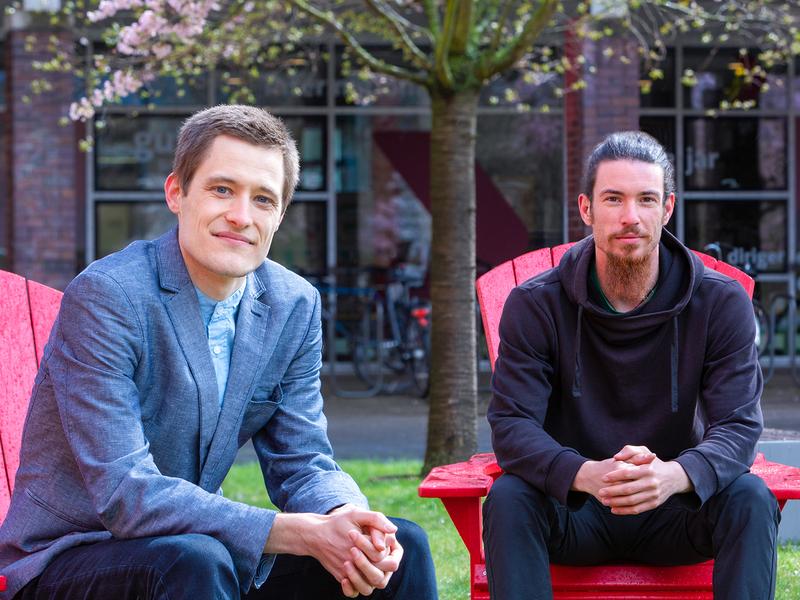 This year’s “CAMPUS AWARD: Research for a Sustainable Future” has been upon the economist Dr. Tobias Wendler from the university and Karl Schrader, a master’s graduate from the Leibniz Centre for Tropical Marine Research (ZMT) and the university.

The award is endowed with 3,000 euros – Wendler will receive 2,000 and Schrader will receive 1,000 euros. In his dissertation, Tobias Wendler investigated the connection between the development of green technologies and environmental damage in the European Union (EU). The term green technologies refers to facilities for the production of electricity, for example wind power plants, but also technologies for the recovery of materials. The data analysis was complicated. Wendler analysed data on patents, as well as data on emissions and resource usage in the 27 EU member states. The investigated period spanned more than 20 years.

The economist, who has a PhD, found out that green technologies do in fact make a special contribution to sustainability. However, they do differ strongly in terms of their resource consumption. “With well-developed recycling technologies, it is possible to achieve goals in a far more expedient and rapid manner,” is how the researcher explains his findings. He believes there to be room for improvement in the mobility industry. Alternative energy production technologies or green transport technologies have not measurably reduced resource consumption to date, according to Wendler. Additionally, the same technology does not always have the same effect. “There are no one-size-fits-all solutions,” states Wendler. It is important that national differences within the EU be addressed and that nation-specific barriers are deconstructed.

“Tobias Wendler Has Thought Outside the Box”

Jury member Nike Fuchs from the Alfred Wegener Institute, Helmholtz Centre for Polar and Marine Research (AWI) praises Tobias Wendler’s dissertation as an “important nudge towards a sustainable future from the viewpoint of a dedicated economist.” She not only underscored the complex data analysis in his work but also the comprehensive observation of the issue of sustainability. “We should look at more than CO2 quantities when we are talking about shaping a sustainable future. This includes the observation of resource usage and thus also resource protection alongside climate protection,” she explains. Wendler has thought outside of the box by working outside of his economic field and he has also addressed societal issues.

Wendler: “Always Take a Look at the Bigger Picture”

“The prize is great confirmation of the fact that economic and social sciences can provide detailed contributions to sustainability,” says Tobias Wendler. “On the path to sustainable development, we not only need to look at technological solutions but also the big picture. We require the public for a transformation that is deeper than small amendments in production and consumer types. Instead of simple solutions, we should be taking a longer look at the societal sense and be moving towards a society that is less driven by material desires.”

For his master’s thesis, Karl Schrader spent half a year in the South pacific island state Fiji. He investigated how fishing in the Rewa Delta close to Suva, Fiji’s capital, effects mangrove crabs. “I wanted to know if a comparably high fishing strain leads to losses in catch figures and the average catch size of individual crabs,” explains the student.

During the study, crabs were caught, determined, counted, measured, and set free again over the course of three months. The numbering of individual crabs ensured that possible changes in location of the individuals would be included in the assessment. Schrader was able to show that local differences in the intensity of fishing the most economically significant mangrove crab of the type Scylla serrata correlates with the average size of the individuals caught. The local fishers report that differences in the catch numbers change, at least in the context of the assessed area, over a larger area and time span. In order to protect the populations, measures, such as the strict adherence to minimum catch sizes, are necessary. Moreover, there need to be rest periods or taboo zones where mangrove crab fishing is stopped entirely, concludes Schrader.

Interest in Work in Fiji Remains

The marine biologist was even able to test one management approach on location when the natives suggested to the Bremen student that they restrict fishing for two months. The short period sufficed in order to determine initial local tendencies towards higher catch numbers.

During his research stay, Karl Schrader developed a trusting relationship with the locals, especially with Peniasi Naimoso, the representative of the Vutia district in the Rewa province. The interest in Schrader’s findings remains great. The researcher has already sent a report with findings and management recommendations to the district representative. The education ministry will also receive a comprehensive final report. Karl Schrader knows: “The success of future protective measures depends on the acceptance received in individual communities, whose fishing grounds are very clearly defined and respected amongst each other.”

Jury member Fabio Nicoletti from the University of Bremen Alumni Network said in his speech: “In his thesis, Karl Schrader carries out research on an urgent ecological problem that is having a negative effect on the food security on the Fiji islands. Thanks to the close cooperation with the local population, he has succeeded together with the affected in better understanding the situation and formulating possible solutions. Both aspects are an important contribution to the maintenance of valuable resources for future generations.”

For Karl Schrader, the prize first and foremost means great appreciation of his work. “It is often difficult to observe or assess your own work in a distanced manner,” he explains. “Just the nomination for the prize was a nice, motivating piece of feedback to get for the time and work I invested. But actually receiving the prize now exceeds any expectations I had. It is a lovely surprise and positively underscores the completion of this phase of my life.”

Since completing his bachelor’s degree in economics, Tobias Wendler has been researching and teaching as part of the “Economics in Innovation and Structural Change” research group led by Professor Jutta Günther at the University of Bremen. It was there that he also began his PhD in 2016, which he successfully completed in 2020. The issues surrounding sustainability also interest him outside of his own research. For Wendler, sustainability is something that runs deeper than simply answering the question of how humans can use nature for its own needs as best as possible. Questions such as “what type of relationship do we want to have with fellow creatures and our environment? To what extent do we want to accept damage to our environment when it is to our advantage?” interest him. He believes these basic attitudes to be the foundation on which we must work. “The current crisis offers us a chance to build on these foundation issues,” says Wendler.

Karl Schrader was born in Berlin and grew up in Mecklenburg-Vorpommern. Stays abroad in South America influenced him – he spent a year in Venezuela as a school pupil. During his bachelor’s degree at Bremen City University of Applied Sciences, he spent a longer period in Brazil, where he, alongside studying, worked for an NGO that protected sea turtles. This was how his interest in the ecology of the tropics was piqued. At the University of Bremen, he decided to read “International Studies in Aquatic Tropical Ecology.” The honoured work forms the final part of the degree course hosted jointly by ZMT and the University of Bremen.