Immune cells out of control: how lethal hyperinflammation emerges from a novel gene defect 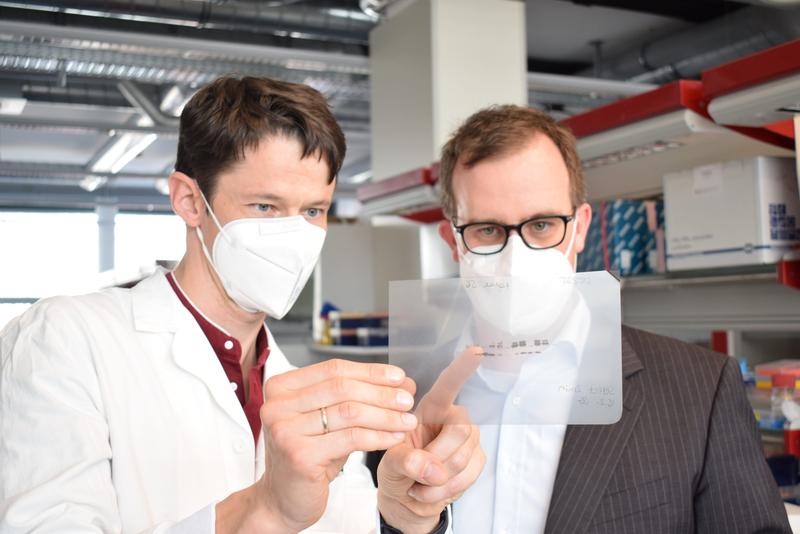 Scientists at St. Anna Children’s Cancer Research Institute, together with their collaborators from Finland and Sweden, discover a novel subtype of a genetic disease: genetically determined deficiency of the protein RhoG abrogates the normal cytotoxic function of specific immune cells, causing hemophagocytic lymphohistiocytosis (HLH). These new findings may help with the genetic diagnosis for patients with a clinical suspicion of HLH. Published in the high-ranked scientific journal Blood, the study provides a basis for both a deeper understanding of the biology of HLH and the exploration of new therapeutic approaches.

As part of an international collaborative effort, scientists at St. Anna Children’s Cancer Research Institute (St. Anna CCRI) illuminate a new etiology of a disease called familial hemophagocytic lymphohistiocytosis (HLH). Occurring usually in early childhood, familial or genetically-determined HLH is one of the most dramatic hematologic disorders. It is characterized by the inability of specific immune cells, namely T lymphocytes and natural killer (NK) cells, to kill an infected (e.g., virus-infected) target cell. As a consequence, the body may secrete biological messengers (so-called cytokines) that generate massive immune activation and hyperinflammation throughout the entire body. “If untreated, the hyperinflammation associated with HLH can be lethal in a short period of time”, says Kaan Boztug, MD, Scientific Director of St. Anna CCRI and senior author of the study.

Until recently, four subtypes of familial HLH had been known, caused by mutations in genes involved in regulating the immune defense. “Now we discovered a new type of this disease, caused by inherited mutations in the gene that encodes the protein RhoG”, explains the first author of the study, Artem Kalinichenko, PhD, Senior Postdoctoral researcher at St. Anna CCRI and Ludwig Boltzmann Institute for Rare and Undiagnosed Diseases (LBI-RUD).
The researchers show how deficiency of RhoG specifically impairs the cytotoxic function of T lymphocytes and NK cells. This results in their uncontrolled activation and ultimately causes HLH.

In particular, RhoG deficiency impairs the process of exocytosis in specific immune cells and disables their killing ability. Immune cells like T and NK cells use exocytosis to release cytotoxic molecules to attack and kill infected or tumor cells. When RhoG deficiency abrogates this function in immune cells, they cannot kill their target cells as intended. “We will explore in more detail, how this potentially affects the propensity to develop cancer”, says Dr. Kalinichenko.

RhoG regulates lymphocyte cytotoxicity
In their study, the scientists investigated an infant who developed severe HLH at the age of four months. While the disease was associated with impaired cytotoxicity of T and NK cells, no mutations were found in known HLH-associated genes. Further genetic analysis revealed deleterious mutations in the gene encoding RhoG. By experimental ablation of RhoG, the scientists confirmed the previously unknown role of RhoG in the cytotoxic function of human lymphocytes. Despite a drastic and specific effect on cytotoxic function, RhoG deficiency does not affect other functions of immune cells that play an important role for the disease development.

“In our study we discovered a pivotal role of RhoG interaction with an exocytosis protein called Munc13-4, essential for anchoring of cytotoxic granules to the plasma membrane”, explains Dr. Boztug. This docking is a critical step in exocytosis. It is required for further fusion of the vesicles with the plasma membrane and the release of the cytotoxic granules.
“Thus, our study illuminates RhoG as a novel essential regulator of human lymphocyte cytotoxicity, and provides the molecular pathomechanism behind this previously unreported genetically determined form of hemophagocytic lymphohistiocytosis”, concludes Dr. Boztug.

Shorter screening process for patients
Based on the understanding of the underlying molecular mechanism of familial HLH, the researchers are looking forward to an improved prognosis and treatment of the disease in the long-term. As a short-term consequence, the here discovered RhoG deficiency can help HLH patients by enabling a genetic diagnosis. “We hope that our understanding of the molecular pathomechanisms of HLH may impact disease management and prognosis”, comments Dr. Boztug.

This study is an exciting breakthrough that brings up new important scientific questions. “The discovery of RhoG deficiency has opened up new insights into the molecular functions of this protein and revealed highly relevant questions. We have found that RhoG regulates both, the ‘cell skeleton’ and the exocytosis machinery. Now we are very keen to know how RhoG coordinates their activity in space and time”, says Dr. Kalinichenko.

Collaborative research on rare diseases
This scientific work was possible thanks to a collaboration of St. Anna CCRI with the LBI-RUD, the CeMM Research Center for Molecular Medicine of the Austrian Academy of Sciences, the Medical University of Vienna, and international partners. Special thanks go to the co-senior authors Janna Saarela (Institute for Molecular Medicine Finland, Helsinki, Finland and Centre for Molecular Medicine Norway, Oslo, Norway) and Mikko R.J. Seppänen (Rare Diseases Center, Children’s Hospital, University of Helsinki, Finland) as well as Yenan T. Bryceson (Karolinska Institute, Stockholm, Sweden). The patient was enrolled in the ongoing FINPIDD study series and is under medical treatment at the Helsinki University Hospital.

About St. Anna Children’s Cancer Research Institute, CCRI
St. Anna CCRI is an internationally renowned multidisciplinary research institution with the aim to develop and optimize diagnostic, prognostic, and therapeutic strategies for the treatment of children and adolescents with cancer. To achieve this goal, it combines basic research with translational and clinical research and focus on the specific characteristics of childhood tumor diseases in order to provide young patients with the best possible and most innovative therapies. Dedicated research groups in the fields of tumor genomics and epigenomics, immunology, molecular biology, cell biology, bioinformatics and clinical research are working together to harmonize scientific findings with the clinical needs of physicians to ultimately improve the wellbeing of our patients.
Learn more:
www.ccri.at
www.kinderkrebsforschung.at

About Ludwig Boltzmann Institute for Rare and Undiagnosed Diseases (LBI-RUD)
LBI-RUD was founded in April 2016 in a joint effort of Ludwig Boltzmann Gesellschaft, CeMM Research Center for Molecular Medicine of the Austrian Academy of Sciences, Medical University of Vienna, and St. Anna Children’s Cancer Research Institute. The three founding partner institutions, and CeRUD Vienna Center for Rare and Undiagnosed Diseases, constitute LBI-RUD’s most important collaboration partners.
Research at LBI-RUD focuses on the deciphering of rare immunological, hematopoietic, nervous, dermal, gastro-intestinal, and hepatic diseases. Those studies provide unique insights into human biology, and are the basis for the development of tailored therapeutic concepts in the sense of the personalized medicine of the future.
The mission of LBI-RUD is – together with its partner institutions – to sustainably develop and maintain research infrastructure integrating scientific, societal, ethical, and economical aspects of rare diseases.
www.rare-diseases.at

About CeMM Research Center for Molecular Medicine of the Austrian Academy of Sciences
The mission of CeMM is to achieve maximum scientific innovation in molecular medicine to improve healthcare. At CeMM, an international and creative team of scientists and medical doctors pursues free-minded basic life science research in a large and vibrant hospital environment of outstanding medical tradition and practice. CeMM’s research is based on post-genomic technologies and focuses on societally important diseases, such as immune disorders and infections, cancer and metabolic disorders. CeMM operates in a unique mode of super-cooperation, connecting biology with medicine, experiments with computation, discovery with translation, and science with society and the arts. The goal of CeMM is to pioneer the science that nurtures the precise, personalized, predictive and preventive medicine of the future. CeMM trains a modern blend of biomedical scientists and is located at the campus of the General Hospital and the Medical University of Vienna.
www.cemm.oeaw.ac.at

About Medical University of Vienna (MedUni Vienna)
MedUni Vienna is one of the most traditional medical education and research facilities in Europe. With almost 8,000 students, it is currently the largest medical training center in the German-speaking countries. With its 30 university hospitals and two clinical institutes, 12 medical theory centers and numerous highly specialized laboratories, it is also one of Europe’s leading research establishments in the biomedical sector.
www.meduniwien.ac.at