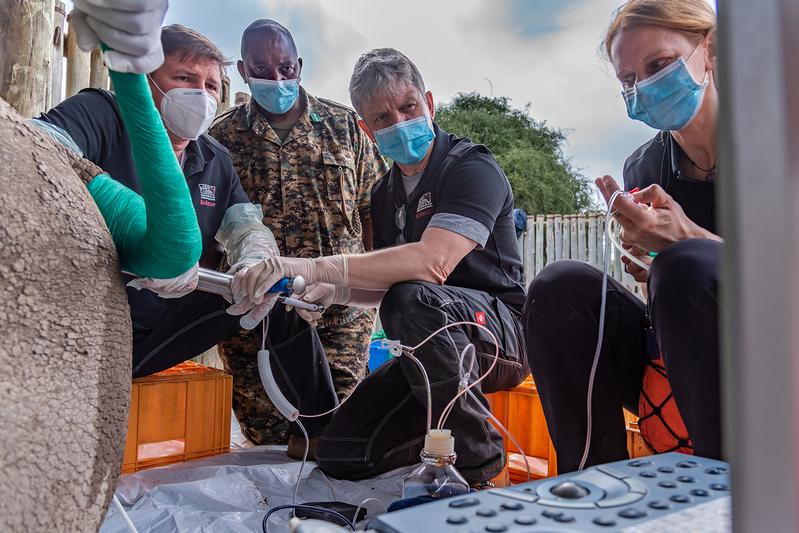 The international consortium of scientists and conservationists working towards preventing the extinction of the northern white rhino through advanced assisted reproduction technologies is pleased to announce that in March and April 2021, four additional northern white rhino embryos were produced.

This is the most successful series of procedures – from oocyte collection in Kenya to in vitro fertilisation and cryopreservation in Italy – the team of Leibniz Institute for Zoo and Wildlife Research (Leibniz-IZW), Safari Park Dvůr Králové, Kenya Wildlife Service, Ol Pejeta Conservancy and Avantea has ever conducted. Additionally, the team confirmed the successful sterilisation of the southern white rhino bull Owuan, which was conducted in December 2020. The bull will now be introduced to the Ol Pejeta southern white rhino females that have been identified as potential surrogate mothers for future northern white rhino offspring.

On March 28th, 2021, 19 oocytes were retrieved from Fatu’s ovaries using a probe guided by ultrasound, after the animal was placed under general anaesthesia. Fatu is the younger of the two northern white rhinos, Najin’s daughter and Sudan’s granddaughter. Both the anaesthesia and the ovum pickup procedure went smoothly and without complications. After incubating and maturing the egg cells at Avantea’s laboratory in Italy, 14 of them were fertilised with thawed sperm from deceased northern white rhino bull Suni using a procedure called intra-cytoplasmic sperm injection (ICSI). Four fertilised oocytes developed into viable embryos that are now stored in liquid nitrogen along with the five embryos already created in previous procedures. There are now a total of nine embryos, all derived from oocytes collected from Fatu.

“We are excited with the laboratory outcome of the last ovum pick-up in March. With nine pure northern white rhino embryos now developed, the partners in the project should embark on the next phase of the project –embryo transfer to the surrogate southern white females at Ol Pejeta Conservancy. We are eager to get the progeny from the project that will guarantee survival of the species”, says Kenya’s Tourism and Wildlife Cabinet Secretary, Hon. Najib Balala.

Embryo development was achieved with the help of Geri®, an innovative benchtop incubator with integrated continuous embryo monitoring capabilities designed to provide an individualised and undisturbed incubation environment, and donated by Merck.
“Merck is a long-term partner to Project BioRescue. We are supporting efforts to save the Northern White Rhinos (NWR) by offering innovative fertility technologies to increase chances to save NWR from extinction”, says Sebastian Bohl, Vice President, Global Head of New Businesses, Fertility, Merck.

During the most recent procedure, Najin, who is now 31 years old, was put under light sedation whilst standing and examined via ultrasound. After the results of the ultrasound, the team decided not to attempt the procedure as she had not appeared to have developed enough promising oocytes. The consortium will soon thoroughly discuss if and how to continue the oocyte collections with Najin, as ethical risk assessments are a pivotal part of the programme.

Another very important step in the success of the BioRescue programme was the selection and sterilisation of the southern white rhino bull Owuan in December 2020. The animal was sterilised by the BioRescue team with a minimally invasive non-surgical procedure using state-of-the-art equipment. The sterilisation went smoothly and without any complications. In March 2021, the BioRescue team confirmed via electroejaculation that the sterilisation was indeed successful. Owuan has recovered well from the examinations and is up to his future role: as a sterilised bull, he will reliably indicate through his behaviour the reproductive cycle of potential surrogate mothers without any risk of impregnating them. This information is a crucial prerequisite for transferring the embryos to surrogate mothers at the correct timing of their reproductive cycle. Under the guidance of Kenya Wildlife Service, the team carefully planned the location of selected southern white rhino females for Owuan’s company and his introduction to them will take place in the coming weeks.

The BioRescue research programme, significantly funded by the German Federal Ministry of Education and Research (BMBF) and additional donors such as foundation Nadace ČEZ, the philanthropist Dr Richard McLellan and Merck EMD foundation, will continue with its ambitious plan to create more embryos from oocytes collected from the northern white rhino females in a three to four-month cycle as long as the COVID-19 pandemic allows for the team to travel to Kenya. With the sterilisation confirmed and relocation of surrogates planned, the next milestone of the programme is getting within reach.

Further information and your support: http://www.biorescue.org

Media Package
A collection of photographs can be accessed through the following link:
https://hidrive.ionos.com/share/xmoqdysq6s

The photographs shall only be used in direct connection with the story depicted in this press release and credit must be “BioRescue/Rio the Photographer”.

Leibniz Institute for Zoo and Wildlife Research (Leibniz-IZW)
The Leibniz-IZW is an internationally renowned German research institute of the Forschungsverbund Berlin e.V. and a member of the Leibniz Association. Our mission is to examine evolutionary adaptations of wildlife to global change and develop new concepts and measures for the conservation of biodiversity. To achieve this, our scientists use their broad interdisciplinary expertise from biology and veterinary medicine to conduct fundamental and applied research – from molecular to landscape level – in close dialogue with the public and stakeholders. Additionally, we are committed to unique and high-quality services for the scientific community.
www.izw-berlin.de

Kenya Wildlife Service
Kenya Wildlife Service (KWS) is a state corporation that was established by an Act of Parliament (Cap 376), now repealed by WCMA (2013), with the mandate to conserve and manage wildlife in Kenya, and to enforce related laws and regulations. KWS undertakes conservation and management of wildlife resources across all protected area systems including community conservancies in collaboration with stakeholders.
kws.go.ke/

Ol Pejeta Conservancy
Ol Pejeta Conservancy is a 90,000-acre wildlife conservancy working to conserve wildlife, to provide a sanctuary for great apes and to generate income through wildlife tourism and complementary enterprises for re-investment in conservation and community development. It is a key conservation area in the wider Laikipia ecosystem and aims to manage sustainable, diverse and healthy wildlife populations in an integrated wildlife and livestock system. Ol Pejeta Conservancy is the largest black rhino sanctuary in east Africa and is the only place in Kenya to see chimpanzees. It is also home to the last two northern white rhinos on the planet. Ol Pejeta’s cutting-edge wildlife security includes a specialised K-9 unit, motion sensor cameras along its solar-powered electric fence, and a dedicated Rhino Protection Unit. Ol Pejeta also integrates livestock with wildlife – both as a means to earn revenue for conservation but also as a rangeland management tool. www.olpejetaconservancy.org/

University of Padua
University of Padua in Italy is one of the oldest in the world, celebrating 800 years. Its Department of Comparative Biomedicine and Food Science is developing leading research and education in the field of wildlife conservation and welfare with a special focus on ethical assessment and evaluation of research projects and educational programs.
www.unipd.it/en/