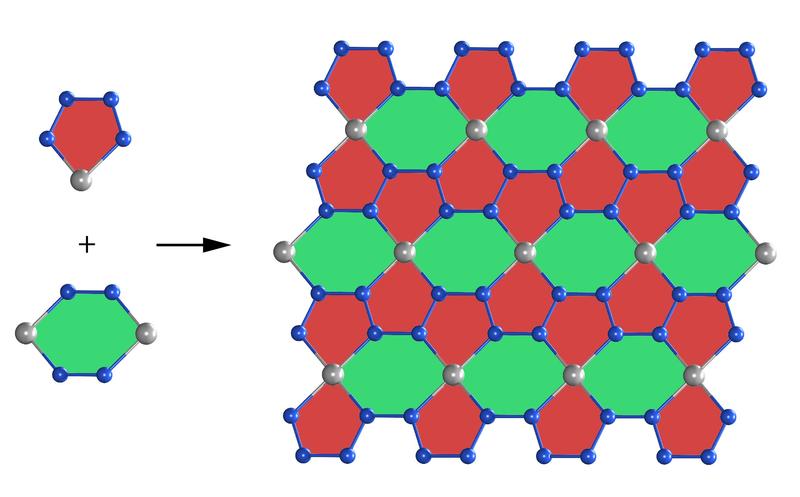 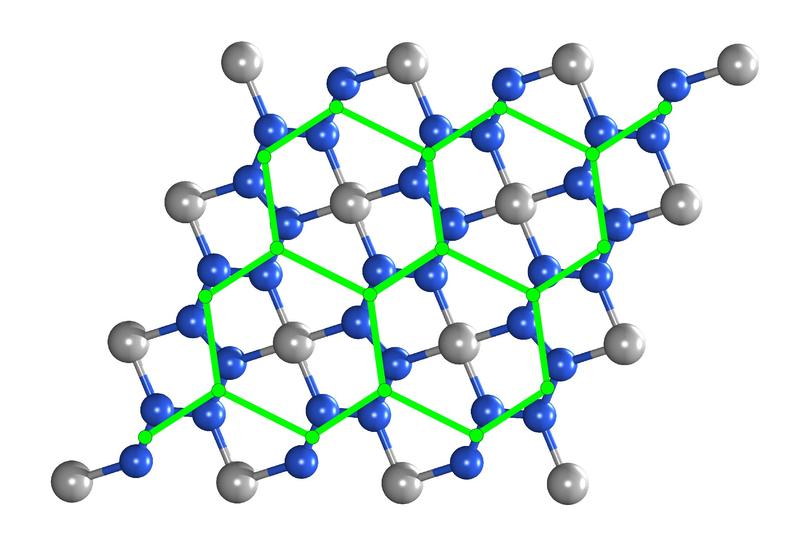 The hexagonal electronic lattice (green) of beryllonitride conforms to its crystal structure, and looks like a slightly distorted honeycomb. This results in electronic properties that could be used for quantum technology applications. | Quelle: Image: M. Bykov.
❮ ❯

An international team with researchers from the University of Bayreuth has succeeded for the first time in discovering a previously unknown two-dimensional material by using modern high-pressure technology. The new material, beryllonitrene, consists of regularly arranged nitrogen and beryllium atoms. It has an unusual electronic lattice structure that shows great potential for applications in quantum technology. Its synthesis required a compression pressure that is about one million times higher than the pressure of the Earth's atmosphere. The scientists have presented their discovery in the journal "Physical Review Letters".

Since the discovery of graphene, which is made of carbon atoms, interest in two-dimensional materials has grown steadily in research and industry. Under extremely high pressures of up to 100 gigapascals, researchers from the University of Bayreuth, together with international partners, have now produced novel compounds composed of nitrogen and beryllium atoms. These are beryllium polynitrides, some of which conform to the monoclinic, others to the triclinic crystal system. The triclinic beryllium polynitrides exhibit one unusual characteristic when the pressure drops. They take on a crystal structure made up of layers. Each layer contains zigzag nitrogen chains connected by beryllium atoms. It can therefore be described as a planar structure consisting of BeN₄ pentagons and Be₂N₄ hexagons. Thus, each layer represents a two-dimensional material, beryllonitrene.

Qualitatively, beryllonitrene is a new 2D material. Unlike graphene, the two-dimensional crystal structure of beryllonitrene results in a slightly distorted electronic lattice. Because of its resulting electronic properties, beryllonitrene would be excellently suited for applications in quantum technology if it could one day be produced on an industrial scale. In this still young field of research and development, the aim is to use the quantum mechanical properties and structures of matter for technical innovations – for example, for the construction of high-performance computers or for novel encryption techniques with the goal of secure communication.

"For the first time, close international cooperation in high-pressure research has now succeeded in producing a chemical compound in that was previously completely unknown. This compound could serve as a precursor for a 2D material with unique electronic properties. The fascinating achievement was only possible with the help of a laboratory-generated compression pressure almost a million times greater than the pressure of the Earth's atmosphere. Our study thus once again proves the extraordinary potential of high-pressure research in materials science," says co-author Prof. Dr. Natalia Dubrovinskaia from the Laboratory for Crystallography at the University of Bayreuth. "However, there is no possibility of devising a process for the production of beryllonitrene on an industrial scale as long as extremely high pressures, such as can only be generated in the research laboratory, are required for this. Nevertheless, it is highly significant that the new compound was created during decompression and that it can exist under ambient conditions. In principle, we cannot rule out that one day it will be possible to reproduce beryllonitrene or a similar 2D material with technically less complex processes and use it industrially. With our study, we have opened up new prospects for high-pressure research in the development of technologically promising 2D materials that may surpass graphene," says corresponding author Prof. Dr. Leonid Dubrovinsky from the Bavarian Research Institute of Experimental Geochemistry & Geophysics at the University of Bayreuth.

The research results published in the "Physical Review Letters" have emerged from a worldwide cooperation of renowned universities and research institutions. Parties to this collaboration were: The University of Bayreuth and the German Electron Synchrotron in Hamburg (Germany); Linköping University (Sweden); Radboud University Nijmegen (Netherlands); the European Synchrotron Radiation Facility in Grenoble (France); the National University of Science and Technology in Moscow and the Ural Federal University in Ekaterinburg (Russia); Wuhan University (China); the Carnegie Institution for Science in Washington, Howard University in Washington, the Center for Advanced Radiation Sources at the University of Chicago, and Argonne National Laboratory (USA). The research work at the University of Bayreuth was funded by the German Research Foundation (DFG), the Federal Ministry of Education and Research (BMBF), and the Alexander von Humboldt Foundation.