Disinfection robot: Value created by linking up to building data 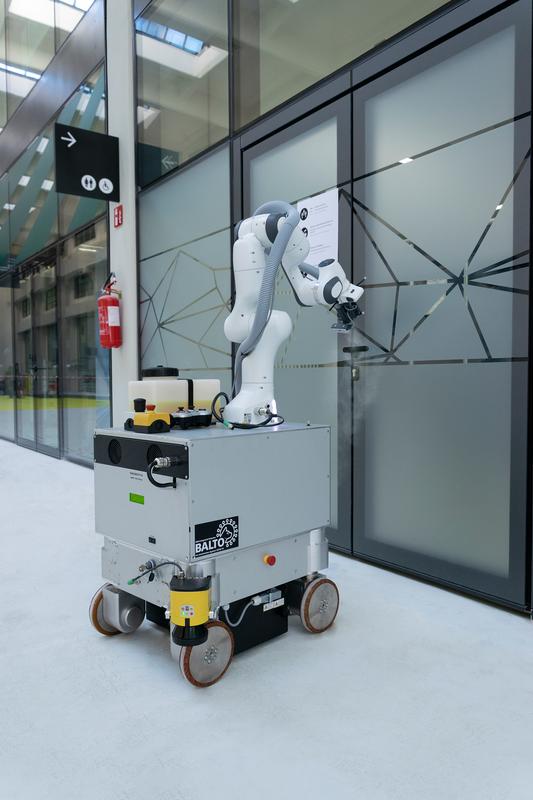 The disinfection robot BALTO — named after a sled dog who carried urgently needed vaccines to a highly inaccessible region of Alaska a hundred years ago — is capable of disinfecting door knobs and similar objects. It does this autonomously, reacting to human beings in the surrounding area at the same time. An interface with the Building Information Modeling (BIM) process makes this possible.

Never before has hygiene attracted so much attention — it is, after all, one of the weapons society is deploying in its effort to survive the coronavirus pandemic. BALTO, the disinfection robot of the Fraunhofer Italia Innovation Engineering Center in Bozen and the Fraunhofer Institute for Industrial Engineering IAO in Stuttgart, developed as part of the Fraunhofer in-house program to combat coronavirus, is addressing this very issue: As one of many modules, its job is to help contain the pandemic and do its very best to avoid others in the future. “BALTO is capable of autonomously disinfecting door knobs and other areas that a large number of people touch on a very regular basis. This is a way of reducing the risk for visitors, as well as the risk for those people who have the job of disinfecting,” says Dr.-Ing. Michael Riedl, Deputy Director of the Fraunhofer Italia Innovation Engineering Center. However, this robot's distinctive feature is not its ability to disinfect per se — other disinfection robots can of course do this as well — but rather its direct link with the Building Information Modeling process, BIM for short. The BIM models store not only the building geometries, but also all fundamental component attributes such as function or materials. The technology can detect and precisely localize even door knobs, for example.

To do its job, the robot needs the relevant building data. It does not make any sense for the robot to create its own building map: This would require not only the BIM data to be regularly updated, but the robot’s data too. The system would be more expensive, trickier to operate and more error-prone. “We have therefore created, on the basis of the open Robot Operating System (ROS), an interface via which the robot can talk directly to the BIM,” explains Riedl. This tells BALTO not only where doors, for example, are located in the building, but also which of these doors are frequently used and from which material the door knobs are made. It can then adapt its disinfection program accordingly. If construction work is blocking access to a particular corridor, BALTO will know this from the BIM and can use the information in its navigation planning. The interface to the BIM is also important for the human-robot interaction. BALTO is designed to sidestep if it encounters one or more people. If this is not possible, the robot stops. But there might be a problem if it stopped in an emergency exit, of all places, and caused an obstruction. Because, however, even the emergency exit pathway is logged in the BIM data, such situations can be avoided via the interface. This interface to the BIM is not unilateral, the traffic is two-way. This allows the robot to coordinate its disinfectant tasks with other BALTO colleagues and report the shared jobs back to the system once completed.

BALTO plans its route by itself

BALTO also scores points when it comes to planning the disinfection routines: “We don’t have to feed the robot with coordinates, we can tell it to disinfect an entire class of objects,” says Günter Wenzel, Head of Department at Fraunhofer IAO. Instead of having to state the locations of each door knob to be disinfected, we can give a general instruction like: Disinfect all frequently used door knobs at X minute intervals. An additional interface, to the digital twin of a building for instance, would open the door for scenarios such as: According to the room planning file, a meeting will be held in this room at the following time. Please do not disinfect in this room during this time. BALTO uses data like this to plan its disinfection routine by itself — starting with the question of which routes are the best ones to choose through to the optimum disinfectant for the materials to be treated.

At NOI Techpark in Bozen, home to both companies and research institutes alike and hence a place where people constantly come and go, already has three BALTO demonstrators in use. For the time being, still permanently monitored by the research team. Another system is in use in the Future Work Lab of Fraunhofer IAO — a combination of production environment and exhibition space — and in the Center for Virtual Engineering ZVE.

BALTO is by no means limited to disinfection. The robot is able to combine disinfection with cleaning routines and will, over the longer term, be able to handle even monitoring and maintenance activities. Meaning: Users will be able to cover a range of tasks using robot systems linked to BIM. The researchers are now collaborating with companies from the disinfection sector to examine which steps need to be accomplished before the industrialization stage is reached.