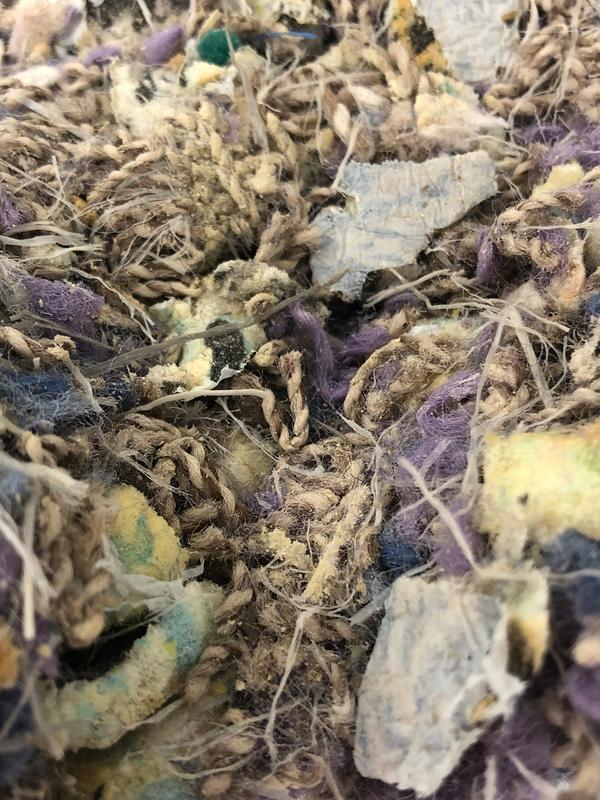 Broken-down carpet waste that is subsequently cleaned and has ionic liquid added to it. | Copyright: © ISOPREP | Download

A significant part of carpet waste consists of petroleum-based polypropylene. As a non-recyclable product, disposing of it has previously meant incineration or landfill. However, a new solvent is now making it possible to recover virgin-standard polypropylene from carpet waste — with no perceptible reduction in quality. Developed by the Fraunhofer Institute for Building Physics IBP and its partners, the process also involves costs that are quite competitive. The development has taken place as part of the ISOPREP EU project.

The EU alone produces around 1.6 million tons of carpet waste every year. The majority of this ends up being sent to landfill or incinerated, as carpet is a composite material that is not suitable for purely mechanical recycling methods. With carpet waste analysed in the project consisting of around a quarter polypropylene, a petroleum-based plastic, the result is a great deal of resources going to waste.

Carpet recycling now possible thanks to a new process

A team of researchers, including from Fraunhofer IBP, has now developed a new recycling process as part of an EU project named ISOPREP (see logo). “For the first time, this is making it possible to recover polypropylene from carpet waste — and the outcome is virgin-quality,” says Maike Illner, a researcher at Fraunhofer IBP. Not only does this allow the recovered polypropylene to be used in lower-quality products (in a process known as downcycling), but it also means that the quality is similar to that of newly manufactured polypropylene, making the material suitable for high-quality products too.

The process is based on a special solvent in the form of an ionic liquid. With the right components, it is able to selectively extract polypropylene from carpet fibers. Before the team of experts applies the solvent, the carpet waste is cleaned — something which involves removing as much of the backing as possible — and broken down. Once the pretreatment is complete, the waste is fed into a reactor in which it undergoes treatment using the solvent. The polypropylene is selectively dissolved in the solvent, a method that provides an effective way of removing dyes and other additives. The process is already being used on an extensive laboratory scale involving several liters of the solvent — and now, the research consortium has set its sights on scaling the process up to a pilot plant with the ability to recycle a ton of carpet waste per day. The pilot plant is set to commence operation by the end of the project in March 2022.

A recycling process can only be deployed on a large scale if its costs are competitive. For this application, this means retaining as much of the expensive ionic liquid as possible in the cycle. “If loss rates can be kept to one percent or less, there is potential for the costs of the process to rival those of producing new polypropylene,” explains Illner. “We know this thanks to a preliminary economic analysis that we conducted at Fraunhofer IBP.” The analysis involved the Fraunhofer researchers investigating the quantities of material and energy that would be required for the process and what kind of product would be output, and then calculating the associated costs. The team also considered how the costs would develop over the long term.

Fraunhofer IBP is focusing on the ecological aspects of carpet recycling. It is able to draw conclusions from factors including a lifecycle assessment, which sheds light on the emissions that are produced during the recycling process, for example. If the consortium is able to achieve its aim of keeping solvent loss rates to one percent or less in this case too, primary energy requirements and greenhouse gas emissions will remain on a similar scale to those involved in producing new polypropylene.

Potential for transfer to other polypropylene waste streams

While carpet waste is the focus of this particular project, the process that has been developed has potential applications far beyond it. The experts involved believe that it could be transferred to a whole host of waste flows that contain polypropylene and are unsuitable for conventional recycling methods. “One example is polypropylene products that contain dyes and additives,” says Illner. “Until now, it has been difficult to extract them from plastic, which means that the recycled polypropylene has only been suitable for use in lower-quality products.” The new process separates the polypropylene not only from other materials, but also from dyes and other additives, allowing it to be used in high-quality applications.

This project has received funding from the European Union’s Horizon 2020 research and innovation program under grant agreement no. 820787.