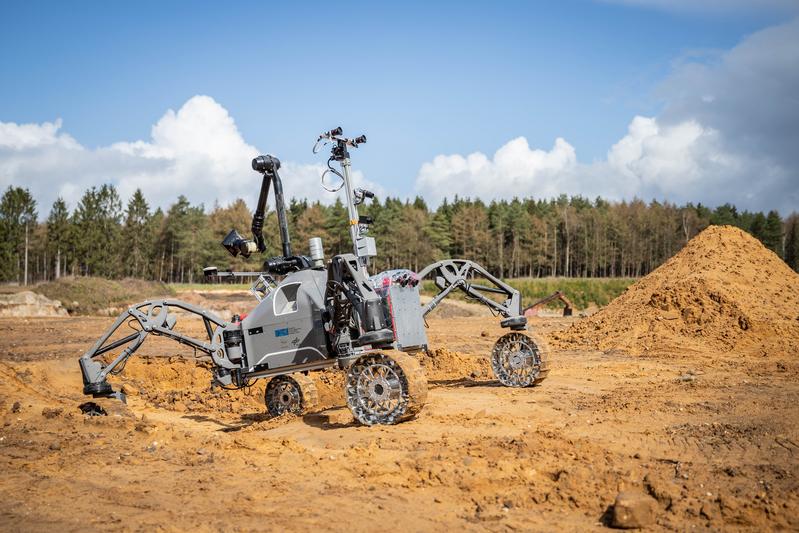 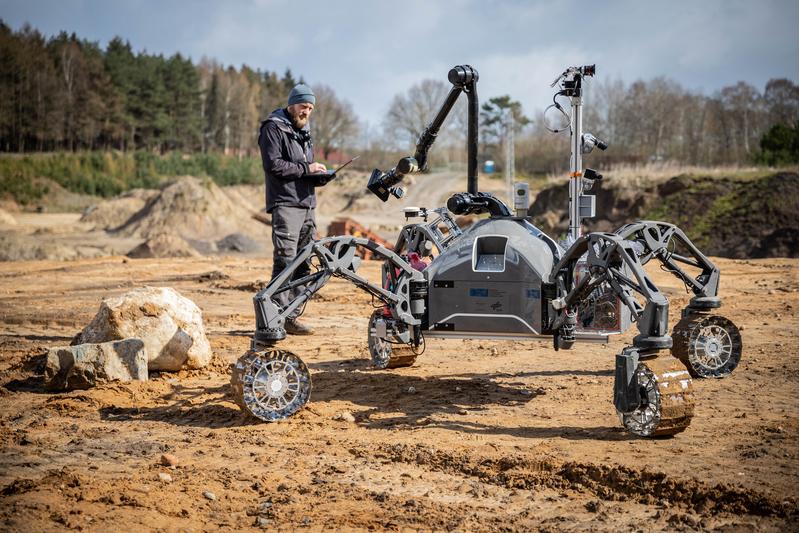 When NASA's rover “Perseverance” and China's rover “Zhurong” travel across the surface of Mars these days, they take crucial decisions without human assistance. To further improve the autonomous capabilities of future space robots and to advance European efforts in this field, the European Union funded the ADE project, which was completed recently in Wulsbüttel near Bremen. There, the rover "SherpaTT" of the German Research Center for Artificial Intelligence (DFKI) managed to autonomously cover a distance of 500 meters in less than three hours thanks to the successful collaboration of 13 European partners.

Robots that explore foreign planets such as Mars or collect samples on the surface of the moon should ideally work as independently as possible. This includes autonomous navigation as well as the autonomous detection and inspection of scientifically interesting spots. Humans can only intervene in extraterrestrial robotic missions to a limited extent due to delayed communication to distant celestial bodies. Therefore, the systems must maneuver the planetary surface based on their sensor data and low-resolution satellite information only, deciding for themselves when it is worth taking a detour to examine for example rock formations more closely.

The aim of the ADE (Autonomous DEcision Making in very long traverses) project, launched in February 2019, was to increase the autonomy capability and reliability of space robots, especially for long-range missions. After more than two years of research, the project ended with a final demonstration in a sand mine near Wulsbüttel, about 40 km north of Bremen. During the field tests from March 18 to April 16, 2021, the hybrid walking and driving rover SherpaTT from the DFKI Robotics Innovation Center was able to autonomously travel a total of 3.7 kilometers and perform various operations with different levels of autonomy thanks to the technologies developed in ADE. During the last test run, the rover needed just under three hours to cover 500 meters (for comparison: According to the space agency's own information, NASA’s Perseverance has a top speed of 152 meters per hour).

With its long-standing expertise in the field of space robotics, the Robotics Innovation Center was part of the project consortium, which was led by the Spanish company GMV and consisted of 13 companies and research institutions from seven different countries. The European Commission funded ADE in the second phase of the Strategic Research Cluster (SRC) "Space Robotics Technologies" as part of the PERASPERA activity under the Horizon 2020 program. The project focused on developing and testing technologies that enable space robots to cover long distances in unknown terrain as part of planetary exploration missions. Meanwhile, the technology also provides autonomous identification of areas of interest in order to collect scientific data.

ADE is based on the ERGO (European Robotics Goal-Oriented Autonomous Controller) autonomy system developed in the first phase of the SRC. This system enables a rover with a given goal to plan, execute and monitor the actions necessary to achieve the goal. A so-called "Opportunistic Science Agent" detects promising features in the environment and reports them to the system. The resulting conflict of goals is resolved by the ADAM (Autonomous Decision Making Module) component, which was created in the predecessing SRC projects and is central in ADE: In compliance with system constraints, on-board resources and temporal restrictions, ADAM autonomously and safely modifies the mission planning. This allows the robot to navigate to the detected spot in order to analyze it at close range.

The SherpaTT rover from the Robotics Innovation Center served as the robotic test platform in ADE. Thanks to its active locomotion system, which allows the robot to travel on wheels as well as step over obstacles with its four extremities, it is particularly well suited for rough terrain. Moreover, the rover is equipped with a centrally mounted robot arm about two meters long, which enables it to take scientific samples and can also be used as support for the body in case a release of weight of the other legs would be needed. In addition to providing the rover system, one of the main tasks of the DFKI research department in Bremen was to develop the simulator, including a mission simulation feature that creates a simulation model from the sensor data sent to the ground station, representing the current state of the mission. Within this model, different paths or robot configurations can be tested: If the rover is facing a narrow passage, for example, different landing gear configurations can first be tried out in the simulation before the most promising solution is sent back to the robot.

The software developed by the project partners was first tested in a 7 x 7 meter indoor sandbox in DFKI's Space Exploration Hall in Bremen. Subsequently, the technologies were to be put to test outside the laboratory in a Mars-like environment. In the predecessing project FACILITATORS, SherpaTT completed an autonomous long-distance mission in the Moroccan desert landscape, having already demonstrated its team capabilities in 2016 in the US state of Utah together with other DFKI robots as part of a sample return mission.
This time, however, the field tests originally planned on the Spanish mainland and the Canary Island of Fuerteventura had to be moved to northern Germany due to pandemic-related travel restrictions. As a result, SherpaTT explored the former Bremen racecourse in the fall of 2020 and made its way through the sand mine near Wulsbüttel in March and April 2021. During the final tests, the robot technology was subjected to various endurance tests for five weeks under typical northern German weather conditions, with the DFKI scientists on site and the partners connected via remote connection. In this way, they were able to successfully test, among other things, autonomous navigation, collecting and depositing samples with the robotic arm, automatic target-oriented mission planning, and the possibility of ad-hoc scientific target acquisition, while also gaining valuable experience in the field of teleoperation for future space missions.

The technologies developed within ADE are designed to meet the requirements of future rovers for space exploration. However, their goal-oriented autonomy system can also be applied to robots working in harsh and hazardous environments on Earth, e.g., in nuclear power plants, rescue operations or in the oil and gas industry. For DFKI and its rover SherpaTT, the mission for European spaceflight continues: In the third and final funding phase of the SRC, the Robotics Innovation Center is leading the CoRoB-X project, launched in March 2021, in which it is researching with European partners how a team of several robots can cooperate in the exploration of lava caves on the moon.

Photo material
At https://cloud.dfki.de/owncloud/index.php/s/e3XomTWj9iSwi88 you can find photo material ready for download. You may use this for your release, stating the source "DFKI GmbH, Annemarie Popp".

Weitere Informationen:
https://www.youtube.com/watch?v=BQqBR_5SwPM Short video with impressions of the field tests in Wulsbüttel