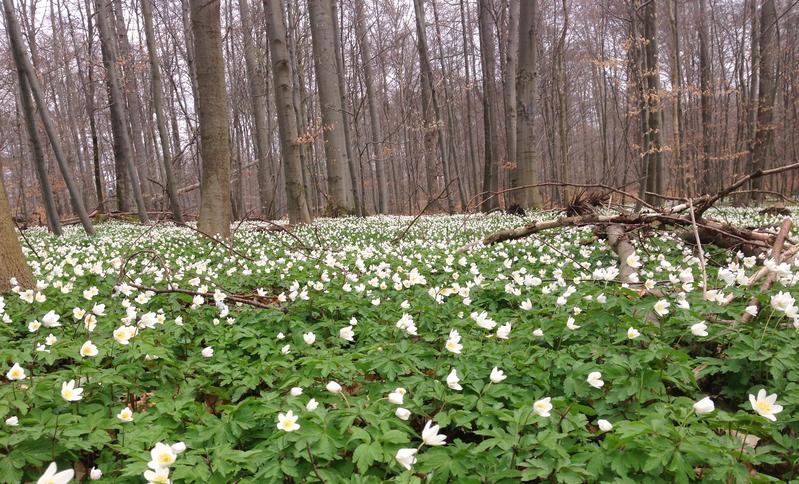 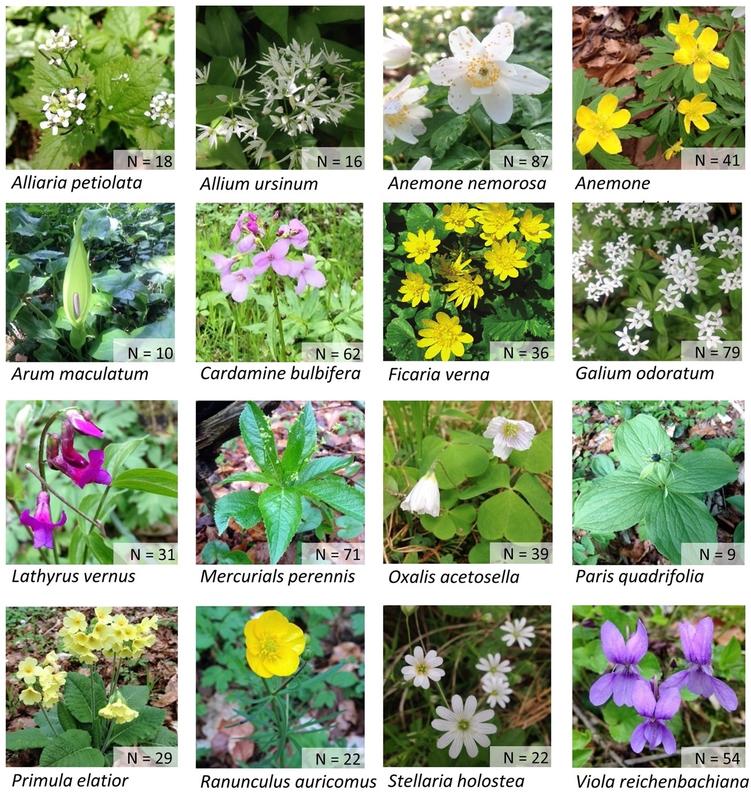 These 16 early-flowering forest understorey species were included in the study. The number at the bottom of each picture shows at how many of the 100 sites a species occurred. | Quelle: Photo: Franziska Willems
❮ ❯

One of the most striking features of global warming is that the life rhythms of plants are changing all over the world. A study at the University of Tübingen has found that human land use can also significantly influence the pace of plant life cycles. In a comparative study, a research team from the Plant Evolutionary Ecology group surveyed one hundred forest sites of different management intensities. The researchers found that in intensively managed forests, spring-flowering plants in the understory, such as wood anemones, wild garlic and wood violets, come into bloom an average of two weeks later than in near-natural forest areas. The study has been published in the latest edition of Ecological Applications.

To thrive and survive, important events in the life of plants must be take place at the right environmental conditions. Above all, plants need to reproduce. “For flowering plants, there is no more important event than flowering. Timing is crucial,” says Franziska Willems, lead author of the new study. Only when flowers are pollinated at the right time do fruits grow, containing seeds that can produce new plants.

The spring-flowering plants in the undergrowth of our forests, which include spring pea, lesser celandine and woodruff, should not open their flowers too early in the year. “They risk being damaged in frost and snow. Or their pollinators, in many cases insects, may not be out yet,” Willems says, “but if they are too late, the foliage of the trees deprives them of light.” The researchers investigated how, in addition to global warming, intensive land use – another driver of global change – affects the life cycles of these flowering plants.

“We monitored the development of wildflowers on a hundred forest plots every week throughout one spring,” working group leader Professor Oliver Bossdorf explains. The forest areas are part of Biodiversity Exploratories, an interdisciplinary project funded by the German Research Foundation to study biodiversity in Germany. The diversity of sites ranges from untouched nature reserves to heavily managed forests. “Plants in intensively used forests flowered on average two weeks later than in near-natural areas. This can largely be explained by the different structures of the forests,” Bossdorf says. The trees planted for timber production are often species that do not naturally occur in the these areas and predominantly conifers.

“These changes influence the microclimate on the forest floor;” Willems adds, “and the proportion of conifers has the greatest influence. But the age of the trees, the size of their crowns and the structural complexity of the forests also play an important role.” For example, conifers produced a cooler forest climate than deciduous trees, causing plants to flower later, the researchers found.

“What is particularly interesting, however, is that the differences in flowering times we identified cannot be explained by temperature alone,” says Willems. The planting of new tree species such as spruce – as well as the altered structure in managed forests – lead to new environmental conditions. For example, light availability or soil properties may change, and these factors could also influence when plants come into bloom.