Team hunts down elusive phonoriton with light trapped in a cavity 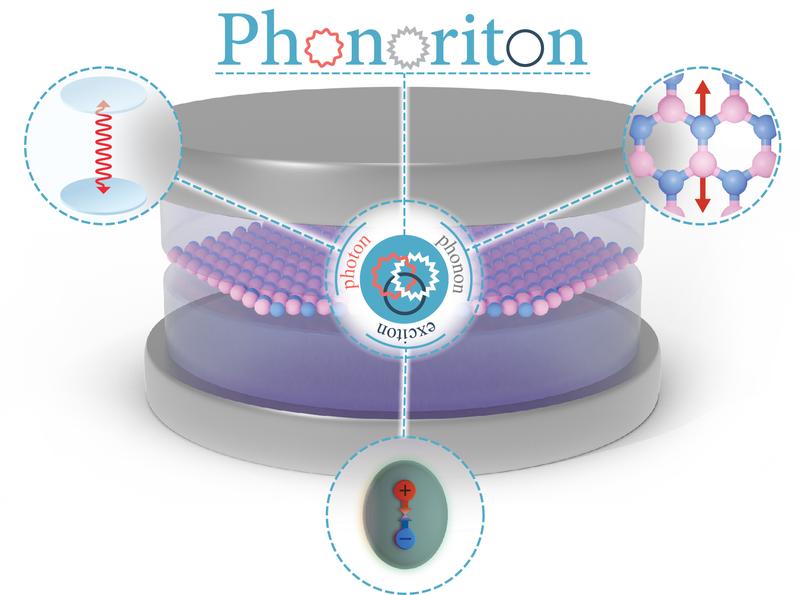 The phonoriton is a three-way hybrid particle made up of excitons, phonons and photons produced by the strong coupling between the material and the confined light inside a cavity. | Copyright: Umberto de Giovannini / Simone Latini, MPSD | Download

Light trapped in a cavity can be used to create a new kind of particle in a solid, consisting of three components at once: light (photons), electronic excitations (excitons) and lattice vibrations (phonons). The use of trapped light represents a completely new way to change the behavior of a material by introducing new interactions between its microscopic components. These findings by scientists from the Max Planck Institute for the Structure of Matter (MPSD) in Hamburg, Germany, and the Massachusetts Institute of Technology (MIT) in the USA have just been published in Physical Review Letters.

Every property of a material is determined by the intricate relations between its microscopic components: the electrons and the nuclei. In particular, the way the electrons couple to the vibrations of the nuclei in a crystal have a profound impact on properties such as the material’s electrical conductivity, superconductivity, and absorption of light. Hence the coupling between the microscopic components of matter is a central topic in condensed matter physics.

Now the MPSD / MIT team has discovered that light in a very confined space can be used to control the coupling between electronic excitations and the vibration of the nuclei – with remarkable effects. The team’s work demonstrates that controlling this coupling process makes it possible to change the way the material absorbs light. These findings highlight the vast potential of confined light for designing interactions among the microscopic components of a material.

The theory group of the MPSD pursues innovative material design approaches, such as engineering material properties via the strong coupling between light and matter that can be achieved when a material is placed inside a cavity (see illustration). The two metal plates of the cavity confine the light in a narrow space and enhance the interaction between photons and the particles in the embedded material. The strong coupling between light and matter particles can drastically change the material‘s properties, potentially leading to novel physics.

In their collaborative work, the researchers predict from first-principles calculations the emergence of a three-way particle resulting from the mixture between excitons (a type of electronic excitation), phonons and photons inside a cavity. This light-matter hybrid particle, dubbed phonoriton, was predicted more than three decades ago by Ivanov and Keldysh. However, it has thus far eluded detection because it was originally proposed in the context of laser physics for laser intensity regimes that would simply destroy the material.

The use of a cavity to enhance the coupling of light with matter not only solves the problem of the destructive laser intensities but also puts the long predicted phonoriton in solids into the range of experimentally realizable conditions, thus enabling the observation of the first three-components particle in solids. In addition to demonstrating the existence of the phonoriton, the team provides experimentally measurable signatures that can be observed in optical absorption and can help to uniquely identify this novel light-matter particle.

These findings are significant because they create a new paradigm for the study of excitations in materials, which have thus far only been thought of as involving a maximum of two constituent particles such as polarons, excitons, polaritons, plasmarons etc. The phonoriton paradigm opens up this zoo of quasiparticles for many novel members arising from three-way combinations.

“This work is a neat example of how light can be used as tool to design interactions between the microscopic components of matter,“ says lead author Simone Latini, a post-doc and former Humboldt fellow at the MPSD. “An experimental verification of our predictions would be extremely exciting. Our experimental collaborators are already working on it and we cannot wait to see their results!”

"I am very excited about this new paradigm of designing interactions in solids by combining known excitations," adds Hannes Hübener, a group leader at the MPSD Theory department.

Fellow MPSD group leader Umberto de Giovannini, also from the Theory department, is thrilled about the findings: “It is great to give new life to a particle proposed a long time ago by Ivanon and Keldysh but never actually observed. This constant work of reviewing and refining known notions as well as the cross-fertilization between concepts lies at the very heart of science."

The team believes that this study only scratches the surface of the potential of cavity matter engineering. It hopes that its results will motivate the scientific community to dig deeper and unveil new exciting physics.