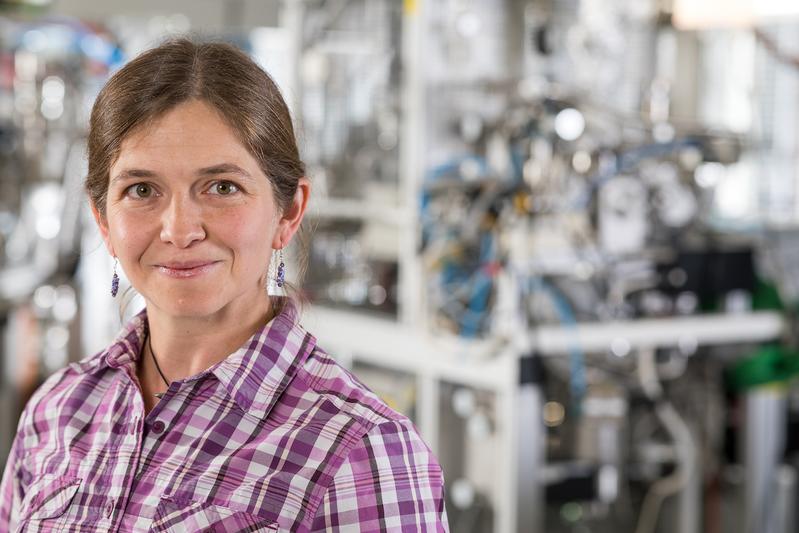 The “Hans Werner Osthoff Plasma Physics Prize 2021” goes to Dr Eve Stenson from Max Planck Institute for Plasma Physics (IPP) in Garching and Greifswald. The prize is awarded for outstanding achievements in the field of plasma physics and promotes young scientists in particular. On 15 June 2021, the award, which is endowed with 3000 euros, will be presented at the final event of the Unique Ideas Competition at University of Greifswald.

The award recognises Eve Stenson’s “pioneering experimental research on positrons”, among other things within the framework of IPP’s APEX research project (A Positron-Electron Experiment). A plasma of electrons and their antiparticles, the positrons, is to be enclosed in a magnetic cage long enough to be studied in detail. Matter-antimatter mixtures in plasma form have never been created before and are expected to have extraordinary properties.

“A milestone on the way to the first generation of an electron-positron plasma in the laboratory”, according to the laudation, was the efficient method developed by Eve Stenson to inject positrons into a dipole magnetic field. The laudation also emphasises Eve Stenson’s research on positron phosphorescence: When setting up a particle trap in which positrons can be stored, she made a remarkable discovery. When she tried to calibrate the phosphorescent screen on the trap, she found that – and why – the response of a phosphorescent screen to electrons and positrons of the same incident energy is different, an important new observation for understanding the interaction of positrons with solid matter. The associated publication in Physical Review Letters 2018 met with great interest among the specialist audience, even outside the field of plasma physics.

In 2019, Eve Stenson was selected to head an IPP junior research group in a competition offered by the Helmholtz Association. To confine a positron-electron plasma, the group wants to build a small superconducting stellarator to complement APEX. In addition to her scientific work, Eve Stenson also acts as a mentor for PhD students and postdocs in this framework.

The “Hans Werner Osthoff Plasma Physics Prize” was endowed in 1994 on the occasion of the founding of the Greifswald IPP site by Professor Dr Hans Werner Osthoff in memory of his years as a student in Greifswald. The award is decided on by an advisory board with representatives of the founder’s family, the Institute of Physics at the University of Greifswald, the Leibniz Institute for Plasma Research and Technology in Greifswald and the Max Planck Institute for Plasma Physics.