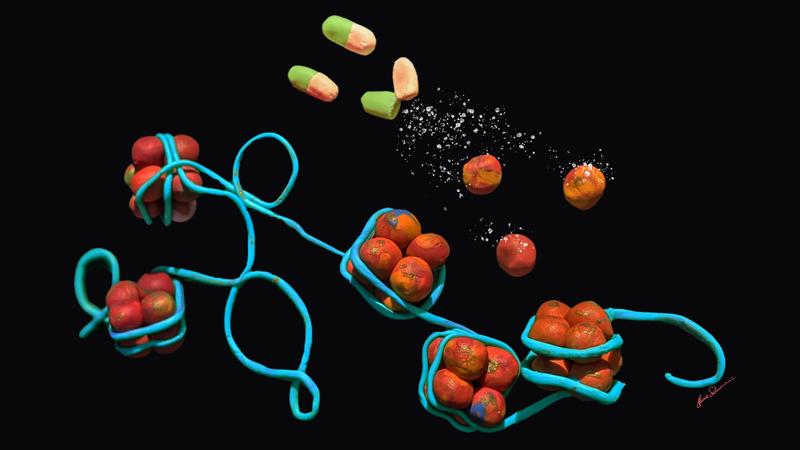 Our genetic material is stored in our cells in a specific way to make the meter-long DNA molecule fit into the tiny cell nucleus of each body cell. An international team of researchers at the Max Planck Institute for Biology of Ageing, the CECAD Cluster of Excellence in Ageing research at the University of Cologne, the University College London and the University of Michigan have now been able to show that rapamycin, a well-known anti-ageing candidate, targets gut cells specifically to alter the way of DNA storage inside these cells, and thereby promotes gut health and longevity. This effect has been observed in flies and mice.

Our genetic material lies in the form of DNA in every cell nucleus of our body cells. In humans, this DNA molecule is two meters long – yet it fits into the cell nucleus, which is only a few micrometres in size. This is possible because the DNA is precisely stored. To do this, it is wound several times around certain proteins known as histones. How tightly the DNA is wound around the histones also determines which genes can be read from our genome. In many species, the amount of histones changes with age. Until now, however, it is unclear whether changes in cellular histone levels could be utilized to improve the ageing process in living organisms.

The drug rapamycin recently became one of the most promising anti-ageing substances and shows positive effects on health in old age. “Rapamycin turns down the TOR signalling pathway that regulates a wide spectrum of basic cellular activities such as energy, nutritional and stress status. In short, we use rapamycin to fine-tune the master regulator of cellular metabolism”, explains Yu-Xuan Lu, postdoc in the department of Linda Partridge and first author of the study. “Meanwhile, we know that histone levels have a critical impact on the ageing process. However, we had no idea whether there is a link between the TOR signalling pathway and histone levels, and more importantly, whether histone levels could be a druggable anti-ageing target.”

To study the effect of rapamycin on histone proteins, the researchers analysed various organs of the fruit fly Drosophila melanogaster. “We looked in different tissues and organs of the fly for noticeable changes in histone levels before and after treatment with rapamycin, this means before and after switching off the TOR signalling pathway”, explains Yu-Xuan Lu. “Surprisingly, we observed an increase in histone proteins after rapamycin treatment. This effect occurred exclusively in the gut of the flies, but not in other tissues.” In further experiments, Yu-Xuan Lu and his colleagues were able to show that the increased levels of certain histone proteins in a specific gut cell type called enterocytes reduced tumour growth, improved gut health and extended lifespan of the animals. Similar observations were made in mouse gut enterocytes after rapamycin treatment.

“Our results show for the first time a link between the TOR signalling pathway and histone levels that determines longevity”, says Yu-Xuan Lu. “The increased levels of histone proteins subsequently change how the DNA is stored in the nucleus. The fact that we were also able to make similar observations in mice shows that this is a widespread mechanism.” Looking ahead to future experiments, he adds: “Given the central role of histones on DNA storage in the cell, this finding not only broadens our knowledge on the ageing process, but also provides new possibilities for targeted therapeutic interventions against ageing.”

This project has received funding from the European Union’s Horizon 2020 research, the Glenn Foundation for Medical Research, and the Max-Planck-Gesellschaft. Yu-Xuan Lu was supported by an EMBO Long-Term Fellowship.