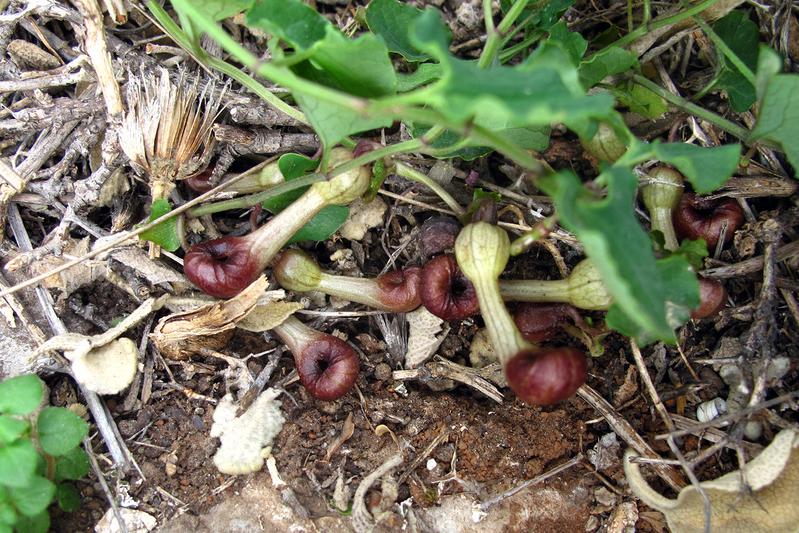 In a new study, an international team of plant researchers including the Institute of Botany at Technische Universität Dresden has discovered an unusual and previously unknown reproductive strategy in plants: the Greek pipevine species 'Aristolochia microstoma' produces a unique mixture of volatiles that resembles the smell of dead and decaying insects to attract the pollinating fly genus 'Megaselia' (also known as 'coffin flies') to its trap-flowers. The study was recently published in the open-access journal ‘Frontiers’.

Plants use numerous mechanisms for their pollination. Now botanists have discovered a particularly sophisticated system among pipevines that is based purely on deception.
The flowers of the Greek plant Aristolochia microstoma emit a foul, musty scent that seems to mimic the smell of decaying insects. The fly pollinators from the genus Megaselia likely get attracted to this odor while searching for arthropod corpses to potentially mate over and lay their eggs. Then, when entering the tube of an Aristolochia flower, the flies are guided by downward-pointing hairs into a small chamber, which holds the female and male floral organs. Trapped inside, they deposit pollen they carry onto the stigma, before the stamens ripen and release pollen on the body of the flies. When the hairs that block the entrance to the chamber wither, the pollinators can escape, and a new cycle can begin.

“Here we show that the flowers of A. microstoma emit a highly unusual mix of volatiles that includes alkylpyrazines, which are otherwise rarely produced by flowering plants. Our data suggest that this is the only plant species known so far to deceive pollinators attracted to the smell of dead and rotting arthropods, rather than vertebrate carrion,” says corresponding author Prof Stefan Dötterl, the head of the plant ecology group and the Botanical Garden at the Paris-Lodron University of Salzburg, Austria.

Between 4-6% of flowering plants are deceptive: they use odor, color, and / or tactile signals to advertise a reward to pollinators, such as nectar, pollen, or mating and breeding sites, but do not actually give this reward. The deception works because pollinators are poor at distinguishing between the reward and the mimic. Deceptive pollination is typical of many orchids, but has also independently evolved many times in other plants, including the genus Aristolochia.

“Aristolochia contains over 550 species spread around the world, especially in tropical and subtropical areas. Aristolochia species are mostly woody vines and herbaceous perennial plants with spectacular, complex flowers that temporarily imprison their visitors for pollination purposes”, explains Prof Christoph Neinhuis, co-author of the study, who cultivates one of the largest Aristolochia collection worldwide at the Botanical Garden of TU Dresden.

“Many Aristolochia are known to attract flies with floral scents, for example mimicking the smell of carrion or feces of mammals, decaying plants, or fungi,” says Thomas Rupp, first author of the study. “But our curiosity was piqued by A. microstoma, a small herb known only from Greece: unlike other Aristolochia with their colorful, showy flowers, A. microstoma has inconspicuous brownish flowers that lie horizontally – close to the ground or partly buried, among leaf litter or between rocks.”

“A. microstoma flowers emit a simple but highly unusual mix of scents that includes 2,5-dimethylpyrazine, a molecule that does not occur in vertebrate carcasses or feces, but in dead beetles. The unpleasant, carrion-like scent can be noticed by people even at a short distance,” concludes botanist Prof. Stefan Wanke from TU Dresden.

Caption: Unlike other Aristolochia species with their showy flowers, A. microstoma has inconspicuous brownish flowers that are horizontal, partially buried or close to the ground under leaf litter or stones. The flowers emit an unpleasant, carrion-like odor to attract and trap pollinators.