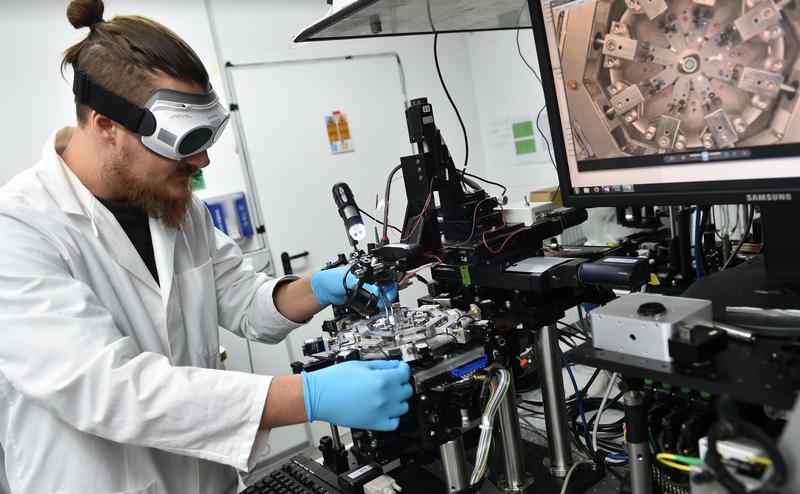 Fragmentation of the lens with a laser should make it possible in the future to preserve its natural elasticity after "lens refilling". | Copyright: Photo: LZH | Download

In eye surgery for cataract, the lens refilling method could allow to maintain or restore the lens's accommodation of the lens, i.e. the ability to adjust its refractive power flexibly. So far, however, this method has not yet been clinically successful. The Laser Zentrum Hannover e.V. (LZH) is now working within a new research project with ROWIAK GmbH to advance the method further.

In lens refilling, the interior of the lens is replaced with a gel, and the lens is "refilled". Complications can arise in which the lens capsule becomes cloudy, or the capsular bag stiffens. Thus, after the operation, either the patient's vision would be impaired, or the accommodation of the lens would be limited. In the "Lens-Refilling" project, LZH scientists and the LZH spin-off ROWIAK GmbH want to develop a new approach. The idea is to precisely remove only the nucleus of the eye lens and replace it with lens refilling. To this end, they are developing and evaluating a method with which they can technically implement lens nucleus fragmentation while fully preserving the physiological structures.

Preserving the cortex and thus accommodation

The lens cortex would remain untouched with this new method of nuclear fragmentation using femtosecond lasers. This would likely prevent the complications mentioned above. Thus, it would be possible to restore accommodative ability after lens refilling.

Enabling an alternative to artificial lenses

This method could be used for age-related lens opacities, such as cataracts, or to compensate for presbyopia. Currently, the damaged lens is usually removed and replaced with an artificial one. However, this artificial lens cannot accommodate itself, and the patient loses the ability to see sharply at any distance. The new method would help reduce the risk of postoperative cataracts. Patients should be able to go for a longer time without having to undergo another operation.

The project "Fragmentation of the eye lens nucleus using a femtosecond (fs) laser to restore accommodation by lens refilling" is supported by the NBank with funds from the European Regional Development Fund.