Discovery of the largest rotation in the universe 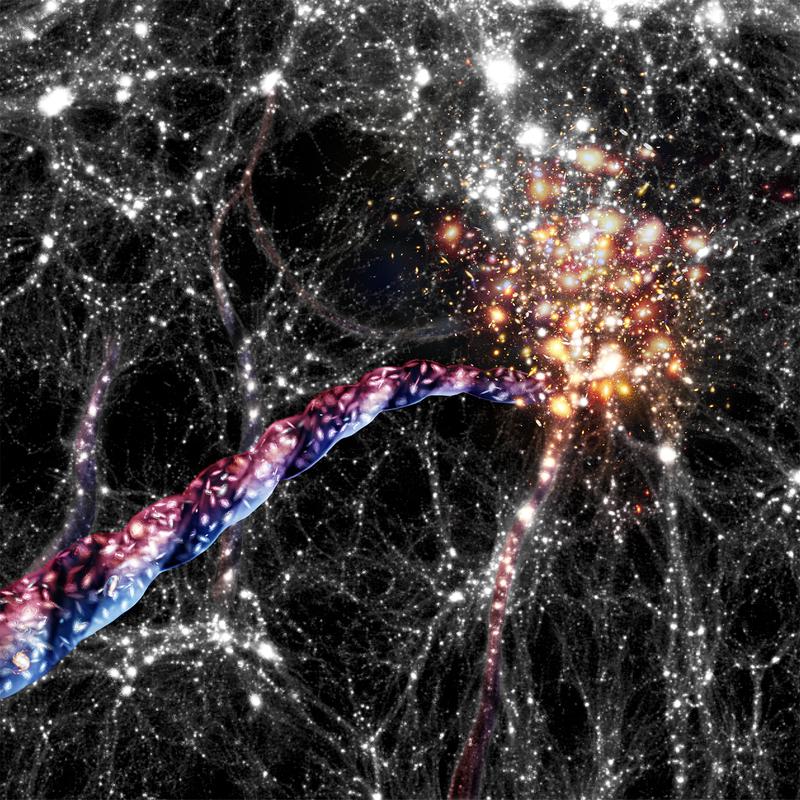 By mapping the motion of galaxies in huge filaments that connect the cosmic web, astronomers at the Leibniz Institute for Astrophysics Potsdam (AIP), in collaboration with scientists in China and Estonia, have found that these long tendrils of galaxies spin on the scale of hundreds of millions of light years. A rotation on such enormous scales has never been seen before. The results published in Nature Astronomy signify that angular momentum can be generated on unprecedented scales.

Cosmic filaments are huge bridges of galaxies and dark matter that connect clusters of galaxies to each other. They funnel galaxies towards and into large clusters that sit at their ends. “By mapping the motion of galaxies in these huge cosmic superhighways using the Sloan Digital Sky survey – a survey of hundreds of thousands of galaxies – we found a remarkable property of these filaments: they spin.” says Peng Wang, first author of the now published study and astronomer at the AIP. “Despite being thin cylinders – similar in dimension to pencils – hundreds of millions of light years long, but just a few million light years in diameter, these fantastic tendrils of matter rotate,” adds Noam Libeskind, initiator of the project at the AIP. “On these scales the galaxies within them are themselves just specs of dust. They move on helixes or corkscrew like orbits, circling around the middle of the filament while travelling along it. Such a spin has never been seen before on such enormous scales, and the implication is that there must be an as yet unknown physical mechanism responsible for torquing these objects.”

How the angular momentum responsible for the rotation is generated in a cosmological context is one of the key unsolved problems of cosmology. In the standard model of structure formation, small overdensities present in the early universe grow via gravitational instability as matter flows from under to overdense regions. Such a potential flow is irrotational or curl-free: there is no primordial rotation in the early universe. As such any rotation must be generated as structures form. The cosmic web in general and filaments, in particular, are intimately connected with galaxy formation and evolution. They also have a strong effect on galaxy spin, often regulating the direction of how galaxies and their dark matter halos rotate. However, it is not known whether the current understanding of structure formation predicts that filaments themselves, being uncollapsed quasi-linear objects, should spin.

“Motivated by the suggestion from the theorist Dr Mark Neyrinck that filaments may spin, we examined the observed galaxy distribution, looking for filament rotation,” says Noam Libeskind. “It's fantastic to see this confirmation that intergalactic filaments rotate in the real Universe, as well as in computer simulation.” By using a sophisticated mapping method, the observed galaxy distribution was segmented into filaments. Each filament was approximated by a cylinder. Galaxies within it were divided into two regions on either side of the filament spine (in projection) and the mean redshift difference between the two regions was carefully measured. The mean redshift difference is a proxy for the velocity difference (the Doppler shift) between galaxies on the receding and approaching side of the filament tube. It can thus measure the filament’s rotation. The study implies that depending on the viewing angle and end point mass, filaments in the universe show a clear signal consistent with rotation.