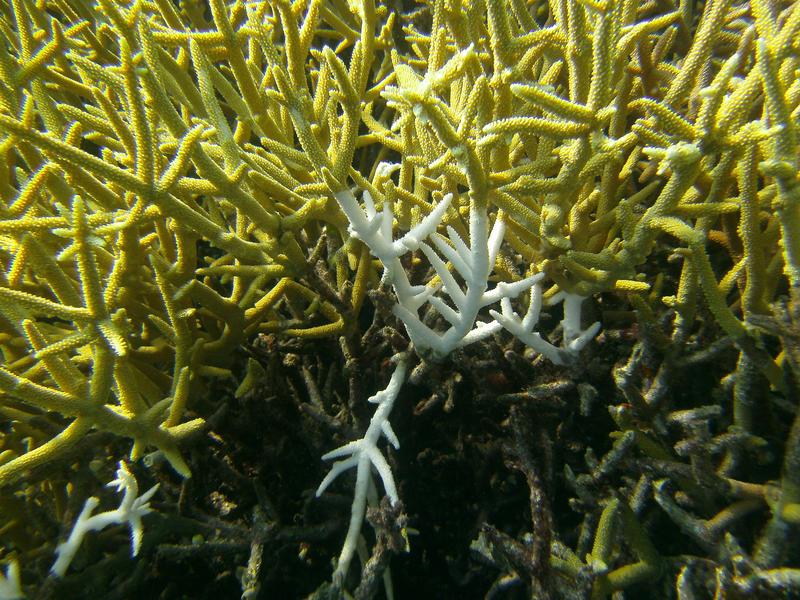 How high is the extinction risk of coral in our oceans? FAU researcher Nussaïbah Raja Schoob used artificial intelligence to examine data from species that became extinct millions of years ago to assess this risk. | Quelle: Wolfgang Kießling | Copyright: Wolfgang Kießling

The traits of coral species that have become extinct during the last few million years do not match those of coral species deemed at risk of extinction today. In a recently published article in the journal ‘Global Ecology and Biogeography’, a research team at the Friedrich-Alexander-Universität Erlangen-Nürnberg (FAU) is therefore proposing that the International Union for Conservation of Nature (IUCN) revises its Red List of Threatened Species for coral.

The list categorises around a third of all 845 coral species that build reefs as endangered. The Red Lists published by the IUCN are considered extremely reliable as they are compiled by leading experts who regularly investigate how species populations have developed over the course of the last few years and decades. In conjunction with other factors such as conservation efforts or foreseeable influences such as climate change, these figures reliably predict the risk posed to a species in the future. ‘Unfortunately, it is extremely difficult to identify such trends for coral populations using the data currently available,’ explains Prof. Dr. Wolfgang Kießling,

Nussaïbah Raja Schoob at the Chair of Palaeoenvironmental Research (Prof. Kießling) at FAU therefore used an alternative method to investigate the extinction risk in reef coral in a collaborative project involving teams from the University of Queensland, Australia, and the University of Iowa in the USA. Schoob, who is a geoscientist, first investigated which traits the coral species on the Red List have in common. Climate change plays a significant role in the risk to this group. A similar phenomenon occurred during the last five million years when a land bridge formed between North and South America, which permanently shut down a strong ocean current from the Pacific into the Caribbean. This caused considerable changes to extremely important characteristics in the seawater such as temperature and salt content. At this time,18 species of coral disappeared from the Caribbean, and six of these species even became extinct. ‘We wanted to know which traits make coral species particularly sensitive to such significant changes and which traits improve their resilience,’ explains Nussaïbah Raja Schoob.

Schoob investigated a series of parameters such as the greatest water depth at which coral is found, the temperatures their larvae tolerate, how fast coral grows and which types of algae coral form symbiotic relationships with. Using machine learning, computer programmes identified similarities in the species that disappeared from the Caribbean in the past as well as in those which survived. Artificial intelligence was then used to identify the shared traits of the coral species categorised as endangered by the IUCN. Only 18 percent of the species on the Red List matched the results of the machine learning study based on palaeoenvironmental data.

‘These results contradicted all our expectations and we were therefore very puzzled by them,’ remembers Wolfgang Kießling. The researchers reviewed their findings to identify what had caused this discrepancy. It was unlikely that data from the coral populations of the past millions of years in the Caribbean had caused the unexpected findings. ‘This data is based on facts that we can observe and measure,’ explains Wolfgang Kießling. The scientists began to wonder if the problem was related to the Red Lists data.

This is where Nussaïbah Raja Schoob made a significant finding. The established and very successful system used by the IUCN to predict the risk to future populations of a species based on its population dynamics quickly reached its limits when examining reef-building coral. ‘There is hardly any data about population dynamics,’ explains Nussaïbah Raja Schoob. The IUCN had to adjust its methods and assessed the risk of extinction according to the changes in the surface area covered by coral reefs. ‘Even though this data is very important for the protection of coral reefs, which play an extremely important role for marine life they simply do not provide enough information about the risk to individual species for a very simple reason: Coral can also grow outside a reef directly on the sea floor, and this is quite common,’ explains Wolfgang Kießling. This means that there are usually still a few billion individuals of the species categorised as endangered, growing scattered on the ocean floor, which cannot simply just die off there simultaneously.

‘Our results show how important data from species that became extinct a long time ago is for assessing the risk for species that are alive today,’ explains Nussaïbah Raja Schoob. These palaeontological findings are a valuable source of data for developing the IUCN methods. Even if this means that the risk status of some coral species could be reduced, the study gives anything but the all-clear. ‘Coral reefs still continue to disappear, and with them a fantastic habitat that is very important for our oceans,’ says Wolfgang Kießling.