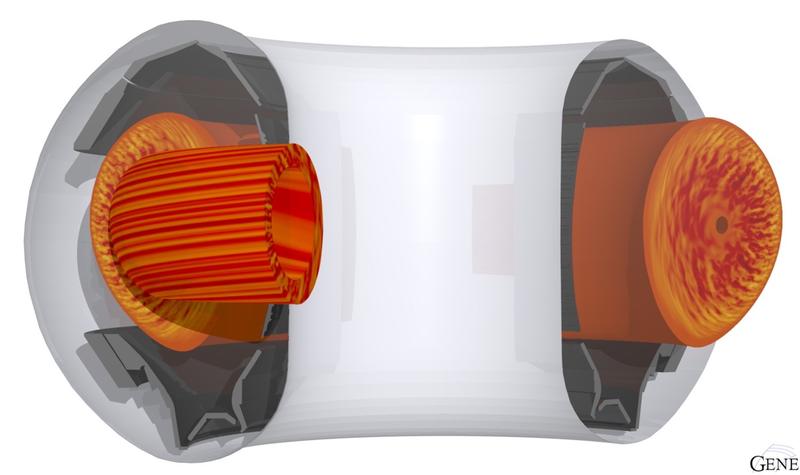 Major advances in plasma modelling and simulation / Prediction instead of interpretation

A recent publication from Max Planck Institute for Plasma Physics (IPP) on the theoretical prediction of a novel transport barrier in a fusion plasma and its subsequent experimental confirmation (Physical Review Letters) exemplifies how dramatically the power of plasma simulations and modelling has grown in recent years. A Europe-wide project on plasma theory and simulation is to enhance this development. The aim is to create virtual plasma models as digital twins of real plasmas.

A new type of transport barrier in fusion plasmas that improves the magnetic confinement of the plasma was predicted by a team of theorists at IPP with the help of state-of-the-art simulations. Caused by fast plasma particles, the barrier should be able to strongly suppress turbulences in the plasma locally. An experiment planned according to corresponding specifications in the Garching ASDEX Upgrade fusion device was subsequently able to confirm this theoretical prediction: fast particles generated by precisely applied heating of the plasma with radio waves created an area in the centre of the plasma with the expected improved confinement properties. The work has now been accepted for publication by the the scientific journal Physical Review Letters (A. Di Siena et al., preprint: http://arxiv.org/abs/2010.14839).

“This great success of theory,” says Professor Frank Jenko, head of Tokamak Theory division at IPP in Garching, “is just one of many examples that show how dramatically plasma simulations and modelling have improved in recent years.” The available computer power has also greatly increased, so that sophisticated computational models have become able to describe the complex physics of plasma very well. This makes quantitative predictions possible - a “giant leap forward” compared to the past twenty years: “Instead of merely interpreting measurement data, as was previously the case,” says Frank Jenko, “theory and simulation now provide models with reliable predictive power in many subject areas”. In addition, in the supercomputer theory can now bring together phenomena that were previously studied separately – such as the physics of fast particles and turbulence – and thus elucidate increasingly complex relationships.

In the European fusion programme, coordinated by the EUROfusion consortium, the aim is to use the new possibilities to optimally prepare the operation of the international ITER experiment and the design of the DEMO demonstration power plant planned to follow. With strategically selected projects, the E-TASC initiative (EUROfusion - Theory and Advanced Simulation Coordination) is providing a new structure for this part of the research. A Europe-wide coordinated work programme on open key questions in theory, simulation, verification and validation – supported by new standard software to be developed – is to advance the development of predictive power in plasma physics, materials science and engineering.

Of the fourteen research projects selected in this framework for the work plan for 2021 to 2025, which EUROfusion awarded to scientists throughout Europe, five went to IPP in Garching and Greifswald. Also, one of the five expert teams for high-performance computing and code optimisation will be based here. “The ambitious goal we are pursuing with E-TASC is to create virtual plasma models as digital twins of real plasmas,” explains Frank Jenko, one of the two chairs of the E-TASC Scientific Advisory Board. This “plasma in the computer” is to be gradually joined by models of other DEMO subsystems in order to gradually build up a digital design and simulation capability for the power plant that is as comprehensive as possible.