Heat from Below: How the Ocean is Wearing Down the Arctic Sea Ice 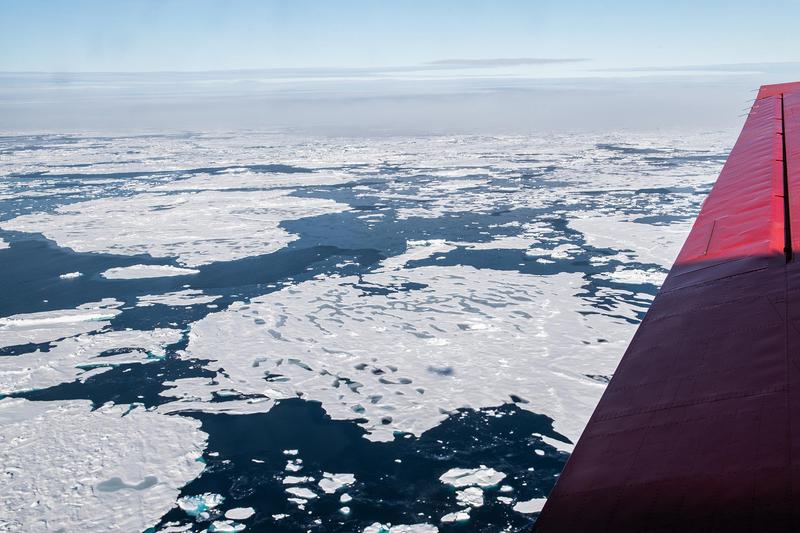 The influx of warmer water masses from the North Atlantic into the European marginal seas plays a significant role in the marked decrease in sea-ice growth, especially in winter. Sea-ice physicists from the Alfred Wegener Institute, Helmholtz Centre for Polar and Marine Research (AWI), together with researchers from the US and Russia, now present evidence for this in two new studies, which show that heat from the Atlantic has hindered ice growth in the Barents and Kara Seas for years.

Furthermore, they demonstrate that the invasion of warm Atlantic water masses further east, at the northern edge of the Laptev Sea, can have such a long-term impact on the increase in ice thickness that the effects are evident a year later, when the ice has drifted towards Greenland via the North Pole and leaves the Arctic through Fram Strait. This study also includes data from the MOSAiC expedition.

Marine researchers refer to this increasing influx of warm Atlantic water masses into the Arctic Ocean as ‘Atlantification’. To date, this process has mainly been investigated from an oceanographic perspective. In two new studies, AWI sea-ice physicists have, for the first time, estimated the effects of the input of heat on the sea-ice growth in the Arctic. Of note here: in those places where the sea ice completely melts in summer, in the following winter the sea releases especially large amounts of heat into the atmosphere. As a result, the sea freezes so rapidly that it compensates for the summertime ice losses. “Young, thin sea ice conducts heat significantly better than thick ice, and therefore less effectively protects the sea from cooling. At the same time, more water freezes on the underside of the ice, which is why thin ice grows more quickly than thick ice,” explains AWI sea-ice physicist Dr Robert Ricker.

The important winter growth no longer takes place as smoothly in all marginal seas, as Ricker and colleagues found using long-term data on the thickness, concentration and drift of Arctic sea ice. “We analysed satellite data from the ESA Climate Change Initiative and found that in the period from 2002 to 2019, less and less sea ice formed, especially in the Barents Sea and Kara Sea,” Ricker reports. In the East Siberian Sea, as well as in the Beaufort and Chukchi Seas, on the other hand, the winter ice production is still great enough to compensate for the losses in summer.

To determine the cause of these varying regional trends, the researchers simulated the interaction between the ocean, ice, wind, and air temperature for the past four decades using two coupled ice-ocean models. Both simulations led to the same conclusion. “The warm water masses that flow from the North Atlantic into the Arctic Ocean are responsible for slowing or even preventing ice growth in the Barents and Kara Seas. If new ice does form, it’s significantly thinner than before,” says Ricker, adding: “If Atlantification persists to this extent, and the winter temperatures in the Arctic continue to rise, in the long term we will also see changes in the regions of the Arctic Ocean further east. In that case, the ice cover in the Arctic Ocean will decline and become thinner and more fragile than it already is.

In the second study, AWI sea-ice physicists report on the first indications that the rising ocean heat is also slowing ice formation in the Laptev Sea, which also includes measurements of the ice floe from the one-year MOSAiC expedition in late summer 2020. In it, the researchers analyse the long-term data from their sea-ice thickness measuring programme in the Arctic, ‘IceBird’, and trace the origins of the unusually thin sea ice that they observed from the research aeroplane in the northern Fram Strait in summer 2016. At that time, the ice was just 100 centimetres thick, making it 30 percent thinner than in the previous year – a difference that the researchers were initially unable to explain. “To solve the puzzle, we first retraced the ice’s drift route with the help of satellite images. It originated in the Laptev Sea,” explains AWI sea-ice physicist Dr Jakob Belter. The experts then examined the weather along the route. However, the atmospheric data for the period 2014 to 2016 didn’t show any abnormalities.

That meant the answer had to lie in the ocean – and indeed: from January to May 2015, experts from the University of Alaska Fairbanks recorded unusually high temperatures in the waters north of the Laptev Sea. We now know that the heat rose from the depths with Atlantic water masses, and slowed the winter ice growth. “Using the satellite data, we were able to show that the thin ice that we recorded in Fram Strait in July 2016 had previously passed through this unusually warm area off the Russian continental shelf,” says Belter. Furthermore, the ocean heat wave must have been so extreme that its effects on the growth in sea-ice thickness couldn’t be compensated for during its drift across the Arctic Ocean.

The two new studies highlight the importance of long-term datasets for sea-ice research in the Arctic. “If we are to understand the changes in the Arctic sea ice, long-term observations of ice thickness using satellites and aircraft are vital. Combined with modelling data they provide an overall picture that is sufficiently detailed to allow us to identify the key processes in the changing Arctic,” explains Jakob Belter.

The two studies have now been published on the following portals: