Novel molecular mechanism contributing to the pathogenesis of IPF: human microRNA-506-Quaking axis as a master switch 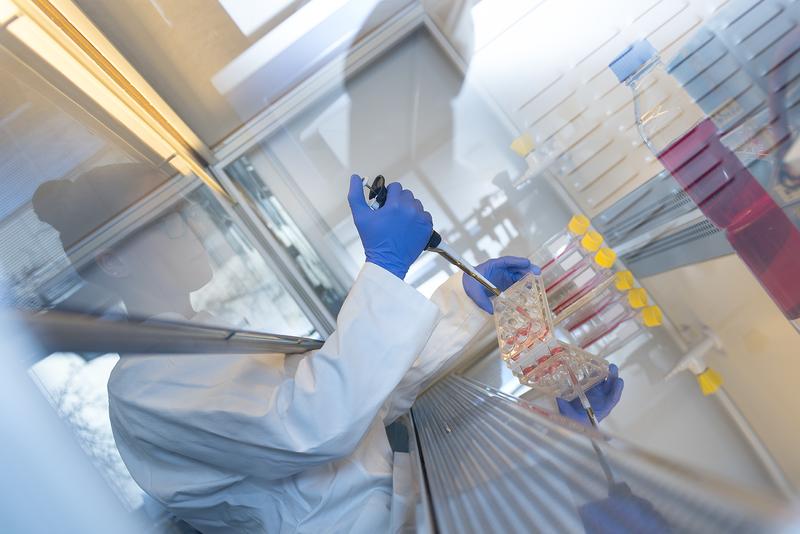 A team of scientists of the Fraunhofer ITEM, the Hannover Medical School and FAU Erlangen-Nürnberg has discovered a novel molecular regulatory axis that plays a decisive role in the pathogenesis of idiopathic pulmonary fibrosis (IPF). The focus is on the RNA-binding protein Quaking and its functional interplay with microRNAs. In-silico as well as in-vitro experiments in human lung fibroblasts revealed a novel regulatory microRNA-506-Quaking axis that contributes to IPF pathogenesis. The study has been published in Nature’s Scientific Reports. These findings open up new options for IPF therapies, for example based on RNA therapeutics or small molecules.

Idiopathic pulmonary fibrosis (IPF) is characterized by progressive remodeling of the lung tissue into connective tissue-like structures, due to a chronic inflammatory reaction and usually without an identifiable cause. Patients increasingly suffer from shortness of breath, initially only during exercise, but at a later stage also at rest. IPF is a disease with poor survival and limited therapeutic options. In their pursuit of novel, improved therapeutic strategies for IPF treatment and other fibrotic conditions, the team of researchers under Prof. Thomas Thum, Director of Fraunhofer ITEM and Head of the Institute for Molecular and Translational Therapy Strategies (IMTTS) at the Hannover Medical School (MHH), has been striving to elucidate novel mechanisms and molecular targets.

The researchers have focused on RNA-binding proteins in particular because, after binding to different forms of cellular RNAs, these proteins perform a variety of molecular regulations, including RNA splicing, processing, localization and translation. RNA-binding proteins are known to have a regulatory function in cardiac fibrosis and to act as critical orchestrators of detrimental tissue scarring and fibroblast activation in this context. The RNA-binding protein Quaking (QKI) is a particularly interesting target. The researchers found QKI expression to be significantly lower in IPF patients than in healthy individuals. QKI might be a therapeutic target in IPF – therapeutic restoration of QKI protein expression could be relevant to this objective. In their study, the team of researchers was able to demonstrate that QKI is regulated by microRNA-506 (miRNA-506). “We have been focusing on microRNAs for 15 years already in our cardiovascular research, where they act as regulators of Quaking protein expression. This finding can now also be applied to the lungs: We have identified microRNA-506 as regulator of Quaking,” said Prof. Thum.

Endogenous miRNAs are a class of highly conserved, short, non-coding RNAs that play a crucial role in the complex network of gene regulation. They regulate gene expression with a high degree of specificity at the posttranscriptional level, inhibiting protein expression by binding to specific target mRNA in the 3´ untranslated region. For IPF treatment, inhibition of relevant miRNAs that regulate QKI expression may thus be an elegant strategy to restore the loss of QKI protein expression. Prof. Thum and his team are currently investigating miRNA inhibitors in late-preclinical or clinical development for the treatment of cardiovascular diseases and intend to extend the therapeutic spectrum of promising candidates to include treatment of pulmonary fibrosis as well.

To explore the possibility of inhibiting miRNAs to restore QKI expression, the researchers collaborated with Dr. Meik Kunz of FAU Erlangen-Nürnberg, applying a practical in-silico screening approach using multi-sources data information and integrative molecular network bioinformatics. The generated network served as a basis to screen in silico for miRNAs and drug candidates that had the potential to act as a molecular off-switch for the QKI-interactome circuit. By performing in-vitro experiments modeling QKI interactions, e.g. in human lung fibroblasts, the researchers confirmed the accuracy of the computational predictions. In cooperation with Prof. Danny Jonigk of the Institute of Pathology of the MHH, the findings on QKI repression were confirmed in fibrotic human lung tissue. The aim now is to make use of these findings to develop new therapeutic approaches based on RNA therapeutics or low-molecular synthetic molecules, usually referred to as small molecules. For this purpose, the researchers will also use human precision-cut lung slices, which scientists at Fraunhofer ITEM have been using for preclinical studies for a long time.