Probing the Dynamics of Photoemission 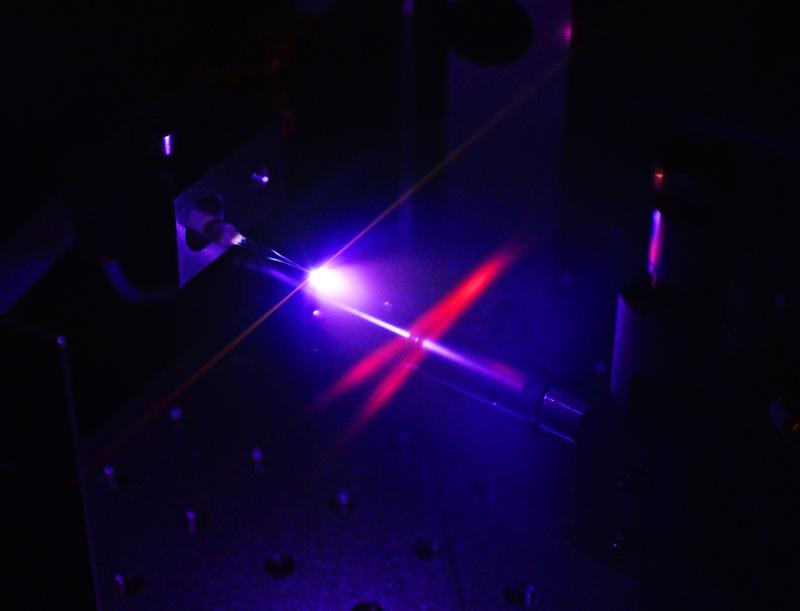 Physicists at the Max Planck Institute for Quantum Optics (MPQ) and Ludwig-Maximilian University in Munich (LMU) have used ultrashort laser pulses to probe the dynamics of photoelectron emission in tungsten crystals.

When light impinges on matter, the electrons in the sample respond to the input of energy, and the interaction gives rise to what is known as the photoelectric effect. Light quanta (photons) are absorbed by the material and excite the bound electrons. Depending on the wavelength of the light source, this can result in the ejection of electrons. The electronic band structure of the material involved has a significant effect on the timescales of photoemission. Physicists based at the Max Planck Institute for Quantum Optics (MPQ) and Ludwig-Maximilian University (LMU) in Munich have now measured the influence of the band structure of tungsten on the dynamics of photoelectron emission, and provide theoretical interpretations of their observations.

Almost a century ago, Albert Einstein received the Nobel Prize for Physics for his explanation of the photoelectric effect. Published in 1905, Einstein’s theory incorporated the idea that light is made up of particles called photons. Teams of physicists at the MPQ and LMU Munich have now taken a closer look at the phenomenon of photoemission. This is now possible thanks to the development and continuing refinement of attosecond technology. An ‘attosecond’ corresponds to 10-18 of a second, i.e. a billionth of a billionth of a second. The ability to reproducibly generate trains of pulses of laser light that last for a few hundred attoseconds enables researchers to follow the course of photoemission by ‘freezing the action’ at regular intervals – analogously to a stroboscope, but with far better temporal resolution.

In a series of photoelectron spectroscopy experiments, the team used attosecond pulses of extreme ultraviolet light to probe the dynamics of photoemission from a tungsten crystal. Each pulse contained a few hundred X-ray photons, each energetic enough to dislodge a photoelectron. With the aid of detectors mounted in front of the crystal, the team was able to characterize the ejected electrons in terms of their times of flight and angles of incidence.

The results revealed that electrons which interact with incoming photons take a little time to react to such encounters. This finding was made possible by the adoption of a new approach to the generation of attosecond pulses. Thanks to the introduction of a passive cavity resonator with an enhancement factor of 35, the new set-up can now produce attosecond pulses at a rate of 18.4 million per second, approximately 1000-fold higher than that previously common in comparable systems. Because the pulse repetition rate is so high, only very few photoelectrons per pulse are sufficient to provide a high average flux. “Since the negatively charged photoelectrons repel one another, their kinetic energies are subject to rapid change. In order to characterize their dynamics, it’s therefore important to distribute them over as many attosecond pulses as possible,” as joint first author Dr. Tobias Saule explains. The increased pulse rate means the particles have little opportunity to interact with each other because they are well distributed in time and space, so that the maximal energy resolution is largely retained. In this way, the team was able to show that, in terms of the kinetics of photoemission, electrons in neighboring energy states in the valence band (i.e. the outermost orbits of the atoms in the crystal), which have different angular momenta also differ by a few tens of attoseconds in the time they take to respond to incoming photons.

Notably, the arrangement of the atoms within the crystal itself has a measurable influence on the delay between the arrival of the light pulse and the ejection of photoelectrons. “A crystal is made up of multitudes of atoms, all of whose nuclei are positively charged. Each nucleus is the source of an electrical potential, which attracts the negatively charged electrons – in the same way as a round hole acts as a potential well for marbles,” says Dr. Stephan Heinrich, also joint first author of the report. “When an electron is dislodged from a crystal, what happens is a bit like the progress of a marble across a table that is pitted with depressions. These indentations represent the positions of the individual atoms in the crystal, and they are regularly organized. The trajectory of the marble is directly affected by their presence, and it differs from what would be observed on a smooth surface,” he points out. “We have now demonstrated how such a periodic potential within a crystal affects the temporal behavior of photoemission – ¬and we can theoretically account for it,” Stephan Heinrich explains. The delays observed can be attributed to the complex nature of electron transport from the interior to the surface of the crystal, and to the impact of the electron scattering and correlation effects that this entails.

“The insights provided by our study open up the possibility of experimental investigations of the complex interactions that take place in multi-electron systems in condensed matter on an attosecond timescale. This in turn will enable us to understand them theoretically,” says Prof. Ulf Kleineberg, who led the project.

In the longer term, the new findings could also lead to novel materials with electronic properties that enhance light-matter interactions, which would make solar cells more efficient, and improve switching rates of nano-optical components for ultrafast data processing and promote the development of nanosystems for use in the biomedical sciences.