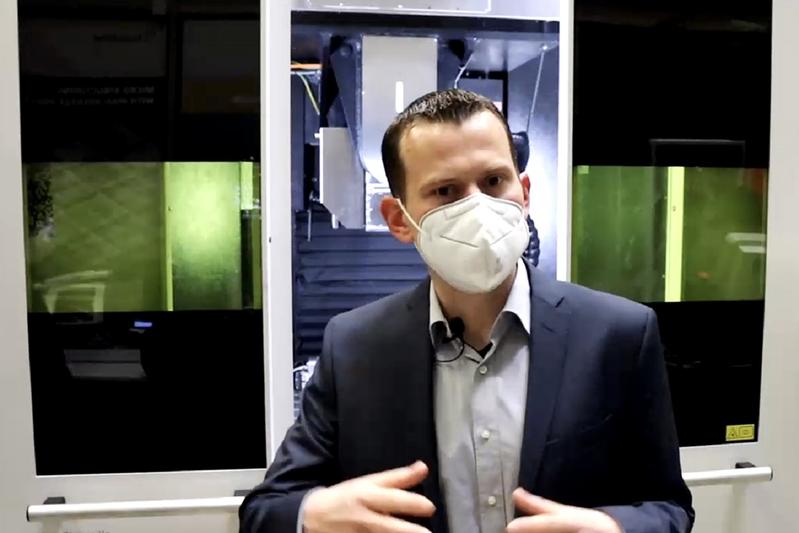 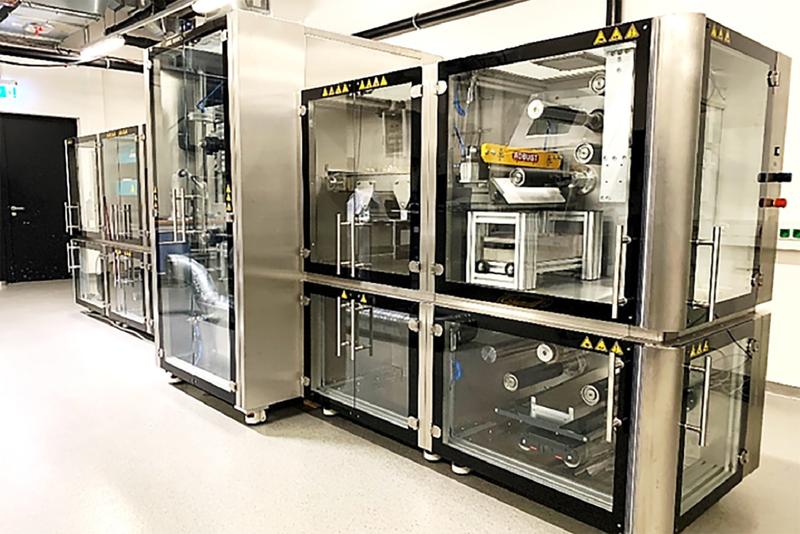 Starting in summer 2021, laser processes for battery production will be investi-gated at Fraunhofer ILT in a dedicated battery center. In the picture: a roll-to-roll plant. | Copyright: © Fraunhofer ILT, Aachen, Germany. | Download
❮ ❯

Ultrafast lasers have become a standard manufacturing tool for the display in-dustry, with even more and even larger applications coming in the next few years. The technology and processes needed for these new applications were presented at the 6th “UKP-Workshop: Ultrafast Laser Technology”, held by the Fraunhofer Institute for Laser Technology ILT in Aachen on April 21 and 22, 2021. Their spectrum ranged from ultra-powerful beam sources to processes that can be used to enlarge the surface of a metal electrode, for the generation of hydrogen, a thousand times.

Every two years since 2011, USP (ultra-short pulsed) laser experts have been meeting in Aachen to exchange ideas and discuss trends from industry and research in a personal atmosphere. This year, the networking event took place online. Fraunhofer ILT made a virtue out of necessity and used the opportunity for virtual laboratory tours, which were previously not feasible at a live event since so many participated in the past.

The core topics of the UKP-Workshop, so the German name, include developments in beam sources, process knowledge and potential applications. In the tenth year of this workshop series, there was again considerable progress to report in all these fields.

In the field of beam sources, the Fraunhofer-Gesellschaft is setting global standards with its Cluster of Excellence Advanced Photon Sources CAPS. The world record is held by a coherently coupled fiber laser at Fraunhofer IOF in Jena: 10 kW average power. At Fraunhofer ILT in Aachen, a 5 kW slab system will be ready for use this summer, as reported by Institute Director Prof. Constantin Häfner. A new feature here, the laser is pumped with six instead of two beams at each slab. In the end, 6 kW diode pumping power becomes 2 kW USP power per amplifier stage. Both in Jena and in Aachen, the beam sources are available to industrial partners and interested parties for trials in CAPS application laboratories.

On the question of when such power will become standard in the industry, Dr. Rudolf Weber of the University of Stuttgart presented an interesting statistic: The average pow-er of USP systems in both industry and research has doubled every three years over the last 20 years. According to these statistics, the introduction of multi-kW systems in standard industrial processes can be expected by 2025. It is already foreseeable that new laser processes with such kW sources for microstructuring surfaces will open up new markets.

The importance of the new laser beam sources for research can hardly be overestimat-ed, as Prof. Häfner explained in his outlook. As “secondary sources” for short-pulsed X-ray, electron or particle beams, they will open up completely new possibilities for medi-cine, particle physics or materials science.

Research has been looking at how USP laser radiation interacts with materials for at least 30 years, but it is only recently that reliable process windows have been developed for industrial applications. One expert in this field is Beat Neuenschwander from the Bern University of Applied Sciences, who again presented new results at this year's USP workshop. This time, he dealt with the processing of silicon and other semiconductor materials with single and multiple pulses (bursts). In the case of silicon, bursts can signif-icantly increase the ablation rate, whereby the number of pulses and the wavelength have different effects for different materials.

Detailed investigations of how bursts have an impact upon the ablation of metals were presented by Daniel Förster of Stuttgart-based LightPulse LASER PRECISION GmbH, as well as by Norman Hodgson of Coherent, Inc. In his presentation, Hodgson gave a crash course on process parameters for nine materials, three wavelengths, different pulse durations and burst frequencies. He was able to derive a tabulated “Wavelength selec-tion guide for ultrafast laser machining” from the various experiments.

Dr: Roswitha Giedl-Wagner from GFH GmbH discussed a particularly critical effect of X-ray emission in the use of industrial USP lasers. GFH builds laser machines for micro-material processing with ultrafast lasers for a wide range of applications. Accordingly, it measures emissions and adapts protection concepts accordingly since the current radia-tion protection ordinance often puts the feasibility of the simplest processes in question. Moreover, an elaborate approval procedure is still under development. The good news: A 1 mm steel housing already protects the user from the emitted radiation.

Not only beam sources, but also the optical systems of the USP lasers have proven to be a major driver of innovation in recent years. Georg König from the Chair of Optical Sys-tems Technology TOS at RWTH Aachen University summarized the progress of the past two years in his presentation. In addition to ever-improving multi-beam systems, he looked at how entire processes and new optics (diffractive optical elements, spatial light modulation, Bessel beams) can be simulated as well as how the associated technology can be put into practice.

More applications in the semiconductor sector

In addition to the discussion of process knowledge, the presentation of new applications is a core concern of the UKP-Workshop. Dr. Koji Sugioka from RIKEN in Japan gave a broad overview right at the beginning. On the process side, advances have been made in structuring, drilling and cutting (especially dicing), which in turn are spurring on com-mercial applications in the semiconductor and automotive industries. He also sees great prospects for hybrid processes, where the precision of USP lasers combined with the speed of other laser types enables higher productivity. For future uses of USP lasers, Sugioka sees as promising the nanostructuring of surfaces and the synthesis of new ma-terials such as nitrogen-void (NV) diamonds for quantum technology.

Applications in the semiconductor industry were presented by Dr. Kees Biesheuvel from ASM Laser Separation International. Important in this sector is the ablation of silicon wafers, where the USP laser works with micrometer precision and does not cause cracks. The systems are also indispensable for the precise ablation of coatings, a process that considerably simplifies subsequent separation processes. The systems are used both in semiconductor manufacturing and in the display industry.

Laser polishing represents a novel application area within USP technology. Astrid Saßmannshausen from Fraunhofer ILT presented the complete process chain for this. In this process, it is important to melt the surface and not to ablate it. With suitable process parameters, the surface roughness can be reduced over a broad spectrum in a two-stage process and a roughness of less than 0.1 µm can be achieved. New kW beam sources and bursts up to the GHz range will further improve productivity.

USP lasers for the energy of the future

Battery and hydrogen technologies make up a very large emerging sector in which USP lasers can be applied. In his presentation, Dr. Karsten Lange from Fraunhofer ILT showed both the environment and concrete examples of this. In hydrogen technology, there are several starting points. The most impressive is certainly the enlargement of the effective electrode surface by a factor of 1600 through laser structuring, which the scientist was able to achieve.

Battery technology today is all about increasing both energy density and power density and laser processes are being developed to advance both fields. At high power densities (i.e., fast charging or discharging processes), lithium separation is currently an issue. The USP laser can be used to introduce micropores into the electrodes of the batteries, thus mitigating the problem. The technology will be investigated at Fraunhofer ILT in a spe-cial battery laboratory starting in summer 2021. Crucial to the widespread introduction of USP lasers into battery and fuel-cell manufacturing will be the power scaling of the beam sources. For superior productivity, USP lasers with 5 to 10 kW are needed here.

USP lasers have caught on in the industry, but the current UKP-Workshop also showed how much process knowledge is still being developed to bring the full potential to man-ufacturing. “The ultimate goal would be a universal digital laser milling machine that could handle a wide range of machining tasks” is how workshop organizer Prof. Arnold Gillner summarized the vision.

High repetition rates, high power and how to get the power efficiently onto the work-piece – these are keywords that will certainly play a role at the next UKP-Workshop on April 26 and 27, 2023 in Aachen. “Then hopefully we will meet again in person,” co-organizer Martin Reininghaus concluded, expressing the wish of all participants.