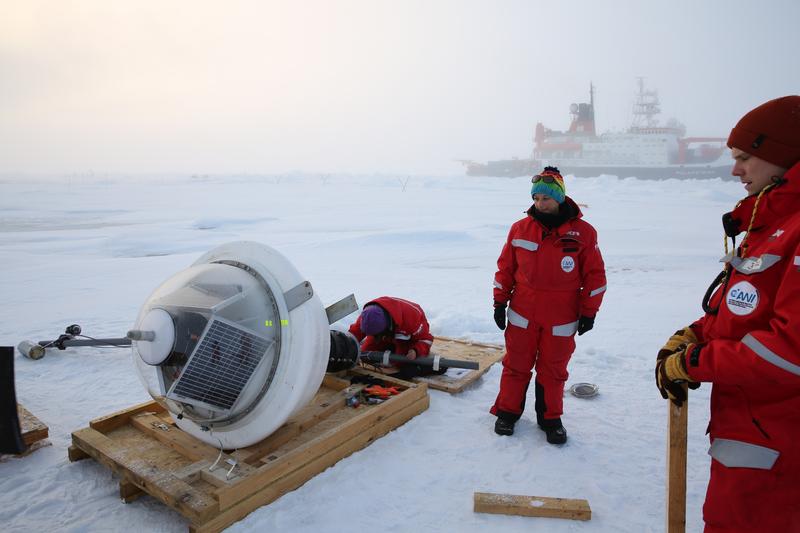 35 partners, led by the AWI, are developing a comprehensive environmental observing system for the Arctic as part of the Arctic PASSION project

The European Union will provide 15 million euros from the Horizon 2020 Programme to fund the Arctic PASSION project for the period 2021 to 2025. Under the leadership of the Alfred Wegener Institute, a consortium of 35 partners will promote the integration of international environmental observing systems for the Arctic and improve the tailoring of these systems to the needs of various user groups ranging from local inhabitants to academia through to industry and decision-makers.

Climate change is significantly changing the Arctic. “A coordinated and coherent international observation system for the Arctic would be of vital importance for the local and European population alike, as well as for research, politics and the economy. Such a system would make it possible to better monitor the most significant changes, improve forecasting, develop prevention and adaptation strategies, and support sustainable development,” says Dr Michael Karcher, describing the tasks the Arctic PASSION project will address. The Arctic researcher from the Alfred Wegener Institute, Helmholtz Centre for Polar and Marine Research (AWI), is leading the consortium of 35 European and international partners from 17 countries.

Although there have been advances in integrating Arctic observations in recent years, the various components of current Arctic observation systems remain fragmented, and the data are, in part, difficult to access and often not tailored to the needs of the users or stakeholders. Arctic PASSION aims to improve the situation by developing an integrated ‘pan-Arctic Observing System of Systems’ (pan-AOSS) via international collaboration. The project will address, among others, the following:

• Arctic PASSION will expand and better coordinate the Arctic Earth observation capacity and capabilities for the land, ocean, atmosphere, and cryosphere; this will be done through additional measurements and better integration at the international level. For example, the project will establish an international oceanic monitoring network in the Atlantic sector of the Arctic and connect it with a similar existing system in the Pacific sector.

• Measurements from observing programmes that reach back more than a few decades are scarce in the Arctic. Those that date back further, are based on observations by Indigenous communities and few national monitoring programs. To better understand local change, Arctic PASSION will compile those and analyse them jointly with our Indigenous partners.

• To better adapt the observing system to the needs of the people living in the Arctic, Arctic PASSION will extend it by including Indigenous and local knowledge. For example, through a series of panel meetings with local and Indigenous communities, scientists, and political and commercial actors, it will define which data are needed and in what form, with the goal to have them routinely collected.

• Together with local people, from Indigenous communities and Arctic cities alike, as well as local and national decision-makers, Arctic PASSION will combine data from the European and international Earth observation programmes to provide eight new information services. Concrete examples include a forecasting system for air pollution; integrated fire protection management in the Arctic; and improved permafrost monitoring.

• The interoperability and accessibility of application-ready Arctic environmental data for science, policy and business will be improved to better address climate change challenges and sustainable development requirements. Lastly, a quantification of the observation system’s financial and non-financial societal benefits will help to secure international support for its long-term funding.

“We’re convinced that, by collaborating internationally, the Arctic PASSION team will make significant advances towards establishing a more integrated environmental observation system in the Arctic that will be of use to the community at large,” summarises Karcher, the project’s coordinator. The Arctic PASSION project will officially start on 1 July. The name stands for ‘Pan-Arctic observing System of Systems: Implementing Observations for societal Needs’.

You can find printable images in the online version of this press release at: https://www.awi.de/en/about-us/service/press.html