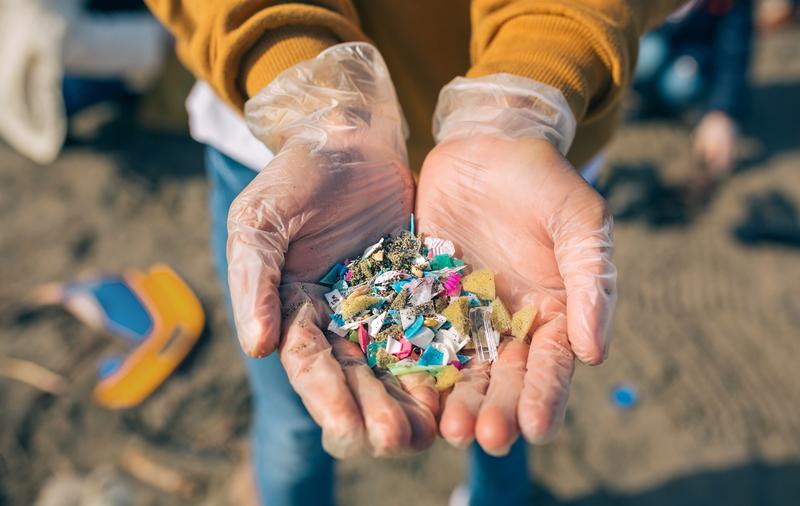 They are smaller than five millimeters and are almost everywhere: In the river Weser, in the Wadden Sea, in the North Sea. The pollution of waters with microplastic particles is a major environmental problem. The microplastics are deposited in the sediment, marine life ingests them and, through the food chain, so do humans. How widespread are these particles actually in our marine environment? And how toxic are they? These are some of the questions that scientists at Jacobs University Bremen are currently researching – across different disciplines.

The microbiologist Lisa Roscher is focusing in her PhD thesis on the distribution and identification of microplastics in the Weser estuary, the Weser and Fulda rivers. Among other things, the young scientist is investigating whether the effluents from two wastewater treatment plants on the rivers are sources of pollution with microplastic particles. Her work is part of an initiative of the German Federal Ministry of Education and Research called "PLAWES". For the first time worldwide, the microplastic pollution of a large river basin, the model system Weser – National Park Wadden Sea, is being comprehensively investigated.

Regional processes have a decisive influence on the concentration of microplastics. This is the position of Claudia Lorenz in her PhD thesis. She researched the spatial distribution of microplastics of different types and sizes in both sediment and surface water of the southern North Sea. One of the hotspots in the surface water is the Rhine-Meuse delta, while the highest concentration in the sediment was found in a more central area of the southern North Sea. The composition of the different microplastic types differed significantly between sediment and surface water, but a common characteristic was that the majority of the microplastics was very small, less than 0.1 millimeters.

Although the pollution of the North Sea with microplastics has been known for some time, reliable data on their distribution is often still lacking. Fangzhu Wu wants to close this gap with her PhD thesis. Her research focuses on the spatio-temporal occurrence of microplastic, on hotspots and possible microplastic sources and sinks in the North Sea. All three PhD students, Fangzhu Wu, Lisa Roscher and Claudia Lorenz, belong to the research group of Matthias Ullrich, Professor of Microbiology at Jacobs University. They conduct their PhD projects at the Biological Research Station Helgoland of the Alfred Wegner Institute for Polar and Marine Research, where Gunnar Gerdts and his research team host and supervise the PhD students.

But how toxic are microplastic particles actually? Patrice Donfack, postdoctoral fellow in the research group of Arnulf Materny, Professor of Chemical Physics at Jacobs University, wants to develop a method for the rapid analysis of the smallest particles and their properties. Algae and bacteria accumulate on their surfaces. This biofilm could potentially lead to faster degradation of the plastic, but also binds potentially toxic substances. With the help of the Raman spectroscopy, the working group wants to create an analysis system that will allow authorities, for example, to detect the contamination more quickly. The research is conducted in close collaboration with other research groups and industry partners.

Agostino Merico, Professor of Ecological Modeling at Jacobs University Bremen, has investigated whether floating garbage chutes such as the "Ocean Cleanup" project can deliver a sustainable contribution to cleaning the oceans of plastic waste. Given the huge quantities that end up in the oceans every day, their contribution is rather small and possibly even counterproductive, he concluded, because they might give the impression that there is a simple solution. But, there can only be one answer to the waste problem, Professor Merico said: "We need to stop producing plastics and promote alternative, more sustainable solutions like using biodegradable materials."