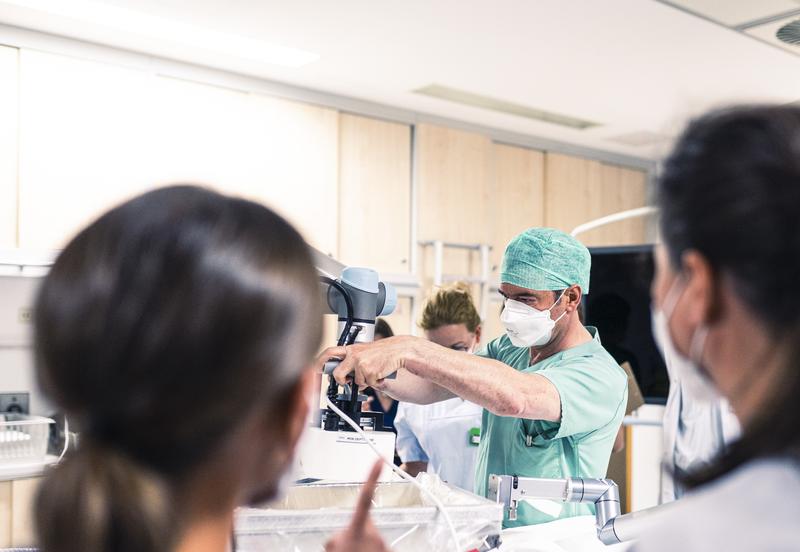 In the Magdeburg University Clinic for Radiology, the first patient in Europe has been treated with a new type of liver tumor therapy as a part of a clinical study.

Histotripsy is the name of the innovative new procedure from the US, which has now been tested on a patient at the University Hospital for Radiology and Nuclear Medicine Magdeburg as part of the so-called #HOPE4LIVER study. This makes Magdeburg University Hospital the first site in all of Europe to treat a patient with liver tumors within this Phase I clinical trial. Previously, in the US, the first patient was enrolled in this pivotal trial, in which initially only a few patients were participating. In the first step, the aim is to investigate the safety and efficacy of the novel histotripsy method. This is a form of focused ultrasound that mechanically destroys primary and metastatic liver tumors without the need for skin incisions or needles placed in the patient's body.

Clinic director Prof. Maciej Pech, MD, performed the novel procedure in Magdeburg. Histotripsy uses the power of induced microbubbles in the cell to destroy the target tissue, which avoids the ionizing energy of radiation, heat damage from thermal modalities and incisions or needles from traditional interventional treatments. The radiologist said after the treatment, "Our first treatment in the #HOPE4LIVER trial was successful in destroying the targeted tumor and the patient was doing well both during and after the treatment. We will continue to treat the patient and look forward to enrolling additional patients for whom histotripsy therapy is appropriate. The ability to destroy tumors non-invasively with histotripsy could be a huge advantage for many patients, as it is very gentle to use, which would make outpatient therapy possible."

Only 20 to 30 percent of patients with multiple liver tumors are primary candidates for surgical resection when anatomic limitations, poor underlying liver function, or general health problems limit the success of surgery. Histotripsy has the potential to be able to offer these patients advantages in prolonged treatment due to its non-invasive, non-thermal and non-ionizing tumor destruction.

In addition to the University Medical Center Magdeburg, Braunschweig is also among the other study sites in Germany. The Company intends to establish up to seven study sites in selected European countries. Each site will be led by experienced clinical investigators and multidisciplinary liver specialists. Patients eligible for the European #HOPE4LIVER study will undergo non-invasive histotripsy to destroy up to three primary or metastatic liver tumors in a single session. If the #HOPE4LIVER trials are successful, both in the U.S. and Europe, the company plans to seek regulatory approval for the technology. In the long term, the company said it is also considering expanding its use to other organs to be treated.