Flash mob in the nucleus 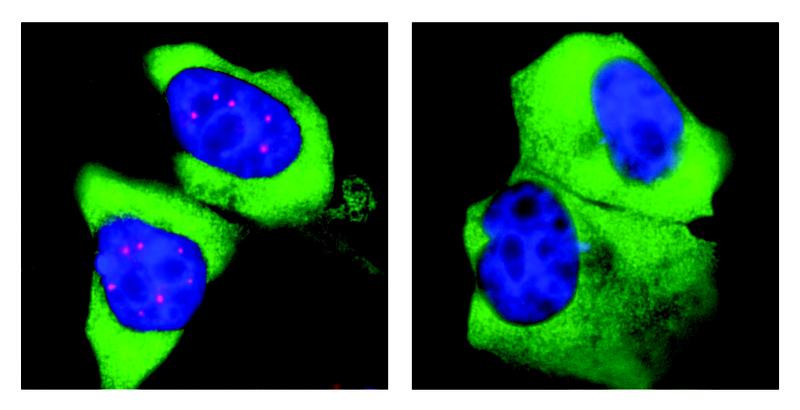 SMN is concentrated in the Cajal bodies (left, red) in the nucleus of human cells (blue). If phosphorylation of SMN is inhibited, the concentration ceases and Cajal bodies disappear. | Quelle: AG Gruss | Copyright: © AG Gruss / University of Bonn | Download

The nucleus is much more than a storage compartment for chromosomes: It also contains the complex machinery that produces transcripts of the genes that are currently needed and releases them into the cell body. Some of the proteins involved herein are not evenly distributed in the nucleus, but cluster at specific sites. A study by the universities of Würzburg, Heidelberg and Bonn with the help of Evotec SE at the Martinsried site now shows how these "flash mobs" are regulated. In the long term, the results could also yield new therapeutic approaches for spinal muscular atrophy. They are published in the journal Cell Reports.

Almost all cells in our body contain a nucleus: a somewhat spherical structure that is separated from the rest of the cell by a membrane. Each nucleus contains all the genetic information of the human being. So it serves as a kind of library - but one with strict requirements: If the cell needs the building instructions for a protein, it won’t simply borrow the original information. Instead, a transcript of it is made in the nucleus.

The machinery required for this is very complex, not least because the transcripts are not simple copies. In addition to essential information, genes also contain numerous passages of meaningless "garbage". They are removed when the transcript is made. Biologists call this editorial revision "splicing".

"An important role in splicing is played by the SMN complex, a 'molecular machine' consisting of nine different proteins," explains Prof. Dr. Oliver Gruss from the Institute of Genetics at the University of Bonn, who is also a member of the university's transdisciplinary research area "Life and Health". "Interestingly, these machines are not evenly distributed in the nucleus. Instead, they accumulate at specific sites called Cajal bodies." However, there are no transport mechanisms in the cell nucleus that bring the SMN complexes to Cajal bodies. Instead, the SMN proteins themselves have certain properties that are responsible for their aggregation. Which ones these are, was unclear until now.

SMN complexes have a prominent feature: They carry an unusually large number of phosphate groups, which are small molecular residues with a phosphorus atom in the center. "We suspected that this phosphorylation promotes their mass clustering into Cajal bodies," explains Dr. Maximilian Schilling from the research group around Oliver Gruss.

Phosphate groups are not part of the actual blueprint of a protein - they are added later and can also be removed again. This is often how the cell regulates the activity of the respective protein. The phosphate group is attached in this process by certain enzymes, the kinases. "We have now inhibited each of the hundreds of human kinases individually and looked at how that affects the formation of Cajal bodies," Schilling says.

In this way, they encountered a network of kinases, which, when inhibited, caused the Cajal bodies to largely disappear. Further analyses showed that in the absence of these kinases, phosphorylation of SMN complexes at specific sites decreased sharply. This then causes the flash mobs in the nucleus to cease - the Cajal bodies disintegrate. The finding is particularly interesting because the kinases identified not only regulate splicing, but also the translation of the gene transcripts edited in this way into proteins. These are therefore enzymes that are crucial for various steps in this vital process.

The SMN complex is known to human geneticists not only for its role in splicing: Individual mutations in its blueprint result in a serious disease, spinal muscular atrophy, in those affected. One in about 6,000 newborns is born with this genetic defect. Treatment is extremely expensive; the cost per patient runs into millions. "Some of the gene defects that cause spinal muscular atrophy are near the phosphorylation sites of the SMN complex," explains Gruss. "Affected individuals may therefore have impaired attachment of phosphate groups to these sites, and consequently also impaired formation of Cajal bodies. We suspect that this causes splicing to be impaired, which subsequently results in the disease symptoms."

The kinases identified may therefore also be suitable as a starting point for new therapies. Preliminary results from mouse model cells for human spinal muscular atrophy show that agents that increase kinase activity also improve Cajal body formation. "It is completely unclear whether these agents also ameliorate pathological changes in a complex organism," cautions Gruss against inflated expectations. "That new treatment options will eventually emerge from this is therefore still speculation at this stage."

Participating institutions and funding:
The universities of Bonn, Würzburg and Heidelberg were involved in the study. It was funded by the German Research Foundation (DFG) and the US-American CURE SMA Foundation.