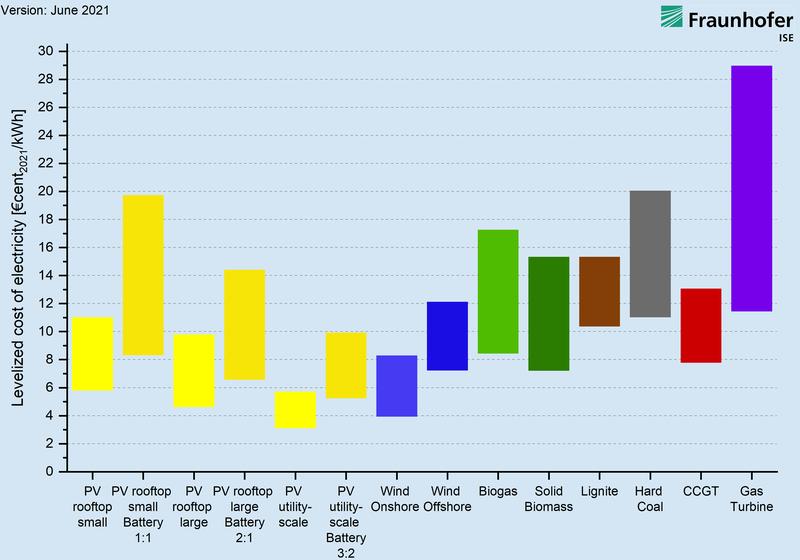 LCOE of renewable energy technologies and conventional power plants at locations in Germany in 2021. Specific plant costs are considered using a minimum and a maximum value for each technology. | Copyright: Fraunhofer ISE | Download 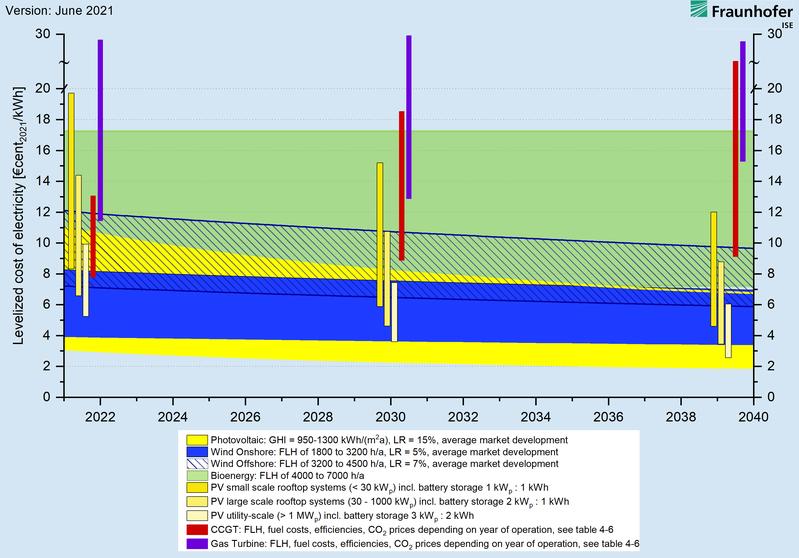 Researchers at the Fraunhofer Institute for Solar Energy Systems ISE have presented the newest edition of their study on the levelized cost of electricity (LCOE) of renewable power plants. The fifth edition of the study analyzes the current costs and forecasts the future cost development up to 2040 based on technology-specific learning rates and market scenarios. "Wind and solar power plants in Germany have significantly lower LCOE costs than conventional power plants. Due to the rising price of CO2 certificates, the cost competitiveness of even existing coal and gas-fired plants will further decrease in the coming years," says project head Dr. Christoph Kost.

Due to the intensified actions taken to protect the climate, the operating costs of conventional power plants are rising. At the same time, the levelized costs of electricity, particularly for photovoltaic plants, have continued to fall since the results of the last study were released in 2018. Currently, the LCOE of photovoltaics ranges from 3.12 to 11.01 €Cent /kWh, depending on the type of plant and the solar irradiation, and the specific plant costs range from 530 to 1600 €/kWp, depending on the plant type.

Photovoltaic systems with battery storage are a growing market in the German energy system and therefore were included in the study for the first time. Today the LCOE of hybrid PV-battery systems ranges from 5.24 to 19.72 €Cent /kWh. This wide cost range is due to the large price difference of the various battery systems. Battery storage provides additional value by contributing to security of supply as well as by stabilizing the feed-in curves, or battery discharge, during times of high energy demand.

In the case of wind power, the LCOE of onshore wind turbines ranges between 3.94 and 8.29 €Cent /kWh, making them the second cheapest technology for electricity generation today. This decrease is due to falling plant costs. Offshore wind turbines are significantly more expensive at 7.23 to 12.13 €Cent /kWh, despite the higher annual mean full load hours (FLH) of up to 4500 hours per year. The energy generation costs of offshore wind are higher because of the more costly installation, operating and financing (3000 to 4000 €/kW). The forecasts show that new conventional power plants built in Germany will not achieve an LCOE below 7.5 €Cent /kWh, taking the higher CO2 prices into account.

Forecast of the Levelized Cost of Electricity (LCOE) up to 2040

With further technological advances, the LCOE of PV systems, including roof-mounted, and of wind turbines in windy locations will be significantly lower than the average LCOE of all fossil fuel power plants by 2040.

Forecasts show that in 2040, the LCOE will be between 3.58 and 6.77 €Cent/kWh for small rooftop systems and between 1.92 and
3.51 €Cent/kWh for ground-mounted PV systems. As of 2024, the LCOE is expected to be below 10 €Cent/kWh for all PV systems (excluding the battery storage). By 2040, the system costs are expected to fall below 350 €/kW for ground-mounted PV and range from 615 to 985 €/kW for small-scale PV.
In 2030, the cost of electricity generation from a PV-battery system is projected to be cheaper than a combined cycle power plant. In 2040, even small PV-battery systems are expected to achieve an LCOE between 5 and 12 €Cent/kWh.