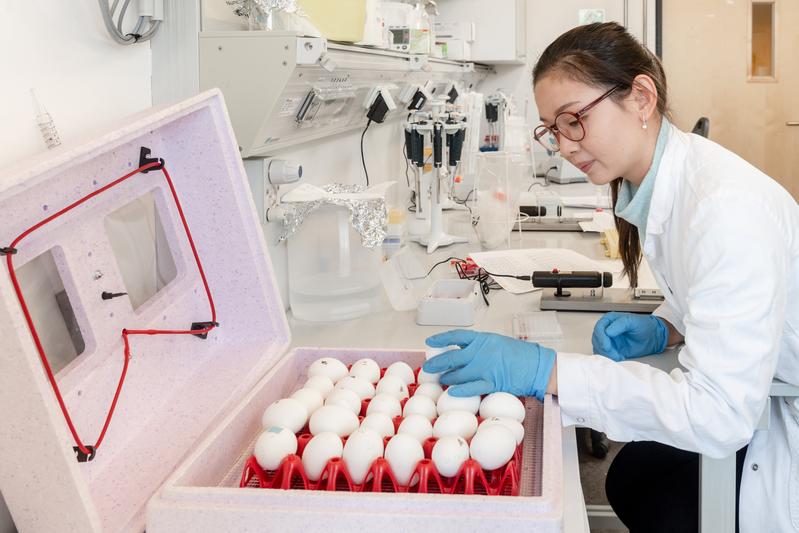 Why are some animals more susceptible to diseases than others? Scientists at the Technical University of Munich (TUM) investigated this in more detail. They found genetic differences in livestock species that make individual animals less susceptible to certain diseases. In a large study, the researchers demonstrated the feasibility and efficiency of CRISPR-Cas9 editions.

The possibilities of genome editing in livestock breeding have not yet been systematically explored. The FORTiGe research association funded by the Bavarian Research Foundation now wanted to clarify how the molecular biological methods of genome analysis and genome editing can improve animal health. The researchers used genome-wide investigations and the CRISPR-Cas9 gene scissors for this purpose. With the help of the CRISPR-Cas9 method, DNA building blocks in the genome can be rewritten in a targeted manner.

The researchers exclusively targeted genetic changes that might also occur in nature. Such changes might also be achieved in the context of classical animal breeding, but this can take many generations and decades, whereas genome editing leads to the goal in a few generations.

Genomic methods to ensure the health of young animals

In cattle, the scientists identified genes that significantly influence the birth process, the health of young animals and the resistance of the metabolism of cows. “Some of the identified genome sites can be used in the future to improve animal health,” explains Ruedi Fries, Professor of Animal Breeding at TUM and Spokesman of the association.

The working group of Angelika Schnieke, Professor of Livestock Biotechnology at TUM, found a way to produce pigs that are resistant to edema disease by means of genome editing. This infectious disease mainly affects newly weaned piglets, i.e. weaned from the mother’s milk, the intestinal environment of which has become out of balance due to the diet change. In susceptible animals, pathogenic Escherichia coli germs can multiply greatly and lead to the death of piglets due to toxins – a reason why antibiotics are often used here so far.

In addition, genome-edited chickens have been bred which are resistant to the avian leukosis virus. The animals were produced by the group of Benjamin Schusser, Professor of Reproductive Biotechnology. Resistance was confirmed by extensive immunological investigations and infection experiments both in cell cultures and in live animals.

“The avian leukosis virus can lead to severe diseases and severe growth and laying depression in poultry,” explains Prof. Schusser. “Research might now build up herds of animals that do not get sick because they are resistant to these viruses.”

Genetically modified animals as a perspective for agriculture

“In all studies, we used genetic changes as they might occur naturally,” emphasizes Prof. Fries. For example, the gene variant leading to resistance to the edema disease, is found in certain pig breeds, but it is only rarely found in Bavarian breeding animals. The variant of a certain protein leading to resistance to the avian leukosis virus does not occur in chickens, but is found, for example, in quails.

“The research results open up realistic perspectives for supporting farmers in their efforts to improve animal health and welfare,” summarizes Prof. Fries.

The joint project also looked at the social and legal framework conditions.

In a social science analysis, the working group of Ruth Müller, Professor of Science and Technology Policy at the Munich Center for Technology in Society at TUM, investigated the possibilities and perceptions of genome editing applications in animals in a regional, rural context. In an exploratory study, interviews with farmers, focus groups with representatives of the general public and a workshop with scientists and breeders were conducted. The integration of a social science component into the research association also allows the exploration of social possibilities for genome editing applications in animal breeding in Bavaria. The study shows that the safety of genetic technology is no longer the focus for both farmers and the general public when they discuss whether and how genome editing might be used in animal breeding. Rather, the focus is on how agriculture should look in the future and the role that new technologies might play in strengthening local, ecological and animal-friendly agriculture in small and medium-sized enterprises. The general public is opposed to the use of genome editing in factory farming settings.

The accompanying legal research started off with the ECJ ruling of July 25, 2018, according to which genome-edited organisms are to be categorized as “genetically modified organisms” (GMOs) within the meaning of Directive 2001/18/EC. The implementation of scientific research results into agricultural practice as regards genome-edited animals is hardly realistic under the current GMO legislation, though. Prof. Hans-Georg Dederer (University of Passau) therefore proposes amendments to both Directive 2001/18/EC and Directive 2009/41/EC. The purpose of the amendments drawn up is to exclude genome-edited animals from the scope of application of GMO law insofar as the genetic modifications brought about by means of genome editing techniques could occur naturally or by means of classical animal breeding as well.

The FORTiGe research association with scientific participation of TUM, the Ludwig Maximilian University of Munich (LMU, Prof. Eckhard Wolf, Chair of Molecular Animal Breeding and Biotechnology) and the University of Passau (Prof. Hans-Georg Dederer, Chair of Constitutional and Administrative Law, Public International Law, European and International Economic Law) and with the participation of industry was funded by the Bavarian Research Foundation. (https://forschungsstiftung.de/Projekte/Details/FORTiGe-Forschungsverbund-Tiergesundheit-durch-Genomik.html)