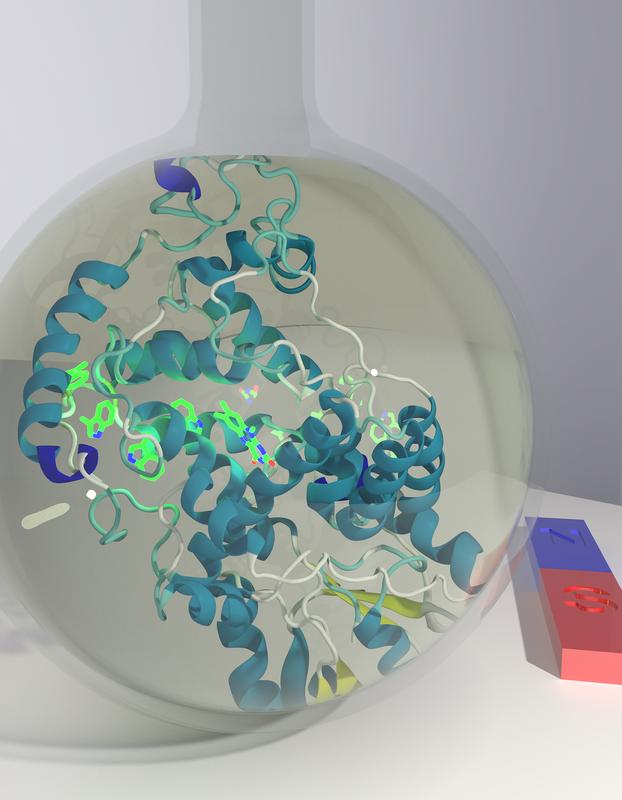 In Oldenburg, the light-sensitive protein cryptochrome 4 was produced in the laboratory for the first time. Crucial for the magnetic properties of the molecule are four amino acids (light green) in which so-called radical pairs can form. | Copyright: Ilia Solov'yov

New findings on magnetic sensing in birds are presented by an international team of researchers led by the Universities of Oldenburg and Oxford. The results are published in the journal Nature.

Humans perceive the world around them with five senses – vision, hearing, taste, smell and touch. Many other animals are also able to sense the Earth’s magnetic field. For some time, a collaboration of biologists, chemists and physicists centred at the Universities of Oldenburg (Germany) and Oxford (UK) have been gathering evidence suggesting that the magnetic sense of migratory birds such as European robins is based on a specific light-sensitive protein in the eye. In the current edition of the journal Nature, this team demonstrate that the protein cryptochrome 4, found in birds’ retinas, is sensitive to magnetic fields and could well be the long-sought magnetic sensor.

First author Jingjing Xu, a doctoral student in Henrik Mouritsen's research group in Oldenburg, took a decisive step toward this success. After extracting the genetic code for the potentially magnetically sensitive cryptochrome 4 in night-migratory European robins, she was able, for the first time, to produce this photoactive molecule in large quantities using bacterial cell cultures. Christiane Timmel’s and Stuart Mackenzie’s groups in Oxford then used a wide range of magnetic resonance and novel optical spectroscopy techniques to study the protein and demonstrate its pronounced sensitivity to magnetic fields.

The team also deciphered the mechanism by which this sensitivity arises – another important advance. "Electrons that can move within the molecule after blue-light activation play a crucial role", explains Mouritsen. Proteins like cryptochrome consist of chains of amino acids: robin cryptochrome 4 has 527 of them. Oxford’s Peter Hore and Oldenburg physicist Ilia Solov'yov performed quantum mechanical calculations supporting the idea that four of the 527 – known as tryptophans – are essential for the magnetic properties of the molecule. According to their calculations, electrons hop from one tryptophan to the next generating so-called radical pairs which are magnetically sensitive. To prove this experimentally, the team from Oldenburg produced slightly modified versions of the robin cryptochrome, in which each of the tryptophans in turn was replaced by a different amino acid to block the movement of electrons.

Using these modified proteins, the Oxford chemistry groups were able to demonstrate experimentally that electrons move within the cryptochrome as predicted in the calculations – and that the generated radical pairs are essential to explain the observed magnetic field effects. The Oldenburg team also expressed cryptochrome 4 from chickens and pigeons. When studied in Oxford, the proteins of these species, which do not migrate, exhibit similar photochemistry to that of the migratory robin, but appear markedly less magnetically sensitive.

"We think these results are very important because they show for the first time that a molecule from the visual apparatus of a migratory bird is sensitive to magnetic fields" says Mouritsen. But, he adds, this is not definitive proof that cryptochrome 4 is the magnetic sensor the team is looking for. In all experiments, the researchers examined isolated proteins in the laboratory. The magnetic fields used were also stronger than the Earth's magnetic field. "It therefore still needs to be shown that this is happening in the eyes of birds" Mouritsen stresses. Such studies are not yet technically possible.

However, the authors think the proteins involved could be significantly more sensitive in their native environment. In cells in the retina, the proteins are probably fixed and aligned, increasing their sensitivity to the direction of the magnetic field. Moreover, they are also likely to be associated with other proteins that could amplify the sensory signals. The team is currently searching for these as yet unknown interaction partners.

Hore says “if we can prove that cryptochrome 4 is the magnetic sensor we will have demonstrated a fundamentally quantum mechanism that makes animals sensitive to environmental stimuli a million times weaker than previously thought possible”.

The cooperation between Oldenburg and Oxford is funded by a 6-year Synergy Grant from the European Research Council (ERC) with the title ‘QuantumBirds’. The collaboration is also a key part of the Collaborative Research Center, ‘Magnetoreception and Navigation in Vertebrates’ (SFB 1372) funded by the German Research Foundation (DFG), and Ilia Solov’yov is a Lichtenberg Professor funded by the VolkswagenStiftung.