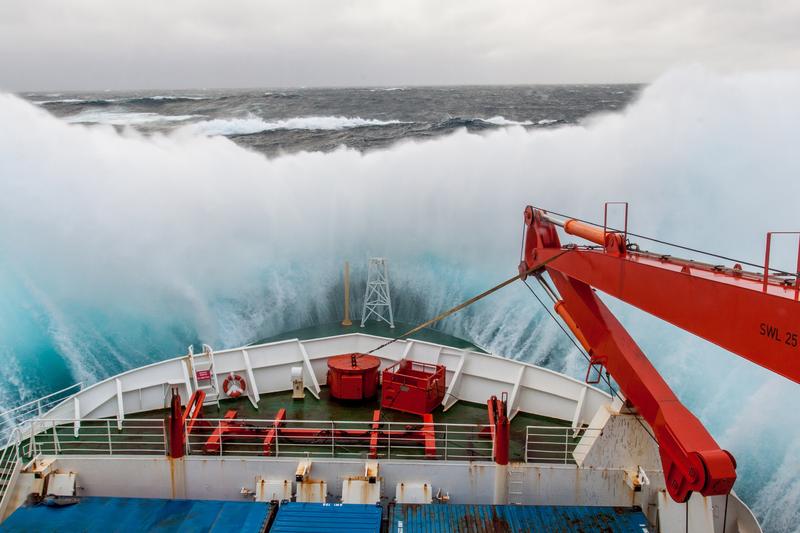 In future the intensity of the Antarctic Circumpolar Current could increase, accelerating climate change

Our planet’s strongest ocean current, which circulates around Antarctica, plays a major role in determining the transport of heat, salt and nutrients in the ocean. An international research team led by the Alfred Wegener Institute has now evaluated sediment samples from the Drake Passage. Their findings: during the last interglacial period, the water flowed more rapidly than it does today. This could be a blueprint for the future and have global consequences. For example, the Southern Ocean’s capacity to absorb CO2 could decrease, which would in turn intensify climate change. The study has now been published in the journal Nature Communications.

The Antarctic Circumpolar Current (ACC) is the world’s strongest ocean current. Since there are no landmasses blocking its way, the West Wind Drift drives the water unhindered eastwards around the Antarctic in a clockwise direction. As a result, a gigantic ring-shaped current forms, linking together the Pacific, Atlantic and Indian Oceans in the south. The ACC is the central distribution point in global ocean circulation – also known as the ‘global conveyor belt’ – and as such influences oceanic heat transport and marine material cycles around the planet. Major changes in the ACC therefore have global consequences.

“Although the ACC plays an important role in tomorrow’s climate, our understanding of its behaviour is still extremely limited,” says Dr Shuzhuang Wu, a researcher at the Marine Geosciences Section of the Alfred Wegener Institute, Helmholtz Centre for Polar and Marine Research (AWI) and first author of the study released in Nature Communications. “In order to remove the related uncertainties in the climate models and to improve future forecasts, we urgently need paleo-data, which we can use to reconstruct the conditions and behaviour of the ACC in the past.”

The only constriction on the ACC’s circular route is the Drake Passage between the southern tip of South America and the Northern tip of the Antarctic Peninsula. Here, no less than 150 million cubic metres of ocean water per second force their way through the Passage – more than 150 times the amount of water flowing in all of Earth’s rivers. This bottleneck is an ideal place to observe changes in the overall current. Accordingly, in 2016, AWI researchers travelled to the Drake Passage on board the research icebreaker Polarstern to investigate the sediment deposits from past millennia. “The bottom current here is so strong that in many places the sediment is simply washed away,” explains the leader of the expedition and co-author of the study, Dr Frank Lamy. “Nevertheless, using the Polarstern’s sediment echo sounder, we were able to detect the pockets of sediment and collect samples, including a core from a depth of 3,100 meters, measuring more than 14 metres in length. This was a significant achievement, since the last comparable cores from the Drake Passage dated back to the 1960s.”

By analysing the particle size in the deposited sediments, the research team was able to reconstruct the flow speed and the volume of water transported by the ACC in the Drake Passage. Based on the high percentage of small particles at the height of the last glacial period, the researchers calculated that the speed was slower compared to today, and there was a significantly smaller volume of water. This was due to the weaker westerlies and the more extensive sea ice in the Passage. This means that during the glacial period, the ACC’s main driver blew more weakly, and the area of exposed water was smaller. In contrast, the extremely large particles at the height of the interglacial period indicated a high flow speed and a flow rate 10-15 percent higher than today.

“At the height of the last interglacial period from 115,000 to 130,000 years before today, the global temperature was on average 1.5° to 2° C warmer than it is today. Accordingly, the Circumpolar Current could accelerate as global warming progresses,” says Lamy. “That would have far-reaching effects on the climate. On the one hand, the ACC shapes other ocean currents like the Gulf Stream, which in turn plays a role in determining the weather in Northwest Europe. On the other, the oceans absorb roughly a third of the surplus CO2 from the atmosphere. However, a more rapid ACC would promote the transport of CO2-rich deep water to the surface. Accordingly, the ocean’s capacity to absorb atmospheric CO2 could decline significantly, and the concentration in the air could rise more quickly. In the long term, large parts of the Southern Ocean could even become sources of CO2.“