Battle of the Pleiades against plant immunity 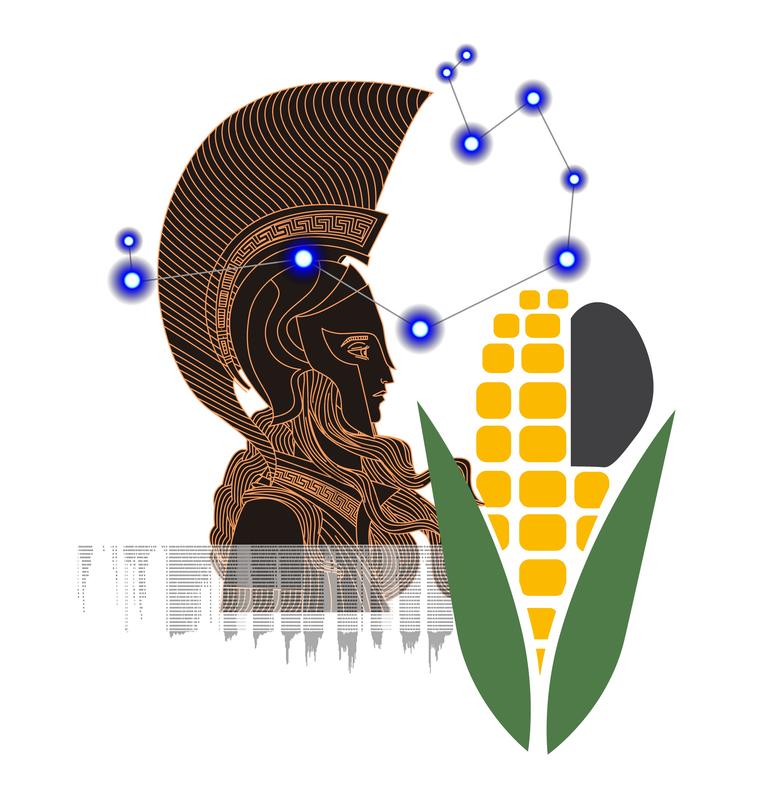 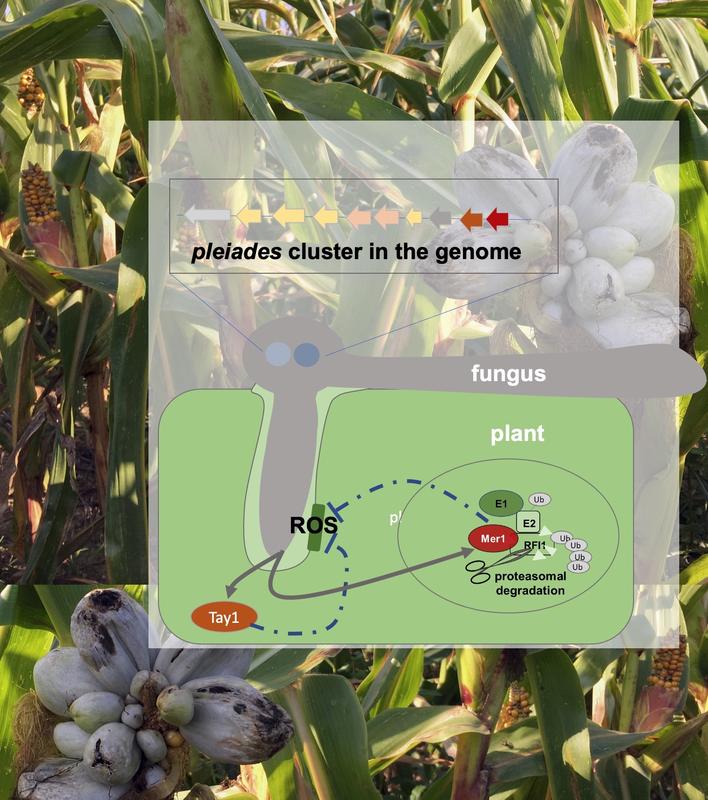 Mythological nymphs reincarnate as a group of corn smut proteins to launch a battle on maize immunity. One of these proteins appears to stand out among its sister Pleiades, much like its namesake character in Greek mythology. The research carried out at GMI – Gregor Mendel Institute of Molecular Plant Biology of the Austrian Academy of Sciences – is published in the journal PLOS Pathogens.

Pathogenic organisms exist under various forms and use diverse strategies to survive and multiply at the expense of their hosts. Some of these pathogens are termed “biotrophic”, as they are parasites that maintain their hosts alive. These biotrophic pathogens deregulate physiological processes in their hosts by suppressing their immune defenses and favoring disease development. In plant biotrophic pathogens, such hostile actions are inflicted by secreted molecules including proteins, termed “effectors”. One biotrophic pathogen infecting maize plants is Ustilago maydis, or corn smut. Up until present, the arsenal used by the U. maydis effector proteins to wage war against the maize immune response remained largely unstudied. Now, researchers around University of Bonn professor and previous GMI group leader Armin Djamei unveil the function of the Pleiades, a heterogeneous group of effector proteins in corn smut, and tell a tale worthy of Greek mythologies.
The Pleiades: Between mythology, stars and maize immunity
Whether the star cluster in the Taurus constellation was named after the seven daughters of Atlas and Pleione, or whether the opposite is true, is still subject to debate. However, what brings the name “Pleiades” on a group of effector proteins in corn smut? In fact, the genes encoding the Pleiades are arranged as a co-regulated cluster in the U. maydis genome, hence the analogy with the star cluster. Furthermore, the genetic cluster in question is particularly dynamic. This phenomenon is partly due to the high prevalence of transposon sequences, or “jumping genes”. As a result, the high sequence diversity in the Pleiades’ genetic cluster produces effector proteins that lack conserved domains. Therefore, a sequence-based prediction of the Pleiades’ functions is simply not possible. In this sense, the forces at play in the battle against maize immunity were still awaiting close examination.

Different tactics leading to the same goal
“For the first time now, we shed light on the function of a whole effector cluster in U. maydis, the cluster of ten effector genes encoding the Pleiades,” states Prof. Djamei. The team does so by analyzing the effect of deleting the cluster in the pathogen as well as by producing these proteins in plants. “We showed that a cluster deletion strongly weakens the pathogen and leads to the accumulation of Reactive Oxygen Species [ROS] in infected plant tissues,” explains Dr. Fernando Navarrete, first author on the publication. Rapid production of ROS is a known plant immune defense mechanism, thus allowing the plant to fight the invading pathogen. Eight of the ten Pleiades appear to target specifically this mechanism, albeit by distinct means and despite marked sequence differences. Navarrete elaborates: “Our findings underline the functional relevance of effector clusters in smut fungi. The functional redundancy of the individual players is explained by their mechanistic diversity and complementarity. You must imagine the individual Pleiades as distinct units fighting the same enemy on several battle fronts.”

Promoting flowering to better fight immunity?
In fact, Djamei and his team demonstrate that two of the Pleiades, Taygeta1 and Merope1, inhibit ROS production in different plant cell compartments. Taygeta1 does so in the cell cytoplasm, whereas Merope1 acts in the nucleus. These two “sisters” appear to be taking the lead, mechanistically speaking, in the battle against plant immunity by investing new roles. However, the researchers uncover an even more developed arsenal in the hands of Merope1: this Pleiade appears to affect a family of enzymes that also control flowering time. “An effector that dampens immunity while simultaneously promoting flowering would be a great advantage for smuts, which usually sporulate only in the host floral tissues,” explains Djamei.

In Greek Mythology, Merope is the only Pleiade to fade away upon marrying a mortal, while her sisters conserve their eternal glow. Could it be possible, that this “Lost Pleiade”, as she is often portrayed in 19th century works of art, found her vocation in fighting plant immunity?

This research was carried out mainly at the GMI and was finalized at the Leibniz Institute of Plant Genetics and Crop Plant Research (IPK), Gatersleben, Stadt Seeland, Germany and the Excellence University of Bonn, INRES, Department of Plant pathology.