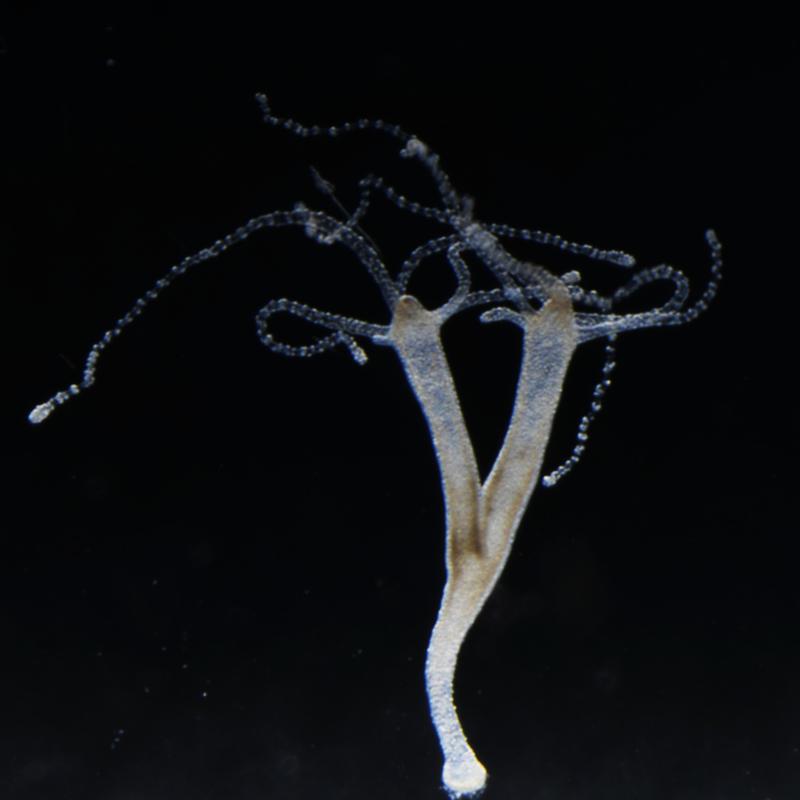 The illustration depicts a two-headed Hydra in which the HAS-7 activity was experimentally blocked. | Copyright: Berenice Ziegler (COS) | Download

In the animal kingdom, specific growth factors control body axis development. They are produced by a small group of cells at one end of the embryo to be distributed in a graded fashion toward the opposite pole. Through this, discrete spatial patterns arise that determine the correct formation of the head-foot axis. Heidelberg researchers have discovered an enzyme in the freshwater polyp Hydra that shapes this process by limiting the activity of certain growth factors.

In the animal kingdom, specific growth factors control body axis development. These signalling molecules are produced by a small group of cells at one end of the embryo to be distributed in a graded fashion toward the opposite pole. Through this process, discrete spatial patterns arise that determine the correct formation of the head-foot axis. A research team at the Centre for Organismal Studies (COS) at Heidelberg University recently discovered an enzyme in the freshwater polyp Hydra that critically shapes this process by limiting the activity of certain growth factors.

In particular, the proteins of the so-called Wnt signalling pathway play an important role in the pattern formation of the primary body axis. Wnt proteins, which arose early during evolution, are considered to be universal developmental factors. “Misregulation of Wnt factors can cause serious malformations during embryonic development and give rise to diseases such as cancer,” explains Prof. Dr Özbek, a member of the “Molecular Evolution and Genomics” department led by Prof. Dr Thomas Holstein at the COS.

Now, the researchers have discovered an enzyme in the freshwater polyp Hydra that can break down Wnt proteins, thereby deactivating them. Hydra is a basal multicellular organism of the phylum Cnidaria that has long been used as a model organism to study the Spemann-Mangold organizer, an embryonic signalling centre in charge of forming the body’s longitudinal axis. The Wnt proteins responsible for this process are continually produced in the mouth region of the adult polyp to maintain the body axis.

The researchers determined that the newly discovered HAS-7 enzyme develops in a ring-shaped zone below Hydra’s tentacle wreath. This region separates the head from the body. If HAS-7 production is experimentally interrupted by suppressing the gene expression, a fully formed second head and a second body axis spontaneously develop. According to Prof. Özbek, something similar occurs when Wnt proteins are artificially produced in the animal’s entire body.

In cooperation with Prof. Dr Walter Stöcker’s group at Mainz University, the Heidelberg researchers were able to show that the HAS-7 enzyme is capable of specifically cleaving the Wnt protein to suppress its activity beyond the head. Without this inhibitory mechanism, the Wnt emanating from the head floods the body, creating a two-headed animal. The HAS-7 enzyme is a member of the astacin family of proteases, which were first identified in crayfish. “Members of the astacin protease family are also found in higher vertebrates. It is therefore likely that we have found a mechanism here that may play a role in humans as well,” states Prof. Holstein.

In a follow-up project within the Collaborative Research Centre 1324 “Mechanisms and Functions of Wnt Signaling”, the researchers will collaborate with Prof. Dr Irmgard Sinning of the Heidelberg University Biochemistry Center to study the molecular mechanism of Wnt cleavage by astacin. “We hope to be able to find clues on the precise point of attack in the Wnt protein,” states Prof. Özbek.

In addition to the Heidelberg researchers from the COS and the Institute for Applied Mathematics, scientists from the German Cancer Research Center, Mainz University, the University of Innsbruck (Austria), the Leiden University Medical Center (Netherlands), and the University of Manitoba (Canada) also contributed to the study. Funding was provided by the German Research Foundation and the Canadian Institutes of Health Research, among others. The results of the research were published in the journal “BMC Biology”.