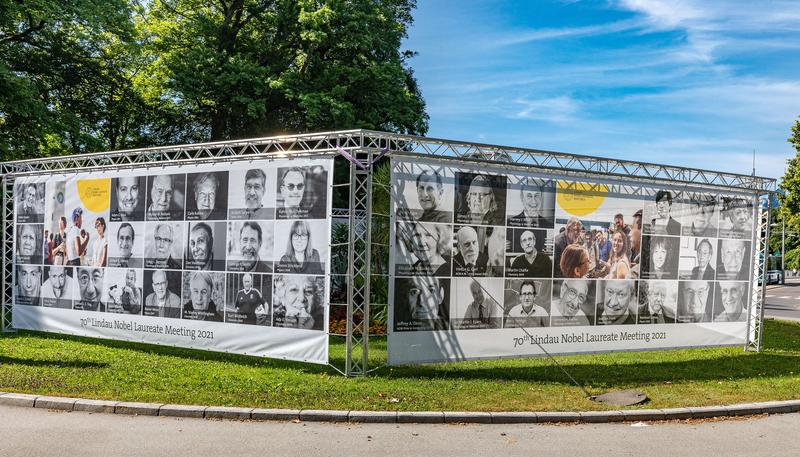 The major challenges facing society today and in the future can only be solved with the help of science, as the COVID-19 crisis has made clear for more than a year now. The world of science and the interested public are looking all the more intensively at Lindau today. At 1.30 p.m., Countess Bettina Bernadotte af Wisborg, as President of the Council, will open the 70th Lindau Nobel Laureate Meeting from the island at Lake Constance.

Because of the pandemic, the anniversary meeting is taking place online. "Especially under such exceptional circumstances, dialogue in science is all the more important," she emphasises the relevance of the event, which has been taking place since 1951. The interdisciplinary programme devotes around 70 hours to highly topical issues such as future pandemics, gene editing, climate change or trust in science.

For the opening ceremony in the Lindau Inselhalle, a few Nobel Laureates will be present, including Reinhard Genzel, 2020 Nobel Laureate in Physics.

Frank-Walter Steinmeier, President of the Federal Republic of Germany, addresses the international scientists in his welcoming speech via video:

"No one would ever have been awarded a Nobel Prize if they had been scared of what is new, scared of the unfamiliar, scared of questions which at first sight may seem barely solvable.
I am delighted that you harness the same courage that you use in your own research to enter into dialogue with colleagues from around the world. And that you approach the political and ethical challenges with the same courage that you display in uncovering new findings and examining their implications."

During her speech in Lindau, Anja Karliczek, Federal Minister of Education and Research, said:

“Germany is a land of knowledge and research that has produced many significant inventions, discoveries and innovations over the centuries. Today, a vaccine developed in Germany is protecting the lives of millions of people around the world in the current pandemic. And Germany produced two of the Nobel laureates of 2020. We can be justly proud of the excellent research that is done in our country.

This success is also very much rooted in the international networking of our scientists. We can only tackle the grand challenges of our time, like climate change and the COVID-19 pandemic, if researchers from around the world develop solutions together. Networking provides the key to our success.

The Lindau Nobel Laureate Meetings make an important contribution to this. Year after year, these meetings bring together Nobel laureates and young researchers from around the world to build networks and discuss the relevant issues in their field. I am therefore delighted that the German Federal Government again has the privilege of supporting yet another Lindau Meeting and hope that all participants will be able to take home new insights and ideas”.

Bernd Sibler, Bavarian State Minister for Science and the Arts, at the opening of the 70th meeting in Lindau at Lake Constance, Bavaria:

“In this anniversary year, the outstanding importance of the Lindau Nobel Laureate Meetings becomes clearer than ever. The Lindau Meetings offer excellent thinkers from all over the world an incomparable platform for the exchange of ideas, knowledge and research results across scientific disciplines, generations and countries. As Bavarian Minister of Science, I am particularly delighted that this extraordinary event is hosted in Bavaria. Not only with our multi-billion technology and innovation initiative “Hightech Agenda Bavaria”, we do everything we can to make the Free State a world-class science location ready for the future. Here in Bavaria, researchers from all academic disciplines should find the best conditions to make our world a better place with their work through an inspiring exchange with one another.”

From the studio in Lindau to participants across the globe

The programme for Nobel Laureates and young scientists as well as some guests will be broadcasted live worldwide from the Inselhalle. The young scientists invited to the 70th meeting who prevailed in the selection process will meet the Laureates on an internet platform, just like at the Online Science Days 2020. The possibilities for virtual encounters have even been expanded for the anniversary meeting: the online platform allows for manifold interaction between participants through chats, exchange via video, various possibilities to ask questions – but also through "social events", concerts and fitness offers.

Traditionally, the Lindau Meeting is also dedicated to questions about the future of scientific conduct. The most recent initiative are the "Lindau Guidelines" for open, just and sustainable science in the 21st century. Around 40 Nobel Laureates have already endorsed the guidelines. From now on, all scientists worldwide as well as scientific institutions can also adopt the ten goals and sign the guidelines online; or declare their support for them, respectively, implement them in their own organisation.

After the opening on Sunday afternoon and until 2 July 2021, the pro-gramme of the 70th Lindau Nobel Laureate Meeting will run daily from 7 a.m. to about 10 p.m. CEST to enable scientists and interested parties from all time zones around the globe to participate actively or as guests via livestream.

- More than 70 Laureates, among them 3 Nobel Laureates who have been awarded in 2020: Harvey J. Alter (Physiology or Medicine), Emmanuelle Charpentier (Chemistry), Reinhard Genzel (Physics)
- 16 Nobel Laureates participate in a Lindau Meeting for the first time
- About 600 young scientists from roughly 100 countries participate – for interactive Q&A and for the panels
- Next Gen Science Sessions offer young scientists their stage
- Lindau Alumni from past meetings may watch the jubilee meeting as guests

With an accreditation (https://accreditation.lindau-nobel.org) for the 70th Lindau Nobel Laureate Meeting, journalists will have access to the programme (https://www.mediatheque.lindau-nobel.org/program/meeting-2021) and can follow the exchange between Nobel Laureates and young scientists. The Lindau Nobel Laureate Meetings as well as the participants will accompany the programme on social media via the hashtag #LINO70. A summary of our press material can be found on our press page.

Photos of the online activities will be added continuously to our Flickr profile (https://www.flickr.com/photos/nobellaureatemeeting/albums). There we have also compiled a retrospect of the past 70 years in the form of pictures.

For questions, the communications team is at your disposal.