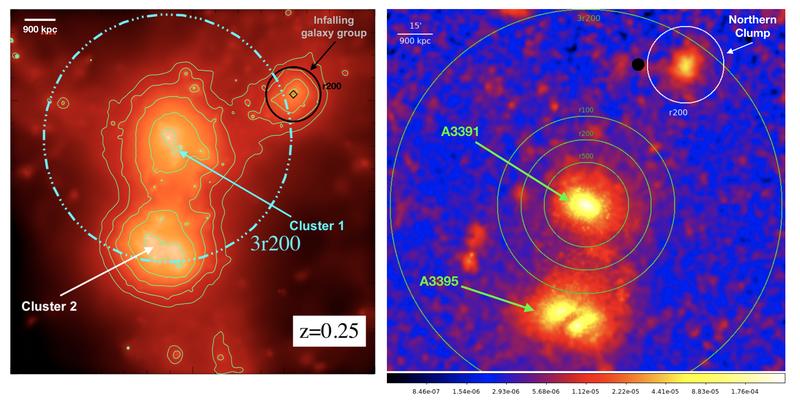 What steers galaxies, or whole ensembles of galaxies - so-called galaxy clusters? Aren’t they surrounded by vast empty space? Could the recently discovered long hot interconnecting gas filaments play a role? Although cosmological models and simulations predicted these structures and the role they may play, the observational confirmation of their existence, using the x-ray space telescope eROSITA, is quite recent. Further snapshots of simulations compared to the observations unveil a galaxy group speeding along such a long gas filament, on a collision course with other galaxy clusters.

One of the early results obtained by eROSITA was the discovery of an extremely long cosmic gas filament connecting the Abell 3391/95 pair of galaxy clusters. Further investigation of that patch of the Universe unveils other clusters, such as the Northern Clump cluster, in the path along this filament[2]. Using their Magneticum Simulations, ORIGINS scientists from the Ludwig-Maximilians-Universität München and INAF Astronomical Observatory of Trieste found a similar galaxy cluster system, embedded in the Cosmic Web and surrounded by infalling galaxy groups[1]. Remarkably, both the observations and the simulations show signs that the infalling galaxy cluster is speeding along such gas filaments to finally merge with the pair cluster.

The region observed by eROSITA around the cluster pair Abell 3391/95 shows signatures of the assembly of cosmic structures. In the Magneticum simulations developed by their group at the University Observatory Munich, Dr. Biffi and PD Dr. Dolag found a very similar pair of galaxy clusters, interconnected by a warm gas bridge and embedded in a longer tenuous filament. “Around these clusters we also found other structures, like galaxy clusters and groups, also connected by filaments, that are all collapsing towards the central knot in the web”, explains Dr. Biffi. With help of the simulations one can in fact follow the evolution with time of all the cosmic structures in the region. “In this way, we could study in particular a galaxy group which resembled at one time in the past, namely 3 Gigayears ago, the Northern Clump observed by eROSITA”, the scientists say. At that time it was about at the same relative distance from the northern cluster in the pair as the Northern Clump is now from A3391.

“Looking at the final snapshot of the system in our simulations we can predict that it will finally merge with the pair cluster”, explains Dr. Biffi. The observational study of the Northern Clump cluster unveiled signatures of this movement, such as a tail of matter behind it, suggesting that it is moving at high speed along the gas filament towards the two clusters A3391 and A3395. In the Magneticum Simulations, the additional structures surrounding the central cluster pairs are also moving towards them at high velocity, showing very similar features. The gas velocities are high, and part of the matter in the group analog to the Northern Clump is also slowed down and finally will be stripped, once the group enters the boundaries of the northern pair cluster.

More than 20 scientists from Germany, Italy, the USA and Australia were involved in the study. eROSITA was developed with funding from the Max Planck Society and the German Aerospace Center (DLR). The current study was funded by the German Research Foundation (DFG), under project number 415510302 and supported by the Excellence Cluster ORIGINS, funded by the Deutsche Forschungsgemeinschaft (DFG, German Research Foundation) under Germany´s Excellence Strategy – EXC-2094 – 390783311.