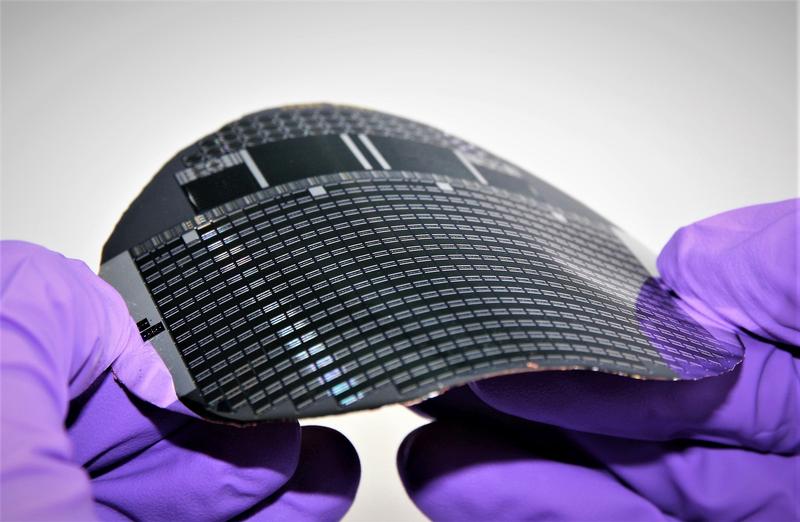 In addition to the classical applications for solar cells on roofs and open spaces, photovoltaic devices can also be used with laser light for efficient power transmission. At the 48th IEEE Photovoltaic Specialists Conference, researchers from the Fraunhofer Institute for Solar Energy Systems ISE recently presented how they were able to achieve a record conversion efficiency of 68.9% with a photovoltaic cell under monochromatic laser light. For this, the research team used a very thin photovoltaic cell made of gallium arsenide and applied a highly reflective, conductive mirror on the backside.

Photovoltaic cells convert light into electricity. The incoming light is absorbed in a cell structure, made of gallium arsenide semiconductor material, for example. The absorbed light sets positive and negative charges free, which are in turn conducted to the front and back cell contacts, generating electricity. This “photovoltaic effect” is particularly efficient when the energy of the incident light lies slightly above the so-called bandgap energy inherent to the semiconductor material. Thus, very high efficiencies are theoretically possible when a monochromatic laser as light source is matched with a suitable semiconductor compound material.

In this new form of energy transfer, called power by light, the laser energy is delivered either through the air or via an optical fiber to a photovoltaic cell whose properties match the power and the wavelength of the monochromatic laser light. Compared to conventional power transmission via copper wires, power by light systems are especially beneficial for applications which require a galvanically isolated power supply, lightning or explosion protection, electromagnetic compatibility, or completely wireless power transmission, for example.

Researchers at Fraunhofer ISE have achieved a record conversion efficiency of 68.9 % for a III-V semiconductor photovoltaic cell based on gallium arsenide exposed to laser light of 858 nanometers. This is the highest efficiency achieved to date for the conversion of light into electricity. This success was made possible with a special thin film technology in which the solar cell layers are first grown on a gallium arsenide substrate which is then subsequently removed. A conductive, highly reflective mirror is applied to the back surface of the remaining semiconductor structure, which is only a few micrometers thick.
“This thin film approach has two distinct advantages for the efficiency,” explains the physicist Dr. Henning Helmers, head of the Fraunhofer ISE research team. “First of all, photons are trapped in the cell and the absorption is maximized for photon energies close to the band gap, which simultaneously minimizes thermalization and transmission losses, making the cell more efficient. Secondly, the photons additionally generated internally by radiative recombination become trapped and effectively recycled. This extends the effective carrier lifetime, thus additionally increasing the voltage.”
The research group investigated thin film photovoltaic cells with back-surface reflectors made of gold and an optically optimized combination of ceramic and silver, with the latter showing the best results. An n-GaAs/p-AlGaAs heterostructure was developed as absorber, which shows particularly low charge carrier losses due to recombination.
“This is an impressive result that shows the potential of photovoltaics for industrial applications beyond solar power generation," says a delighted Prof. Andreas Bett, institute director of Fraunhofer ISE. Optical power transmission has manifold applications. Examples are the structural monitoring of wind turbines; the monitoring of high-voltage lines, fuel sensors in aircraft tanks, or passive optical networks; the optical supply of implants from outside the body; or a wireless power supply for applications in the Internet of Things.