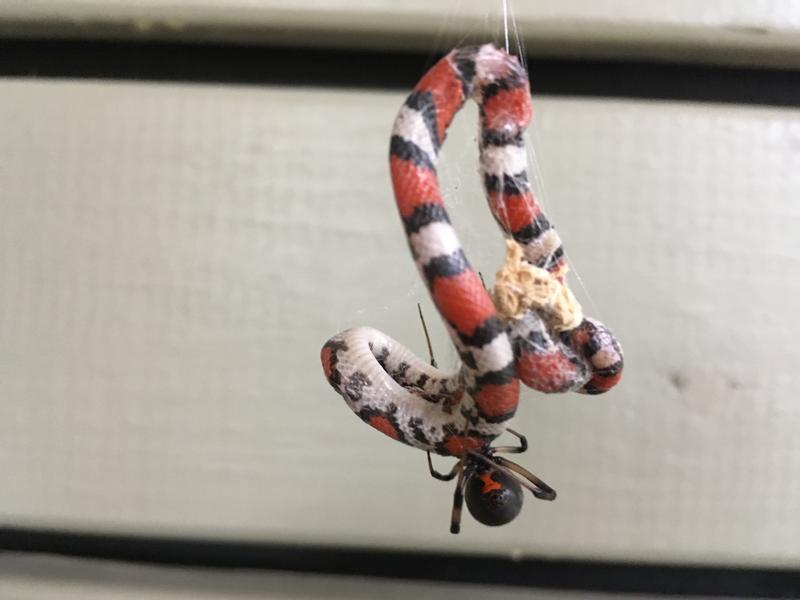 There are spiders that eat snakes. Observations of snake-eating spiders have been reported around the world. Two researchers from Basel and the US consolidated and analyzed over 300 reports of this unusual predation strategy.

Spiders are primarily insectivores, but they occasionally expand their menu by catching and eating small snakes. PD Dr. Martin Nyffeler, arachnologist at the University of Basel, and American herpetologist Professor Whitfield Gibbons of the University of Georgia, USA, got to the bottom of this phenomenon in a meta-analysis. Their findings from a study of 319 occurrences of this unusual feeding behavior recently appeared in the American Journal of Arachnology.

It turns out that spiders eat snakes on every continent except Antarctica. Eighty percent of the incidents studied were observed in the US and Australia. In Europe, on the other hand, this spider feeding behavior has been observed extremely rarely (less than 1 percent of all reported incidents) and is limited to the consumption of tiny, non-venomous snakes of the blind snake family (Typhlopidae) by small web-building spiders.

Incidents of snake predation by spiders have never been reported from Switzerland. A possible explanation is that Switzerland’s native colubrids and vipers are too big and heavy even when freshly hatched for Swiss spiders to subdue them.

The data analysis also showed that spiders from 11 different families are able to catch and eat snakes. «That so many different groups of spiders sometimes eat snakes is a completely novel finding,» Nyffeler emphasizes.

Black widows of the family Theridiidae were the successful snake hunters in about half of all observed incidents. Their potent venom contains a toxin that specifically targets vertebrate nervous systems. These spiders build webs composed of extremely tough silk, allowing them to capture larger prey animals like lizards, frogs, mice, birds and snakes.

Another new finding from the meta-analysis: spiders can subdue snakes from seven different families. They can outfight snakes 10 to 30 times their size.

The largest snakes caught by spiders are up to one meter in length, the smallest only about six centimeters. According to the statistical analysis done by the two researchers, the average length of captured snakes was 26 centimeters. Most of the snakes caught were very young, freshly hatched animals. That some spiders are able to subdue oversized prey is attributable to their highly potent neurotoxins and strong, tough webs.

Possible insights into the effect of spider venom

Many spider species that occasionally kill and eat snakes have venom that can also be lethal to humans. That means the venom of various spider species has a similar effect on the nervous systems of snakes and humans. For this reason, observations of vertebrate-eating spiders can also be important for neurobiology, as they allow conclusions to be drawn about the mechanisms by which spider neurotoxins affect vertebrate nervous systems.

«While the effect of black widow venom on snake nervous systems is already well researched, this kind of knowledge is largely lacking for other groups of spiders. A great deal more research is therefore needed to find out what components of venoms that specifically target vertebrate nervous systems are responsible for allowing spiders to paralyze and kill much larger snakes with a venomous bite,» says Martin Nyffeler.

The captured snakes are anything but helpless themselves: about 30 percent are venomous. In the US and South America, spiders sometimes kill highly venomous rattlesnakes and coral snakes. In Australia, brown snakes – which belong to the same family as cobras – often fall prey to redback spiders (Australian black widows). Martin Nyffeler says, «These brown snakes are among the most venomous snakes in the world and it’s really fascinating to see that they lose fights with spiders.»

When a spider catches a snake, it will often spend hours or days feasting on such a large prey. Spiders have an irregular feeding pattern. When a lot of food is available, they eat in excess, only to go hungry for long periods again afterward. They store excess food as energy reserves in their body and use it to tide them over longer periods of starvation.