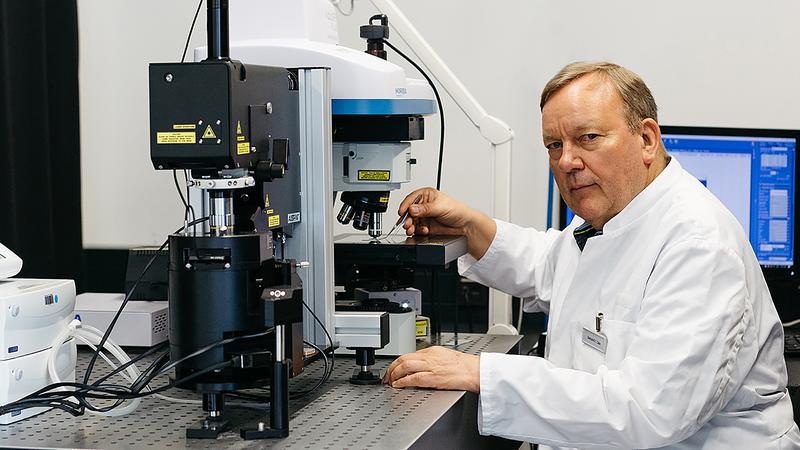 Efficiently doping the semiconductors of tomorrow: A team from the Helmholtz-Zentrum Dresden-Rossendorf (HZDR) achieved a breakthrough with the support of the Semiconductor Physics Research Group at Chemnitz University of Technology.

(Source: Press release by Helmholtz-Zentrum Dresden-Rossendorf with additions by Chemnitz University of Technology)

Electronics of the future are unthinkable without two-dimensional materials. They are the great hope for high-performance and energy-efficient electronic components. At the same time, however, the unique properties of two-dimensional materials make them difficult to dope with foreign atoms. This step is necessary to precisely tune the electrical conductivity and turn the material into a p- or n-type semiconductor. At this point, a team led by Dr. Slawomir Prucnal of the Helmholtz-Zentrum Dresden-Rossendorf (HZDR), with the help of the research group of Dr. Arkady Krasheninnikov at HZDR and Prof. Dr. Dietrich Zahn (https://www.tu-chemnitz.de/physik/HLPH/members.php?id=10) at the Institute of Physics at Chemnitz University of Technology, has now achieved a breakthrough. The researchers report on this breakthrough in the journal Nanoscale (DOI: 10.1039/D0NR08935D). The cover layer used makes it possible to process new materials using previously established methods for conventional semiconductors. This is a big step on the way from the laboratory to industrial production.

Conventional semiconductors, such as those found in today's home computers, cell phones, and industrial computers, are based on silicon. The technology behind them is well researched, and the production processes have been optimized. However, in order to satisfy the increasingly power-hungry modern electronics, silicon is reaching its limits. Alternatives must be found. These come in the form of ultra-thin, two-dimensional materials. The best known is probably graphene. But there are now many others, such as those from the class of materials known as transition metal dichalcogenides. They all have one thing in common: they are only a few atomic layers thick. In the case of the molybdenum diselenide studied by Slawomir Prucnal, for example, there are exactly three, which together are a hundred thousand times thinner than a human hair.

"In order for materials such as silicon or the new 2D materials to function as electronic components, we have to change their internal properties," explains Slawomir Prucnal, who works at the HZDR in the Semiconductor Materials Department of the Institute of Ion Beam Physics and Materials Research. "To do this, we introduce some foreign atoms into the regular crystal lattice. That's what we call doping." In the industrial production of silicon chips, this is done by ion implantation. It is carried out by directing a beam of charged particles onto the material, some of which are built into the crystal lattice. "With two-dimensional materials, this is difficult," says Slawomir Prucnal. "That's because the ions from the beam have to stop exactly in the few atomic layers that make up the material."
That's why he and his team at HZDR have added a special cover layer to the new materials. The structure of this layer gives the scientists the ability to control the process of doping very precisely. "Now we can precisely transport the impurity atoms from the ion beam into the crystal lattice of the 2D material so that they are incorporated there." This has a key advantage: thanks to the capping layer, the new materials can be processed with the same production equipment used for today's silicon chips.

After Slawomir Prucnal and his research group proved that their concept works with molybdenum diselenide (MoSe2) - a material from the class of transition metal dichalcogenides - and doping with chloride ions, they are currently testing other 2D materials. The efficiency of incorporating chloride ions as a dopant in the 2D semiconductor MoSe2 was demonstrated using inelastic light scattering, or Raman spectroscopy. "Once again, Raman spectroscopy proves to be the outstanding tool to understand the properties of 2D materials," explains Prof. Dr. Dietrich R.T. Zahn, holder of the Professorship of Semiconductor Physics at Chemnitz University of Technology. In the next step, the implantation method will be used to produce a fully functional electronic circuit. The scientists also want to demonstrate the optical properties of the 2D semiconductors, because unlike silicon, such materials are very good light emitters. "Today's circuits communicate with a flow of electrons; that is, with electric current," explains Slawomir Prucnal. "Circuits made of the new materials, on the other hand, could communicate with a flow of photons; that is, with light. Such nano-opto-electronic devices are not only much faster; they also require much less energy and generate no waste heat."