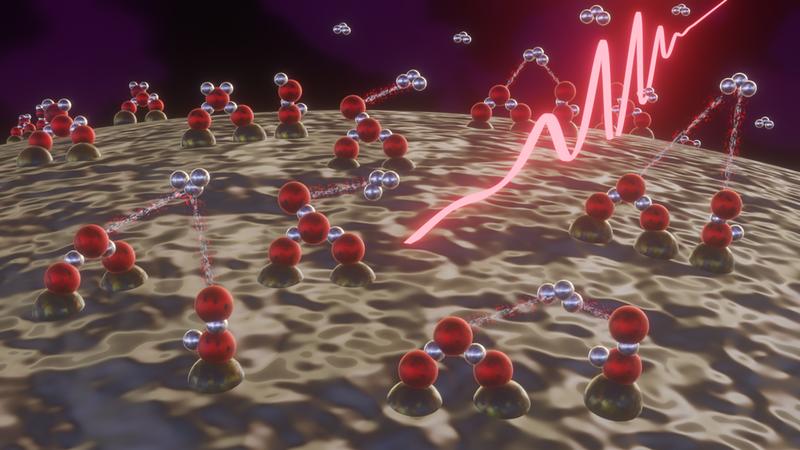 Using intense pulses of laser light, members of the attoworld team at the Max Planck Institute for Quantum Optics and the Ludwig-Maximilian University have synthesized trihydrogen ions from water molecules adsorbed onto nanoparticles.

The research group Field-Resolved Nano-Spectroscopy at attoworld, led by Prof. Matthias Kling of the Max Planck Institute for Quantum Optics (MPQ) and the Ludwig-Maximilian University in Munich (LMU), in cooperation with the American University in Sharjah, has discovered a new method for the production of protonated hydrogen (H3+). With the aid of high-intensity laser pulses, they were able to trigger a reaction between water molecules on the surface of nanoparticles resulting the creation of trihydrogen ions. This scenario mimics the conditions found in outer space, in which dust/ice particles are exposed to radiation that is energetic enough to induce the formation of trihydrogen ions.

The conditions in outer space can only be described as extreme. The temperature is exceedingly low and radiation is unremitting. It’s most certainly a forbidding environment for organisms like us – yet it may well have played a positive role in the emergence of life on our planet. For example, a protonated form of hydrogen has been detected among the molecules that are so sparsely distributed in the vast reaches of the cosmos. This ionized molecule, H3+ (also known as the trihydrogen ion) is made up of three protons and two electrons, and takes the form of an equilateral triangle. Owing to its highly reactive nature, protonated hydrogen promotes the formation of more complex hydrocarbons. It is therefore regarded as an important catalyst for the synthesis of organic, carbon-based molecules that form the basis of life as we know it.

Up until now, H3+ has only been synthesized on Earth from preformed organic compounds or in highly energized hydrogen plasmas. Laser physicists have now discovered a new route for the synthesis of H3+ on nanoparticles – in a system that effectively reproduces conditions under which the molecule can be formed in space. Their findings thus provide new insights into the formation of trihydrogen ions under extraterrestrial conditions.

In the experiments, water molecules adsorbed on the surface of silicon dioxide nanoparticles were irradiated with extremely powerful, ultrashort femtosecond laser pulses, essentially mimicking the effect of the high-energy radiation to which dust/ice particles are exposed in outer space. The laser light resulted in the ionization and subsequent splitting of the water molecules on the nanoparticles. This sequence of events in turn enabled the trihydrogen cation H3+ to be produced via a reaction between pairs of water molecules. “Our experiments demonstrate that the production of H3+ on ice-coated dust particles can take place in the absence of any other factors. This finding will help us to understand how the formation of complex molecules is driven under the conditions found in outer space,” says Matthias Kling.