The Twinkle and the Brain 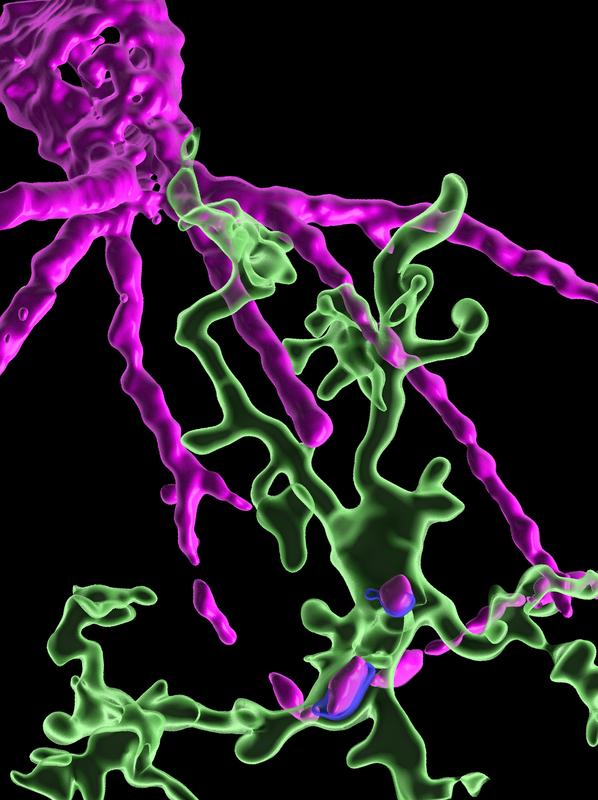 Scientists at the IST Austria rejuvenate mouse brains with ketamine or flickering light.

In defining periods of development, the brain re-organizes connections between its neurons more freely than in its adult form. Researchers around Sandra Siegert at the Institute of Science and Technology (IST) Austria have now discovered two methods to reopen such plasticity: repeated ketamine anesthesia and non-invasive 60 hertz light flickering. The journal Cell Reports now published their findings, which have the potential to become a therapeutic tool applicable to humans.

Can you remember the smell of flowers in your grandmother's garden or the tune your grandpa always used to whistle? Some childhood memories are seemingly engrained into your brain. In fact, there are critical periods in which the brain learns and saves profound cognitive routines and memories. The structure responsible for saving them is called the perineuronal net.

This extracellular structure envelops certain neurons, thereby stabilizes existing connections – the synapses – between them and prevents new ones from forming. But what if we could remove the perineuronal net and restore the adaptability of a young brain? The neuroscientist Sandra Siegert and her research group at IST Austria now published two promising techniques to do so.

Taking Ketamine or Flashing Lights
It all began four years ago when the researchers at IST Austria found that microglia cells in mice become very reactive after they had anesthetized animals with the drug ketamine. Microglia are typically seen as the brain's immune cells. However, recent studies have shown that they also interact with the neurons. The reactive microglia have the ability to eat synapses and even entire neurons, which is often seen in the late phases of Alzheimer's disease.

"The strong response of the microglia upon ketamine anesthesia surprised us," explains Alessandro Venturino, leading author in the study and member of the Siegert group. "But we did not see any synapses or dead neurons vanishing. So, we were puzzled, what the microglia were actually eating." It turned out to be the perineuronal net that protects and stabilizes the connections between neurons.

"Alessandro came to my office and told me that the perineuronal net was gone. I could not believe it," Siegert remembers. They had applied repeated anesthetic dosages of ketamine to mice. Ketamine is an essential drug for human surgery and was also recently approved for treating psychiatric symptoms. "After just three treatments, we could see a considerable loss in the perineuronal net, which lasted for seven days before being rebuilt."

When Siegert shared the results with Mark Bear, collaborating neuroscientist at the Massachusetts Institute of Technology (MIT), he was equally amazed and intrigued by the potential of this discovery. "In biology, you rarely witness such a black-and-white situation," Siegert continues. "Yet, the cherry on top was the effect of the 60-hertz light flickering."

Neurons communicate by sending electric impulses to each other. These are coordinated to create waves of signals – so-called brainwaves – which can be influenced by external sensory information, for example, light shining into the eyes. "It had been previously shown that light flickering 40 times a second – at 40 hertz – can promote microglia to remove plaques in Alzheimer disease. But it did not remove the perineuronal net," Venturino explains. But when the scientists then put mice in boxes with light flickering 60 times a second, it had a similar effect as the ketamine treatments. "This fine-tuning between distinct brainwaves and the microglia action is the most fascinating and might be a new way of thinking about brainwaves."

Caution and Possibilities
Previously established strategies to remove the perineuronal net are long-lasting and extremely invasive. The high-dosage ketamine treatment but even more so the 60-hertz light flickering are minimally invasive. Therefore, they could open new therapeutic approaches in humans.

Once the blocking of the perineuronal net in the brain is lessened, neurons are again sensitive to new input, and new synapses can be formed. "But it is not like you take ketamine as a drug and become smart", Venturino emphasizes. By re-establishing plasticity, one could potentially overwrite traumatic experiences and treat post-traumatic stress disorder. "But we are very cautious because in this formative window also something traumatic could happen," Siegert says. "It is probably also not a good idea to blast yourself with flickering light."

There are various possible applications for these treatments, one being amblyopia, also known as the lazy eye. This sight disorder is caused by an unbalanced visual input during a child's development and, if untreated, leads to permanent loss of vision. Another topic the researchers want to investigate is the molecular mechanisms behind their discovery which are still not fully understood. Venturino puts it in a nutshell: "There is a lot to explore."