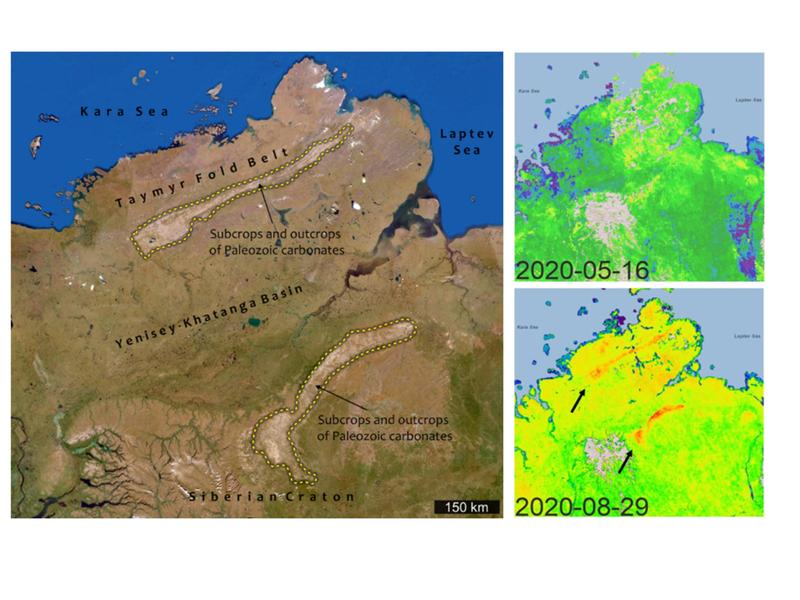 Which effects did the heat wave of summer 2020 have in Siberia? In a study led by the University of Bonn, geologists compared the spatial and temporal distribution of methane concentrations in the air of northern Siberia with geological maps. The result: the methane concentrations in the air after last year's heat wave indicate that increased gas emissions came from limestone formations. The study is published in the journal Proceedings of the National Academy of Sciences (PNAS).

Permanently frozen permafrost soils cover large areas of the northern hemisphere, especially in northern Asia and North America. If they thaw in a warming world, this can pose dangers, because CO2 and methane are released during thawing - and amplify the anthropogenic greenhouse gas effect. "Methane is particularly dangerous here because its warming potential is many times higher than that of CO2," explains Prof. Dr. Nikolaus Froitzheim from the Institute of Geosciences at the University of Bonn. Pessimists therefore already spoke of an imminent "methane bomb." However, most previous projections showed that greenhouse gases from thawing permafrost will contribute "only" about 0.2 degrees Celsius to global warming by 2100. This assumption has now been challenged by a new study by Nikolaus Froitzheim and his colleagues Jaroslaw Majka (Krakow/Uppsala) and Dmitry Zastrozhnov (St. Petersburg).

Most previous studies only dealt with emissions from the decay of plant and animal remains in the permafrost soils themselves. In their current study, researchers led by Nikolaus Froitzheim made a comparison between methane concentrations in Siberian air, determined by satellite-based spectroscopy, and geological maps. They found significantly elevated concentrations in two areas of northern Siberia - the Taymyr Fold Belt and the rim of the Siberian Platform. What is striking about these two elongated areas is that the bedrock there is formed by limestone formations from the Paleozoic era (the period from about 541 million years ago to about 251.9 million years ago).

In both areas, the elevated concentrations appeared during the extreme heatwave in summer 2020 and persisted for months after. But how did the additional methane occur in the first place? “The soil formations in the observed areas are very thin to nonexistent, making methane emission from the decay of organic soil matter unlikely," says Niko Froitzheim. He and his colleagues therefore suggest that fracture and cave systems in the limestone, which had been clogged by a mixture of ice and gas hydrate, became permeable upon warming. “As a result, natural gas being mainly methane from reservoirs within and below the permafrost can reach the Earth’s surface," he says.

The scientists now plan to investigate this hypothesis by measurements and model calculations to find out how much and how fast natural gas may be released. "The estimated amounts of natural gas in the subsurface of North Siberia are huge. When parts of this will be added to the atmosphere upon thawing of the permafrost, this could have dramatic impacts on the already overheated global climate," emphasizes Niko Froitzheim.

Participating institutions:
The universities of Bonn, Uppsala and AGH Krakow as well as the Karpinsky Russian Geological Research Institute in St. Petersburg were involved in the study.