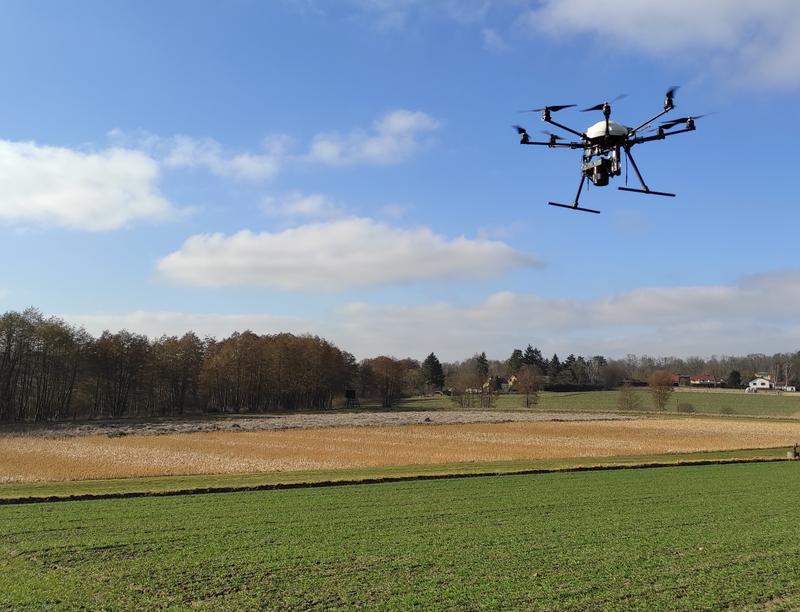 Artificial intelligence (AI) will in future enable drones to provide precise information on the occurrence of weeds in cereal crops and pinpoint where in the field which plant species is present and in which density. Better precision in crop protection will help to reduce environmental impacts and improve biodiversity in the field. The project 'weed-AI-seek' (coordinated by ATB) is aimed at an intelligent monitoring and mapping system that focuses on the real-time assessment of weed distribution in cereal crops. The project 'BETTER-WEEDS' (coordination JKI) focuses on the application of AIs for environmentally sound weed management by means of a knowledge-based site analysis.

High-resolution aerial image data captured from a low flight altitude will be analyzed already during the overflight on board by artificial intelligence. ATB researchers are currently working on this vision in the 'weed-AI-seek' project. A core task here is to optimize trained and tested AI models for the identification of weed species in real time so that AI can be used directly on the drone. Ultimately, the system shall not only to be able to distinguish between the crop and any unwanted accompanying flora, but also to identify weed species with high competitive potential, and to locate their density and positions in the field. These data will provide the basis for application maps that enable subsequent targeted control of specific weeds. It will allow the optimization of control measures both in terms of the quantities of herbicides applied and the composition of active agents.

In the future, the data could be transmitted even directly and in real time to a crop protection sprayer that is able to selectively apply the appropriate herbicide for the respective species with high precision. „Such plant protection devices equipped with multiple tanks are already under development", explains ATB scientist Dr. Michael Pflanz, who is currently researching in the 'BETTER-WEEDS' project on the knowledge-based site analysis for environmentally sound weed management in integrated crop production.
We want to abandon broad-spectrum herbicides and target only those plant species that have a major negative impact on yields in field crops, such as wheat. This is a small but important step toward preserving biodiversity," says Pflanz.

Farmers are increasingly confronted with social and political pressure for a more ecologically sound management of farmland, but for economic reasons they often opt for conventional intensive weed control. Cost-effective and time-efficient tools for recording different weed species and densities could offer a solution.

"We are interested primarily in the question of which weed species causes the greatest competitive pressure in which crop and under which site conditions. Here, AI is helping us to generate reliable insights," explains Pflanz. "Our focus is primarily on promoting an increased weed diversity while controlling highly competitive weed species."

The 'BETTER-WEEDS' project therefore aims at autonomous recording, AI-based identification and evaluation of weed species occurring on agricultural land. From these data, georeferenced distribution maps can be generated, which also take site-specific characteristics into account.

The complementary results of these two projects will help to reduce environmental impacts and improve biodiversity in the field through enhanced precision in crop protection.

Both projects started in spring and are funded by the German Federal Ministry of Food and Agriculture (BMEL) for a period of three years. Partners in the ATB-coordinated project "Development of an intelligent UAV-based weed monitoring system for selective and site-specific herbicide application" (weed-AI-seek) are CiS-GmbH and Hochschule Harz, Harz University of Applied Sciences. The joint project "Knowledge-based site analysis for environmentally sound weed management in integrated crop production" (BETTER-WEEDS) is coordinated by Julius Kühn-Institut, (JKI), Institute for Plant Protection in Arable Crops and Grassland. Partners in the project are ATB, MPI for Biogeochemistry, TU Ilmenau and Spleenlab GmbH.

The Leibniz Institute for Agricultural Engineering and Bioeconomy is a pioneer and a driver of bioeconomy research. We create the scientific foundation to transform agricultural, food, industrial and energy systems into a comprehensive bio-based circular economy.
We develop and integrate techniques, processes and management strategies, effectively converging technologies to intelligently crosslink highly diverse bioeconomic production systems and to control them in a knowledge-based, adaptive and largely automated manner.
We conduct research in dialogue with society - knowledge-motivated and application-inspired. www.atb-potsdam.de/en