Interaction between DLC coatings and ZDDP lubricant: it all depends on the right hardness! 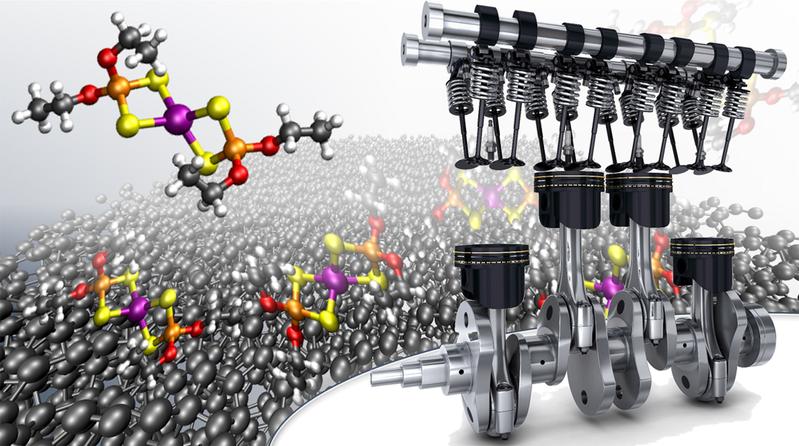 In combustion engines, in plain bearings and in aerospace: diamond-like carbon coatings (DLC) reduce friction and wear in frictional contacts. In most cases, the lubricants used in bearings and engines contain the additive zinc dialkyl dithiophosphate (ZDDP), which in turn protects steel surfaces against wear. Unfortunately, it can attack the DLC layer, leading to premature failure. Researchers at the Fraunhofer IWM have discovered how the antagonistic interaction between the two substances occurs. In the journal Nature Communications, they explain why DLC layers can also be too hard in combination with ZDDP.

Hard carbon coatings are used on a large industrial scale worldwide. Due to their good surface passivation, they prevent cold welding of the interacting bodies, and their high hardness protects the underlying material against wear. This is prevalently employed by the automotive industry, which uses more than 100 million coated parts a year with a market volume of several hundred million euros. The coatings ensure lower friction and thus lower consumption of drive energy and thus lower CO2 emissions. Although publications to date have indicated that ZDDP could attack the DLC layer, it was unclear whether this is always the case and how this effect can be avoided. In the “Prometheus” project funded by the German Federal Ministry for Economic Affairs and Energy (BMWi), the Fraunhofer Institute for Mechanics of Materials IWM joined forces with companies from lubricant development and the automotive industry to decipher, among other things, the tribological processes between the DLC layers and the additives. In the process, the Fraunhofer IWM collaborated with the École Centrale de Lyon as an external partner.

Experiments with layers of different hardness

“In the DLC coatings, we use tetrahedrally bonded hydrogen-free amorphous carbons, ta-Cs,” explains Prof. Michael Moseler, head of the group “Multiscale Modeling and Tribosimulation” at the Fraunhofer IWM. “These come in different degrees of hardness and accordingly some of their other mechanical properties differ as well.” For this reason, the scientists considered not only different lubricant compositions but also different ta-C coatings in all experiments and simulations.

First, the project team had to determine the friction coefficients and wear for different ta-C coatings in conjunction with differently formulated lubricants. Prof. Dr. Maria-Isabel de Barros Bouchet and her colleagues at the Laboratoire de Tribologie et Dynamique des Systèmes (LTDS) investigated this in several tests. “The data is collected by moving a cylinder back and forth on a plate along a distance of 10 mm,” explains Prof. Moseler. “You examine this for each of the different hard coatings with a base oil and a lubricant containing ZDDP.” This allows wear to be measured and the coefficient of friction to be calculated. When the scientists used the base oil, friction and wear were, as expected, smaller when the DLC coating was harder.

In the tests in which 1 percent ZDDP was added to the oil, a more surprising picture emerged: “With the comparatively soft coating, ta-C(51), friction and wear remain low. However, with the harder coatings, ta-C(66) and ta-C(78), friction and wear go through the roof!” says Dr. Gianpietro Moras - co-author and team leader in Prof. Moseler's group. This is not only very critical for engine applications, but also atypical from a tribological point of view: “Normally, we assume that wear decreases with increasing hardness,” states the tribology expert.

The tribologists at the Fraunhofer IWM looked for the reason for this phenomenon in the bonding of the materials. In an X-ray photoelectron spectroscopy analysis, they showed that many sulfur-carbon bonds are formed during friction in both ta-C(66) and ta-C(78). “The ZDDP molecule contains a lot of sulfur,” Moras says. “Our quantum molecular dynamics calculations show that the molecule dissociates during friction under high surface pressures, releasing the sulfur. This gets into the hard layers, which lose massive strength due to this doping and thus become more susceptible to abrasion.”

Using contact mechanics calculations, Moseler's group was able to deduce the reason for the sulfur doping: “The local pressure that occurs when two surfaces collide with each other depends largely on the hardness and stiffness of the layers,” explains Moseler. In concrete terms, this means: the stiffer the layer, the greater the local pressure between the two surfaces. “We model as precisely as possible what happens at the interface between the two friction partners. With low surface pressure, the ZDDP molecule is ground and forms a glassy protective layer between the two friction partners.” This is the desired effect of the lubricant. “At higher surface pressure, the molecule is also ground, but the pressure is then so great that the two surfaces are virtually cemented together and the sulfur is rubbed into both surfaces.” This so-called cold welding weakens the DLC layer and leads to increased wear, he said. “The industry can certainly use ta-C coatings,” concludes the tribologist, “The coating must just not be too soft, so that friction doesn't increase, and not too hard, because otherwise wear will increase.”

Fit for the future with DLC layers

Prof. Dr. Moseler and his group specialized in understanding tribological systems at the atomic scale 15 years ago. “Prometheus” is a joint project funded by the German Federal Ministry for Economic Affairs and Energy (BMWi) to optimize friction in engines by using triboactive high-performance carbon and iron-based coatings and lubricants; funding code: 03ET1609E.