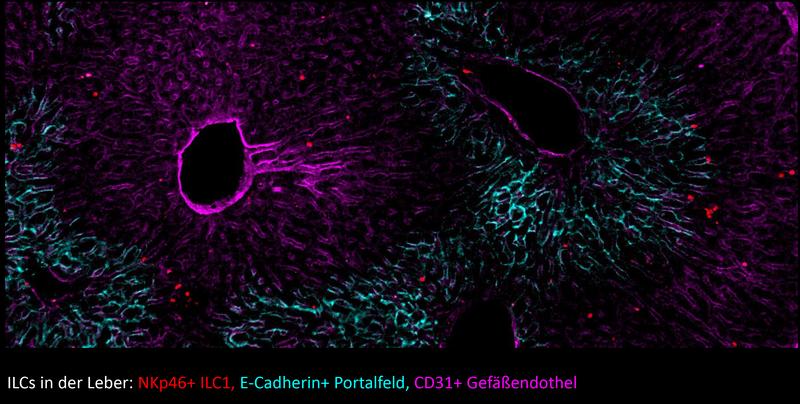 Against infections, tumours and inflammations, immune cells are locally positioned as rapid reaction forces in the organs of the body. On site, they specialise and take on various tasks.

When pathogens invade the human body, a rapid response is required. At the forefront of the immune response are special immune cells. They reside in various tissues such as the lungs, liver, skin and intestines, where they take up the fight against invaders at an early stage. Their name: innate lymphoid cells, or ILCs for short.

A special property of these cells: They do not have to be alerted first in lymphoid organs, like many other immune cells, in order to then migrate to their place of action. Instead, they settle in the tissues and organs shortly after birth and remain there permanently.

ILCs can arise in tissues from immature precursor cells and mature into operational immune cells. This was recently shown by scientists of the Max Planck Research Group at the Institute of Systems Immunology of Julius-Maximilians-Universität (JMU) Würzburg in Bavaria, Germany. (https://www.uni-wuerzburg.de/en/news-and-events/news/detail/news/immune-cells-as-guests-in-the-tissue-1/ ). Until now, it was unclear how this maturation proceeds in detail.

"We wanted to understand how immature ILCs become effector cells that can, for example, kill tumour cells or fight infections with the help of cytokines," explains Professor Georg Gasteiger, chair and head of the Max Planck Research Group at the JMU Institute of Systems Immunology.

To do this, the Würzburg researchers studied the group of ILC1s that play a role in viral infections and in tumour defence. They have recorded all mRNA molecules of individual ILC1s in the liver and created a virtual cell atlas from these analyses (https://go.uniwue.de/hobit ).

Based on these "molecular fingerprints", the researchers recognised that there are specialised cells within the ILC1 that share their tasks: "We found cells that can multiply very quickly and thus provide for replenishment of ILCs. In the process, they specialise into so-called helper or killer ILCs."

Gasteiger's team found that the helper cells produce a wide range of messenger substances (cytokines) that play a role in the early phase of infections, for example. The killer cells, on the other hand, are armed with molecules that allow them to recognise and kill tumour cells.

"Until now, it was thought that these cells were different types of ILCs" explains Christin Friedrich. The postdoctoral researcher from Gasteiger's team is the first author of the publication, which appeared in the renowned journal Nature Immunology. "But our data show that they are different degrees of specialisation that can arise in each organ from the same supply troops."

Can killer ILCs be made therapeutically useful?

"Interestingly, however, ILCs only develop into killer cells in some tissues, although our data show that they have the potential to do so in all tissues" explains Gasteiger.

"We have initial evidence that this development is actively suppressed in some tissues, possibly to avoid tissue damage or inflammation. We now want to understand how we can therapeutically activate the killer cells, for example to improve immune control of developing tumours and metastases. We also want to investigate which molecules the ILCs can use to recognise tumours and how they behave in different tissues during infections."

Christin Friedrich adds: "Our work shows how the transcription factor Hobit drives specialisation to mature effector cells. It is exciting that Hobit is also expressed in other killer cells of the human immune system. Based on our results, the function of Hobit in these defence cells can now be explored, how they mature and how they might be induced to fight tumours in different tissues."