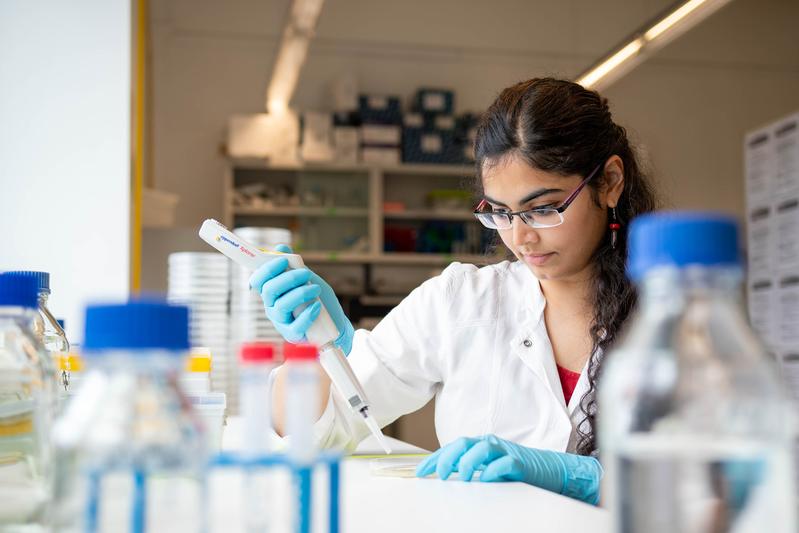 Public health is coming under increasing pressure worldwide due to the antibiotic crisis: the rapid increase in resistance of bacterial pathogens could mean that in the near future bacterial infections that are usually harmless will be difficult or impossible to treat. The spread of antibiotic resistance is based on the ability of pathogens to adapt quickly to the drugs. In principle, evolutionary theory assumes that this adaptation is more difficult when environmental conditions change rapidly. Sequential antibiotic therapy, which involves switching between different antibiotics in a short time, could therefore lead to a reduction in the spread of resistance. This therapeutic approach is usually not considered in medical treatment and is also hardly investigated in basic research - despite the possible long-term benefits.

Researchers at Kiel University are using evolutionary theory and experimental methods to investigate the underlying mechanisms of antibiotic resistance evolution. As part of the DFG Research Training Group “Translational Evolutionary Research” (RTG TransEvo) at Kiel University, the researchers led by Professor Hinrich Schulenburg from the Evolutionary Ecology and Genetics research group have investigated how the rapid sequential administration of antibiotics affects the evolution of resistance in the pathogen Pseudomonas aeruginosa. In doing so, they made an unexpected discovery: surprisingly, the sequential administration of antibiotics with the same mode of action killed the pathogens particularly effectively and at the same time inhibited the emergence of antibiotic resistance. The Kiel researchers, together with international colleagues, recently published their new results in the scientific journal eLife as part of a special issue on evolutionary medicine.

The Kiel research team investigated the effect of different sequences of antibiotics on the bacterium Pseudomonas aeruginosa, which can cause pneumonia and other infections in humans. The scientists wanted to test whether sequential antibiotic treatment can slow down the evolutionary adaptation of the pathogen and limit the formation of resistance. To do this, they applied three different sequences of antibiotics and measured their effectiveness in killing the bacteria. Two of these sequences consisted exclusively of antibiotics belonging to the class of beta-lactams. These penicillin-like agents fight infections by interfering with cell wall formation as the bacteria multiply. A third treatment sequence consisted of unrelated antibiotics, whose antibacterial effect is based on different mechanisms in each case.

"Surprisingly, sequential treatment with both groups of beta-lactam antibiotics killed the bacterial populations better than some of the unrelated antibiotics," points out Aditi Batra, a PhD student in the Evolutionary Ecology and Genetics Group and at the Max Planck Institute for Evolutionary Biology in Plön. "We also found that a rapid switch between the individual antibiotics leads to a much better eradication of bacterial populations than a slower sequence of agents," says first author Batra, a member of the Kiel RTG TransEvo. This suggests that rapid switching between antibiotics limits the bacteria's ability to adapt to the drugs.

In view of the unexpected result, the research team looked for the causes of this evolutionary development. To do this, they characterized the growth and resistance evolution rates of Pseudomonas aeruginosa populations treated with the most effective beta-lactam sequence, including the drugs carbenicillin, doripenem and cefsulodin. "When this sequence was changed rapidly every twelve hours, bacterial growth was strongly inhibited, especially during the switch to doripenem," Batra explains. "This could indicate that resistance to this drug evolves particularly slowly," Batra continues.

The Kiel researchers also found that the effectiveness of the rapid switches is further enhanced by so-called collateral sensitivity. This occurs when the evolution of resistance to one antibiotic leads to an increased sensitivity to another antibiotic. Again, this effect occurred particularly frequently when the antibiotic doripenem was used. "The bacteria become resistant to one antibiotic, but at least retain the original level of susceptibility to a second drug or even become more sensitive," Batra explains. Earlier research from the Kiel research group had already shown that the principle of collateral sensitivity plays a significant role in the effectiveness of sequential antibiotic treatments and at the same time can minimize resistance evolution.

The new research results thus refute the previous assumption that sequential treatment with similar antibiotics accelerates resistance evolution. In the experiment, the scientists were able to show that this is not the case when the evolution of resistance to one of the antibiotics is inhibited and, in addition, the antibiotics show collateral sensitivity to each other. "Beta-lactam antibiotics are actually not combined in medical treatment because of the presumed danger of cross-resistance," emphasises Schulenburg, an evolutionary biologist and spokesperson of the RTG TransEvo and the Kiel Evolution Center (KEC) at Kiel University. "In the context of a rapid sequential administration of these antibiotics, however, cross-resistance does not seem to occur, but instead the observed collateral sensitivity even increases treatment efficiency," Schulenburg continues, who also conducts research in the Cluster of Excellence PMI on individualised antibiotic therapy for chronic lung infections.

In principle, the now published research work from the TransEvo Research Training Group shows that an individual assessment of resistance rates is an important indicator for the combination of antibiotics in sequential treatments. Therein lies the opportunity to improve the efficacy of already existing antibiotics in the future by applying them in combinations that are usually not used. "This shows that even the currently available antibiotics still offer the potential for highly effective treatments, despite rising resistance rates. To take advantage of this potential, however, we need to review and, if necessary, revise current guidelines for antibiotic use. Evolutionary principles should be the basis for novel antibiotic therapies and current findings on resistance evolution should be taken into account," Schulenburg concludes.

https://www.uni-kiel.de/de/pressemitteilungen/2021/188-batra-elife-plate.jpg
Caption: To investigate the evolution of resistance, the Kiel researchers looked at the growth and resistance formation rates, as well as the genetic information of the bacterial populations treated with different antibiotic sequences.
© Dr Sabrina Köhler, Kiel University