Deadwood in the global carbon cycle 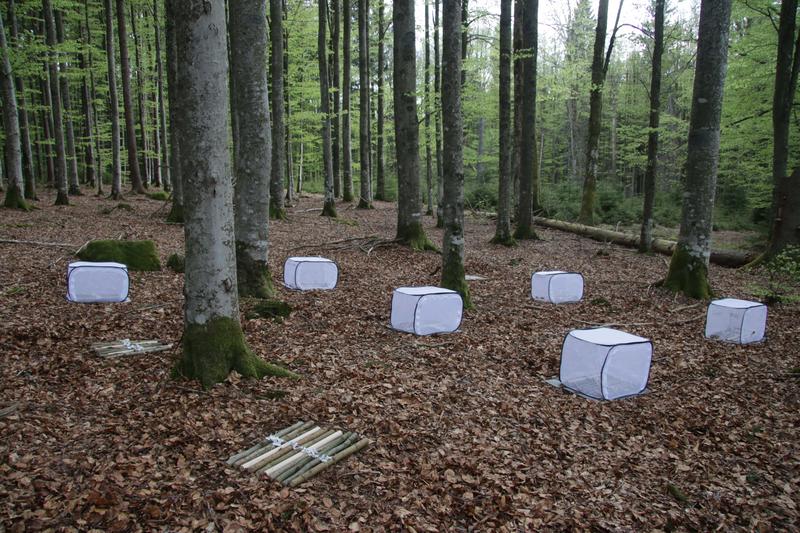 Experiment with deadwood in the Bavarian Forest National Park: some of the wood is kept in cages to keep insects at bay. | Quelle: Sebastian Seibold / TUM | Copyright: Free for use in reporting on TUM, with the copyright noted. | Download 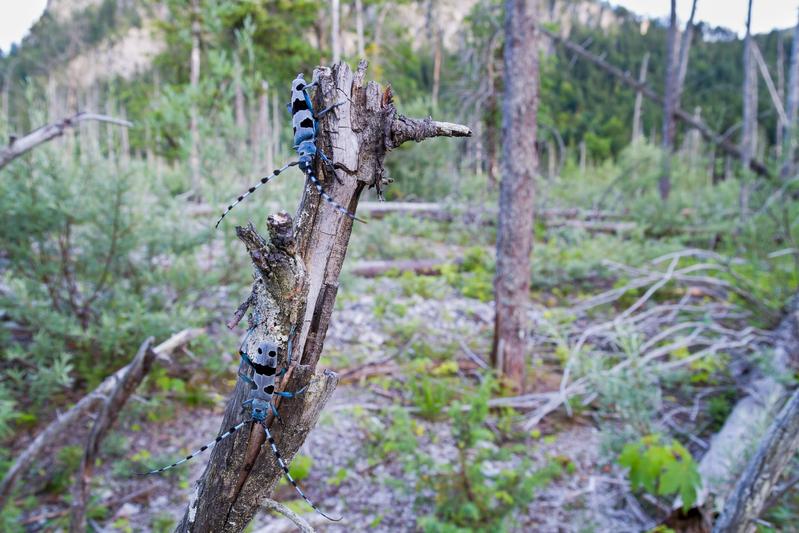 The alpine longhorn beetle (Rosalia alpina) belongs to the family of longhorn beetles. Its larvae feed on deadwood. | Quelle: Ralph Martin | Copyright: Free for use in reporting on TUM, with the copyright noted. | Download
❮ ❯

The speed at which deadwood decomposes in forests depends on the climate as well as on fungi and insects. An international research team has now determined the annual contribution made by deadwood to the global carbon cycle and quantified the importance of insects in the decomposition of wood for the first time.

Living trees absorb a considerable amount of carbon dioxide from the atmosphere and therefore play an important role in the protection of our climate. Little is known about the role of dead trees in the global carbon cycle, though. The decomposition of wood and the recycling of the nutrients it contains are among the most important processes to take place in forests.

How much carbon is released from decaying wood worldwide? What role do insects play in this process? These questions have now been studied in a global research project established by the Bavarian Forest National Park and coordinated by the Julius Maximilian University of Würzburg (JMU) and the Technical University of Munich (TUM).

An experiment at 55 different locations provides the basis

At 55 forest locations on six continents, researchers laid out wood from more than 140 tree species to assess the influence of the climate on the rate of decomposition. Half of the wood was placed in mesh cages. These cages prevented insects from being involved in the decomposition and allowed quantifying their contribution to wood decomposition.

The collected data demonstrates that the rate of decomposition and the contribution of insects are highly dependent on the climate, and increase as the temperature rises. Higher levels of precipitation accelerate the decomposition in warmer regions and slow it down in regions where the temperatures are lower.

50 research groups worldwide completed the three year experiment, sometimes under exceptionally difficult conditions. It was necessary to use elaborate measures to protect some areas from elephants. One area was lost to a forest fire and reconstructed, while another area was flooded.

“On the basis of the experiment, we were able to model the role that deadwood plays in the global carbon cycle,” explains Rupert Seidl, Professor of Ecosystem Dynamics and Forest Management at the Technical University of Munich (TUM). “According to the report, some 10.9 giga-tons of carbon are released from deadwood worldwide every year. In this context, part of the carbon is absorbed into the soil, while another part is released into the atmosphere. The amount of carbon released from deadwood is equivalent to roughly 115 percent of the emissions from fossil fuels,” adds Dr. Werner Rammer, a scientist at TUM who played the leading role in the global calculations.

“At 93 percent, tropical forests contribute disproportionately to this result due to their high wood mass combined with their rapid decomposition processes. Decomposition in temperate and boreal forests is considerably slower indicating that deadwood stores carbon over long time periods in these regions. Insects account for almost one third of wood decomposition, although this is mostly confined to the tropics. In boreal and temperate forests, the contributions made by insects are small, though,” explains PD Dr. Sebastian Seibold, lead author of the study.

The effects of global change

“The study highlights the role played by deadwood in the global carbon cycle and the functional importance of insects in the decomposition of wood. In this way, we are closing another gap in the global modelling of carbon cycles,” explains Professor Jörg Müller, Head of Research at the Bavarian Forest National Park and the Ecological Station at JMU Würzburg.

“At a time of global change, we can see some dramatic declines in biodiversity and changes in climate. This study has demonstrated that both climate change and the loss of insects have the potential to alter the decomposition of wood, and therefore, the carbon and nutrient cycles worldwide,” explains PD Dr. Seibold.

Anhang der PM
Deadwood in the beech forest near the ecological station of the University of Würzburg. Fungi have set about decomposing the logs.