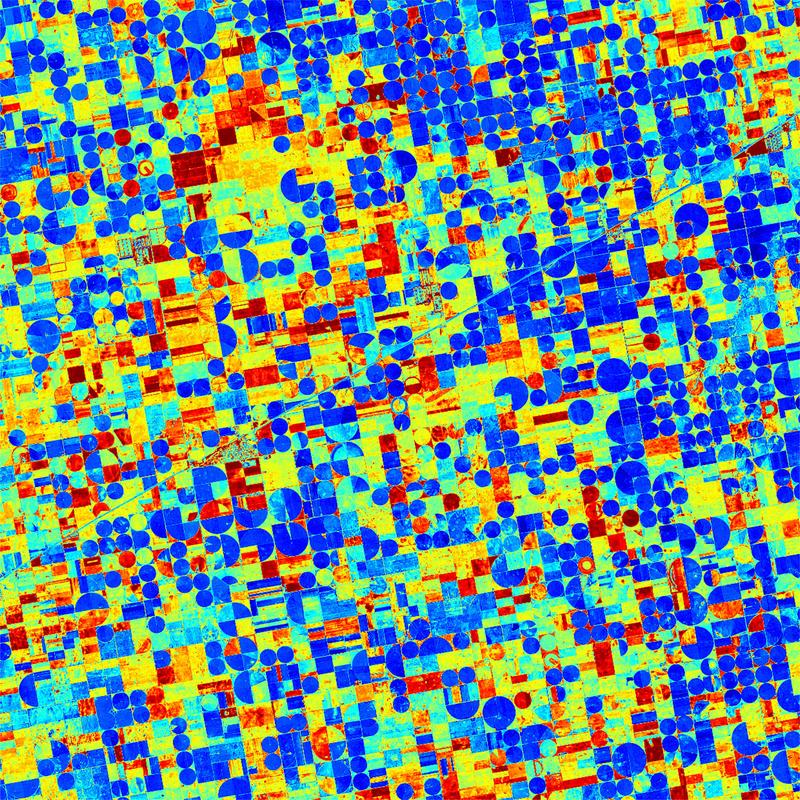 With a satellite system that measures drought stress in plants, two researchers from the Fraunhofer Institute for High-Speed Dynamics, Ernst-Mach-Institut, EMI, have now founded the spin-off ConstellR. Their technology enables the agricultural sector to optimize the irrigation of areas under cultivation to increase crop yields. The first sensor system will be launched into space in early 2022 and be installed on board the International Space Station (ISS).

The global population is growing — and demand for food is growing along with it. Since arable land is limited, farmers will need to harvest more from the same area in the future, meaning that cultivation will have to be improved, too. One important lever is an ideal supply of water — because when plants respond to drought stress, they invest less energy into their fruits, thereby reducing the harvest. One major problem is the difficulty of measuring the condition of plants on the vast arable land that spans the world. Although satellite data has been used since the 1970s to provide a general overview, it remains relatively inaccurate. To date, scientists have primarily used visual and near-infrared sensors that detect the plant pigment chlorophyll which breaks down when plants are not watered enough. “But by then, it’s already too late,” says Max Gulde, a physicist at the Fraunhofer Institute for High-Speed Dynamics, Ernst-Mach-Institut, EMI, in Freiburg. “What we need is a technology that tells us within the space of a few hours whether plants have sufficient access to water.”

Algorithms determine the temperature on the leaf’s surface

Max Gulde and his colleague Marius Bierdel at Fraunhofer EMI have taken on the task of developing precisely this type of technology. Satellite technology is applied here too, with the research team using an advanced thermal imaging camera in the satellite. Special algorithms evaluate the data to determine the temperature on the surface of the plants’ leaves, which enables researchers to draw conclusions on the water supply. When there is a water shortage, less water is evaporated through the leaves. This increases the temperature on the leaf’s surface. “Within the space of two hours, the temperature can change by two to three degrees Celsius,” explains Max Gulde. “Our method can measure temperature differences very precisely, to within a tenth of a degree.” In technical terms, the sensor measures the amount of energy emitted by the plants in the form of photons.

One challenge that arose during the development stage was how to factor out interfering heat emitted by the atmosphere, the Earth’s surface or from the satellite itself. This heat distorts the temperature data obtained from the leaf’s surface. Thanks to their algorithms, the EMI researchers also succeeded in overcoming this challenge. And it was the European Space Agency (ESA), no less, that confirmed how well the system works: “We weren’t sure about our approach until the ESA informed us that this was a real breakthrough. Before us, no one had been able to solve the problem of temperature measurement in such a compact system,” emphasizes Max Gulde. The data is downloaded from the satellites to ground stations, processed in data centers, prepared for the user and finally transferred to the agricultural users’ app.

The technology’s key advantage is that data and information about the water supplied to plants is available after just a few hours. As a result, farmers can adjust their irrigation levels practically in real time to specifically water those fields or plants that are most affected. Moreover, pinpoint precise irrigation systems help to save water and enable more accurate crop forecasts. This means that prices for agricultural products can be calculated accordingly at an early stage because farmers can predict how badly a drought could damage their crops many weeks in advance. “This provides agricultural producers with significantly increased planning security,” clarifies Gulde.

The new technology is scheduled to go into operation in space aboard the International Space Station as early as the beginning of 2022. “I am very pleased that Fraunhofer EMI’s first spin-off will use the technologies developed at the institute to help optimize the irrigation of fields and arable land as well as the yield of crops worldwide. This improves food security for people around the world and represents significant progress, especially in times of climate change,” enthuses Professor Frank Schäfer, Head of the Systems Solutions department at the institute.

Gulde and Bierdel founded the company ConstellR to further develop and commercialize the technology. Since 2015, the two scientists have been involved in research on the ERNST nanosatellite mission, which uses a compact thermal imaging camera. They came up with the idea of equipping their own satellites with high-resolution spatial thermal imaging cameras for temperature measurement in 2017. At the time, the task for young researchers was to design the smallest satellite with the greatest benefit for society as part of the European Copernicus Masters competition. The EMI researchers were accepted into a startup program — known as an accelerator — with their idea. “It was thanks to our involvement in that program that we learned all the basics of entrepreneurship,” describes Max Gulde. But it was only a grant of 1.8 million euros from the German Federal Ministry for Economic Affairs and Energy — ten percent of which was awarded by Fraunhofer EMI — that enabled them to develop the satellite system and found ConstellR.

The two experts will leave the Fraunhofer-Gesellschaft at the end of 2022 to devote themselves fully to their development company. Their research has already resulted in three patents.