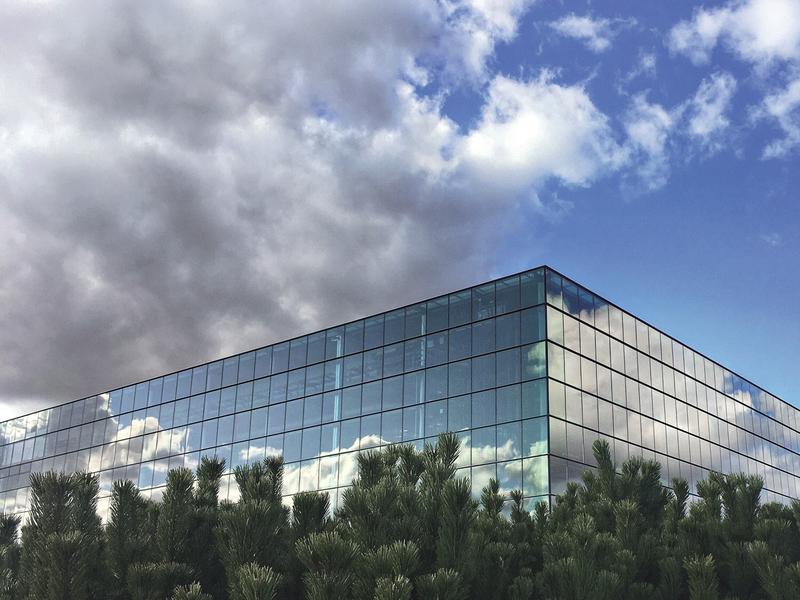 For buildings with large glass façades, installing electrochromic or thermochromic windows can save up to 70 percent of heating and cooling energy consumption. | Copyright: Fraunhofer | Download

Fraunhofer researchers have developed an intelligent coating for glass windows that darkens in the sun. This uses electrochromic and thermochromic materials that react to electricity and heat. In buildings with large glass façades, it stops the rooms from getting too hot because of solar radiation, thereby reducing the demand for energy-intensive air conditioning.

The building sector is one of the biggest emitters of greenhouse gases. According to the German Environment Agency, buildings are responsible for around 30 percent of the country’s CO2 emissions and 35 percent of its final energy consumption. Buildings with large glass façades and roofs are particularly problematic, such as the office towers that dominate modern cities. They heat up in the sun, especially in summer. However, using blinds and jalousies to provide shade is often unpopular, as they detract from the aesthetic appeal of the glass and disturb the view outside. Instead, the interior is cooled with air conditioning, which requires enormous amounts of electricity and increases the carbon footprint of the building.

The Fraunhofer Institute for Silicate Research ISC in Würzburg and the Fraunhofer Institute for Organic Electronics, Electron Beam and Plasma Technology FEP in Dresden have developed a sophisticated solution to this problem. In the Switch2Save project, researchers have been working on transparent coatings for windows and glass façades using electrochromic and thermochromic materials. These add a variable, transparent dark tint to the outside of the windows, which keeps the rooms cool. The Fraunhofer Institutes have partnered with universities and industrial partners across six EU countries for this EU-funded research project.

“The electrochromic coating is applied to a transparent, conductive film which can then be “switched on”. Applying an electrical voltage triggers the transfer of ions and electrons, which darkens the coating and tints the window. On the other hand, thermochromic coating works passively. When a certain ambient temperature is reached, it reflects the heat radiation of sun,” explains Dr. Marco Schott, Group Manager of Electrochromic Systems at Fraunhofer ISC.

With electrochromic elements, sensors can be used to measure factors such as brightness and temperature, sending the results to control systems. This sends a current or voltage pulse to the conductive film, triggering the window to darken. The surface of the glass gradually darkens whenever the temperature or brightness level becomes too high. This stops rooms from becoming overheated and reduces the need for air conditioning, which is particularly useful in sunnier climes and buildings with large, glazed façades. It also serves as anti-glare protection on sunny days. On cloudy days and in the evening the windows will be kept in bright state.

Fraunhofer researchers have also thought about the suitability of the technology for everyday use. “The windows don’t turn dark suddenly, but are gradually tinted over a few minutes,” explains Schott. Energy consumption is very low. In optimal circumstances, electrochromic film only requires electricity for the switching process and a very low voltage is enough to initiate the tinting process. Thermochromic materials do not require electricity at all, instead reacting passively to the heat generated by the sun. They can be used to complement a switchable system or as an alternative, where a switchable solution is not required.

Demonstration buildings in Athens and Uppsala

Switch2Save promises huge energy savings in areas where outside temperatures are high, i.e., in southern regions, by reducing use of air conditioning systems or removing the need for them entirely. Dr. John Fahlteich, Switch2Save Project Coordinator and Head of the Research Group at Fraunhofer FEP, explains: “In warm regions of Europe, the cooling and heating energy demands of modern buildings can be reduced by up to 70 percent.” Savings are not so extensive in colder, northerly regions, but the systems could also be used here as anti-glare protection against direct sunlight.

In principle, the combination of electrochromic and thermochromic layers in a composite window offers the greatest possible flexibility. By using this, architects and developers can provide individual solutions for a variety of regions and buildings. “We are in the process of installing the technology in the Pediatric Clinic of the second-largest hospital in Greece, in Athens, and an office building in Uppsala, Sweden. In both buildings, energy consumption will be monitored and compared for a whole year both before and after installation of the new windows. By doing this, we can demonstrate the real-life performance of the Switch2Save technology and can continue to test and refine the technology for different climate zones,” says Fahlteich.

The researchers have also resolved challenges for manufacturing. The electrochromic coating is applied to a polymer-based film substrate. The thermochromic coating, on the other hand, uses a thin glass substrate. Wet chemical and vacuum coating processes are used in a cost-effective roll-to-roll manufacturing system. The switchable components are then laminated under vacuum onto a 4 mm thick sheet of window glass, which is integrated to an insulating glass unit thereafter. The coating process is also economically feasible on an industrial scale. The electrochromic and thermochromic switchable elements are only a few 100 μm thick and less than 500 g per square meter. Thus, they hardly add any weight to the windows, which means that they can be retrofitted in existing buildings without needing to alter the building structure.

The project consortium is currently working on improving the technology further. For example, the team of experts is researching how electrochromic and thermochromic elements can be combined in a composite window to make even better use of the technology’s potential. Further research objectives include adapting the coating to curved glass forms and adding more colors to the existing options of blue and gray.

Global warming and the objectives of the European Green Deal will significantly increase the demand for energy-efficient building technology in the next few years — and all buildings in the EU are expected to be carbon neutral by 2050. The electrochromic and thermochromic windows of the EU Switch2Save project can make an important contribution to this.