How much energy do we need to achieve a decent life for all? 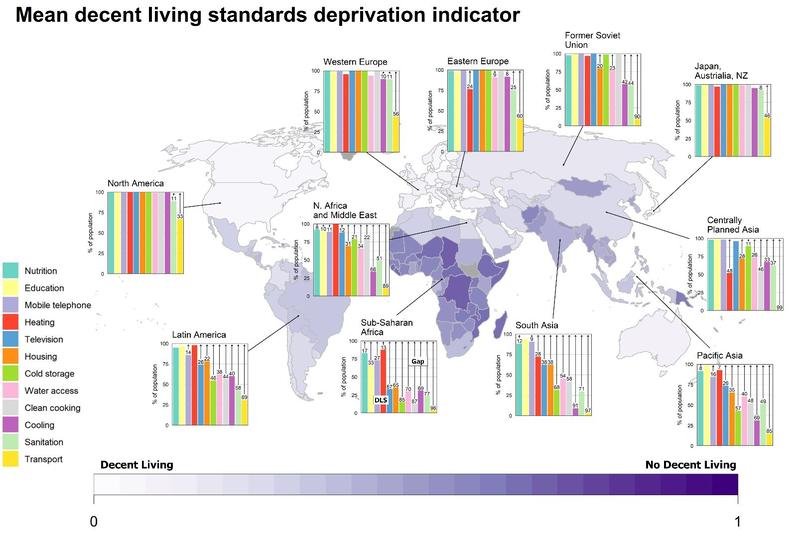 For many, an increase in living standards would require an increase in energy provision. At the same time, meeting current climate goals under the Paris Agreement would benefit from lower energy use. IIASA researchers have assessed how much energy is needed to provide the global poor with a decent life and have found that this can be reconciled with efforts to meet climate targets.

In the fight to eradicate poverty around the world and achieve decent living standards (DLS), having sufficient energy is a key requirement. Despite international commitments such as the UN Sustainable Development Goals, in many areas progress on achieving DLS worldwide has been slow. There are also fears that improving energy access could lead to higher carbon dioxide emissions, which would interfere with goals to alleviate climate change.

In a new study published in the journal Environmental Research Letters, IIASA researchers used a multidimensional approach to poverty to conduct a comprehensive global study on DLS. The researchers identified gaps in DLS by region and estimated how much energy is needed to fill them. They also assessed whether providing everyone with a decent life is compatible with climate goals

Studies on poverty often use an income-based definition for defining poverty thresholds ($1.90/day or $5.50/day), which obscures that there are other factors contributing to human wellbeing more directly. In contrast, DLS represent a set of material prerequisites to provide the services needed for wellbeing, such as having adequate shelter, nutrition, clean water, sanitation, cooking stoves and refrigeration, and being able to connect physically and socially via transportation and communication technologies. Crucially, this allows for calculation of the resources needed to provide these basic services.

The largest gaps in DLS were found in sub-Saharan Africa, where more than 60% of the population are lacking in at least half of the DLS indicators. The researchers also identified high DLS deprivation in indicators such as sanitation and water access, access to clean cooking, and thermal comfort in South and Pacific Asia, and more moderate gaps in other regions. One of the most striking findings of the study was that the number of people deprived of basic needs according to DLS generally far exceeds the number of people in extreme poverty, meaning that current poverty thresholds are often inconsistent with a decent life.

When looking at which components of DLS require the most investment in energy, the researchers identified shelter and transport as having the largest share.

“The majority of the global population does not currently have decent levels of motorized transport. An important policy lesson for national governments is the large impact of investing in public transit to reduce the use of passenger vehicles, which generally have much higher energy use per person,” says Jarmo Kikstra, lead author of the study and a researcher in the IIASA Energy, Climate, and Environment Program.

The upfront energy required globally to build new houses, roads, and other materials to enable DLS provision for all from 2015 to 2040 is about 12 exajoules per year. This is only a fraction of current total final energy use, which exceeds 400 exajoules per year. The increase in annual energy for operating this increase in services, including maintenance costs, is more substantial, eventually increasing by about 68 exajoules. For some countries, reaching this goal would require robust changes in development, which will be challenging, especially in the Global South.

“For most countries, especially many poor countries in Africa, unprecedented growth in energy use as well as more equitably distributed growth are essential to achieving DLS before mid-century,” Kikstra adds. “Therefore, the biggest challenge for policymakers will be to achieve an equitable distribution of energy access worldwide, which is currently still out of reach.”

According to the study, the amount of energy needed for decent living worldwide is less than half of the total final energy demand projected under most future pathways that keep temperature rise below 1.5°C. This indicates that achieving DLS for all does not have to interfere with climate goals. While this ratio changes in different climate mitigation scenarios and by region, the energy needs for DLS always remain well below the projected energy demands on the level of larger global regions.

“To achieve decent living conditions worldwide, it seems that we do not have to limit energy access to basic services as there is a surplus of total energy. What is perhaps unexpected is that even under very ambitious poverty eradication and climate mitigation scenarios, there is quite a lot of energy still available for affluence,” says study author Alessio Mastrucci.

“Our results support the view that on a global scale, energy for eradicating poverty does not pose a threat for mitigating climate change. However, to provide everyone with a decent life, energy redistribution across the world and unprecedented final energy growth in many poor countries is required,” concludes study author, Jihoon Min.

The International Institute for Applied Systems Analysis (IIASA) is an international scientific institute that conducts research into the critical issues of global environmental, economic, technological, and social change that we face in the twenty-first century. Our findings provide valuable options to policymakers to shape the future of our changing world. IIASA is independent and funded by prestigious research funding agencies in Africa, the Americas, Asia, and Europe. www.iiasa.ac.at