Geckos glide, crash-land, but don’t fall thanks to tail 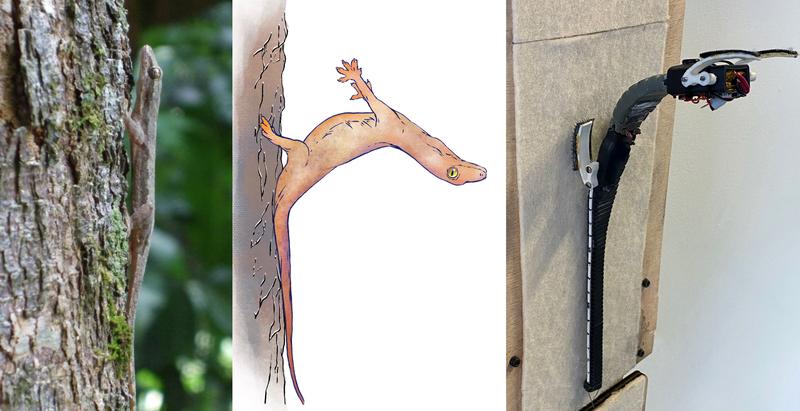 A scientific study published in Nature Communications Biology shows that geckos are capable of gliding. In the publication titled Tails stabilize landing of gliding geckos crashing head-first into tree trunks, the authors present footage showing that geckos with no major specializations for flight are in fact capable gliders. Experiments with a gecko-inspired robot confirm the reptile’s locomotion abilities are not entirely down to its feet. The tail plays just as much a pivotal role, the team from the Max Planck Institute for Intelligent Systems in Stuttgart, Siena College in New York, and the University of California at Berkeley discovered.

Stuttgart – Geckos’ impressive climbing abilities give them agility rarely surpassed in nature. With their highly specialized adhesive lamellae on their feet, geckos can climb up smooth vertical surfaces with ease and even move on a ceiling hanging upside down. Their ability to run on water adds is another superpower. Now another can be added.

A scientific study published on September 2nd 2021 in Nature Communications Biology by researchers who work at the intersection between robotics and biology shows the geckos are capable of even more. In the publication titled Tails stabilize landing of gliding geckos crashing head-first into tree trunks, the authors Rob Siddall, Greg Byrnes, Robert Full, and Ardian Jusufi present footage showing that geckos with no major specializations for flight are in fact capable gliders. Experiments with a gecko-inspired robot confirm the reptile’s locomotion abilities are not entirely down to its feet. The tail plays just as much a pivotal role, the team from the Max Planck Institute for Intelligent Systems in Stuttgart, Siena College in New York, and the University of California at Berkeley discovered.

In their work, the scientists begin by showing that the multi-talented lizard known as Hemidactylus platyurus is capable of gliding. In its natural habitat, it lives in trees and can jump many meters from one tree trunk to the next to avoid predators. When trees are close and the jump is short, the gecko is still accelerating so that everything between jump and landing happens at the blink of an eye. The gecko experiences an unbraked collision. Surprisingly, the gecko can cope with smashing full-on into a tree trunk.

Ardian Jusufi, who initiated the study, set up several experiments in a wildlife reserve in the rainforests of Singapore. At the Max Planck Institute for Intelligent Systems, he leads the Cyber Valley research group “Locomotion in Biorobotic and Somatic Systems”. He has spent many years investigating geckos and their many locomotion abilities. In the tree canopy, Jusufi explored a situation where reptiles both with and without a tail face the challenge of a short accelerating glide.

Placed on a platform seven meters above the ground, a tail-equipped gecko leaps down into the deep and glides to a nearby tree. High-speed cameras capture the fall and show that the jumping gecko reaches 6 m/s, just over 21 km/h. Unlike a car that would be heavily dented after driving into a tree at this speed, the footage shows the gecko lands on the trunk without falling off. It moves away as if nothing happened. With tailless animals, it was quite the opposite. Geckos who had naturally lost their tails couldn’t maintain their grip after the crash and, consequently, fell off the tree trunk after landing.

As can be seen in the corresponding video, the mechanism the animal applies to cushion the impact is bending its torso backward as far as 100 degrees. During the bend, the front feet lose grip. Only the rear legs remain attached. This pitch-back of the torso dissipates energy as it pushes the tail hard into the trunk. Animals that have lost tails could not dissipate sufficient energy and fell. The tail acts as a fifth leg, helping the gecko stabilize after the impact, they believed. But without a control experiment can one conclusively show that the tail has this stabilizing effect? Hence, they set off to the lab.

The scientists created a physical model of a gecko to better understand the forces the animal experiences. Their gecko-inspired robot features a soft torso, where the tail can be taken off and put back on. When the front foot hits a surface, the robot is programmed to bend its tail just like the reflex that Jusufi discovered previously in climbing geckos. The information is processed via a microcontroller on the shoulder. This signal activates the motor to pull on a tendon and hence pushes the tail into the wall to slow the head over heels pitchback.

Back in the Locomotion in Biorobotic and Somatic Systems lab, Robert Siddall and Ardian Jusufi began by catapulting a soft robotic lizard onto a wall with an embedded force-sensitive scale (the simulated tree trunk) which is lined with felt, to which the robot’s Velcro-lined feet can stick. The robot hit the force plate as abruptly as the geckos hitting the tree, tilting back its torso at a right angle to the surface. The roboticists then measured the force the front and back feet of the robot endured upon impact. The longer the tail, they discovered, the lower the force pulling the back feet away from the surface. The lower that force, the easier it is for the robot (and likely the animal) to hold on. Without a tail, however, the forces on the back feet become too high – the robot loses grip, bounces off, and falls. This experiment validated the scientists’ hypothesis that the tail is essential for the gecko to be able to stabilize itself on a vertical surface after colliding with it at high speed – findings that could make a significant contribution to robot landings and beyond.

“This field discovery on the perching behavior of geckos has important implications for our understanding of tails as multi-functional appendages that animals can rely on. Ranging from inertial to contact tails, they facilitate the most extreme transitions, such as from gliding flight to collision with a wall,” says Ardian Jusufi, the senior and corresponding author.

“One of the most dramatic transitions we can think of in multi-modal locomotion is to alight on a vertical surface from high-speed gliding flight to a standstill,” continues Ardian Jusufi.

Larger gliding specialists appear to avoid engaging in short glides, as there is not sufficient vertical drop height to reach terminal velocity, stop accelerating, and begin a dedicated landing maneuver with a stall prior to impact. Smaller animals may be able to use mechanically mediated solutions to negotiate such situations.

However, no one had ever quantified this amazing animal’s gliding behavior before. Such video material from the rainforest is hard to come by. “Our attempts to film the small, camouflaged lizard in the rainforest revealed a fall arresting response nobody thought these geckos could do and showed us their tails were entirely underestimated. Previously contact tails were thought to be used to maintain grip during rapid wall-running, while the findings presented here suggest that geckos exhibit exaptation of the behavior to improve the success of landing in the wake of their directed aerial descent,” says Jusufi.

“With the robot, we were able to measure something we could not with geckos in the field. The wall reaction forces at the impact upon landing confirmed that the tail is an essential part facilitating the landing in subcritical glides. Our soft robotic lander not only helps to make an impact in another field, but it can also help improve robot locomotion by increasing robustness and simplifying control,” explains Ardian Jusufi.

"Nature has many unexpected, elegant solutions to engineering problems - and this is wonderfully illustrated by the way geckos can use their tails to turn a head-first collision into a successful perching maneuver. Landing from flight is difficult, and we hope our findings will lead to new techniques for robot mobility – sometimes crashes are helpful," Robert Siddall describes.

Contact Information for Comments on Article from Investigators Not Involved in this Research: