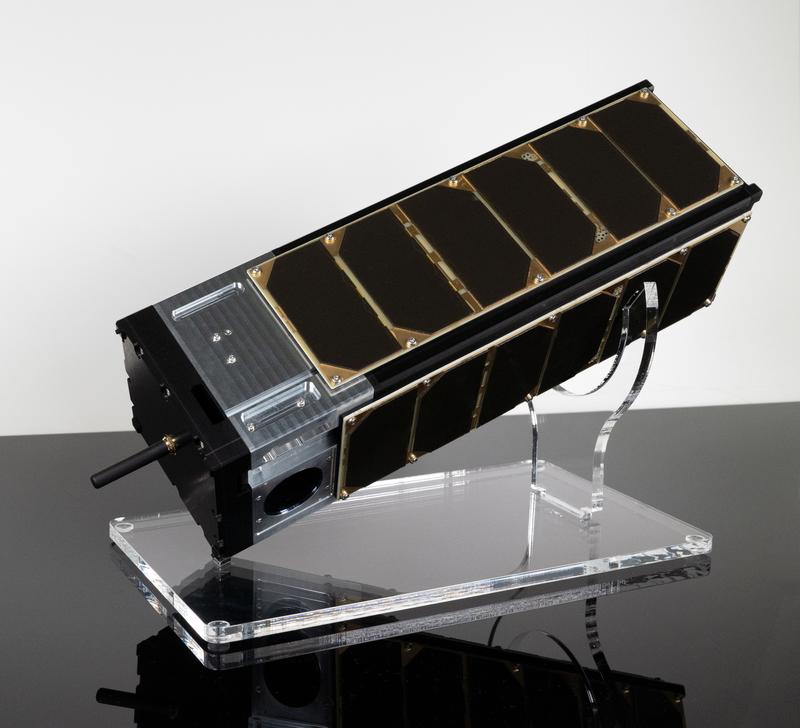 In June, the W-Cube nanosatellite began its journey aboard a Falcon 9 rocket from Cape Canaveral to polar orbit. About a month later, it was placed in its orbit at an altitude of 500 kilometers and has now been successfully transmitting test signals to Earth in the Q and W band since August. It collects important data for the development of new frequency ranges for future satellite communication systems. The development of the W-Cube took place in the course of the joint project “ARTES”. Fraunhofer IAF developed the transmitter module of the satellite and the receiver module of the corresponding ground station.

Capacity requirements for data transmissions are increasingly on the rise. New data highways for digital consumption are being researched worldwide, because the common frequencies are already in short supply today. In order to connect new, powerful satellites to the Internet in the future, the project ARTES, short for Advanced Technology CubeSat-based W-band channel measurements, is testing unused frequencies in the Q and W band (37.5 and 75 GHz). The project is the world’s first low Earth orbit (LEO) mission in this frequency range.

Before the satellite could start its journey, the hardware had to be developed and built in the first half of the project. Fraunhofer Institute for Applied Solid State Physics IAF developed the transmitter modules and extremely low-noise receiver modules, which are core components. The launch of the nanosatellite now marks the beginning of a two-year measurement campaign in which test signals are routinely received and processed on the ground.

To be able to use new frequency bands for satellite communications in the future, measurement campaigns are needed that characterize the specific atmospheric channel propagations. “Not every frequency range is suitable for all transmissions. That’s why it’s important that we take a close look at the effects of weather on frequencies,” explains project coordinator Dipl.-Ing. Michael Schmidt form JOANNEUM RESEARCH.

On its test mission, the W-Cube nanosatellite orbits the Earth in low Earth orbit (LEO). Although this differs from future operational satellites that will use the W band in a geostationary orbit (GEO), the proximity to Earth allows decisive time advantages in measurements, and the influence of weather conditions hardly changes. Based on the measurement data, a statistical model that will enable the planning and dimensioning of future satellite links in this frequency range will be developed.

Precise and informative measurements of channel propagation between orbit and earth require highly sensitive and extremely low-noise electronics. Based on its extensive expertise in this research area, Fraunhofer IAF has developed RF front-ends for both the satellite itself and the ground station as part of the project. The RF components consist of frequency multipliers as well as driver and power amplifiers for the Q and W band.

“One of the biggest challenges in terms of RF hardware, besides the sensitivity of the receiver, was to develop a transmitter module with sufficient output power up to W band to ensure an optimal signal-to-noise ratio (SNR) even under less than ideal atmospheric conditions,” remembers Dr.-Ing. Markus Rösch, project manager on the part of Fraunhofer IAF. Rösch’s team succeeded in designing transmitter modules with the necessary power by using the institute’s own technology. These components were built in split-block housings, as were the frequency multipliers.

About the joint project ARTES

The development of the W-Cube took place in the course of the joint project “ARTES – Advanced Technology CubeSat-based W-band channel measurements.” The project consortium consists of: JOANNEUM RESEARCH (project coordinator), Fraunhofer IAF, LC Technologies (LCT), Millimetre Wave Laboratory of Finland (MilliLab), Reactor Space Lab Oy (RSL), the University of Stuttgart and the Katholieke Universiteit Leuven. During the first two successfully completed project phases, the nanosatellite and a corresponding ground station were developed and built, which are now collecting data for the exploitation of the Q and W band from low Earth orbit (LEO) in the third project phase. Fraunhofer IAF developed the high-frequency front-ends for the satellite and the ground station, including Medium Power Amplifiers (MPAs), Low Noise Amplifiers (LNAs), frequency multipliers and mixers.

The project is supported by the European Space Agency (ESA) and funded by the participating countries Austria, Finland, Portugal and Germany. On the German side, the German Aerospace Center (DLR) backs the project.

The Fraunhofer Institute for Applied Solid State Physics IAF is one of the world's leading research institutions in the fields of III-V semiconductors and synthetic diamond. Based on these materials, Fraunhofer IAF develops components for future-oriented technologies, such as electronic circuits for innovative communication and mobility solutions, laser systems for real-time spectroscopy, novel hardware components for quantum computing as well as quantum sensors for industrial applications.
With its research and development, the Freiburg research institute covers the entire value chain - from materials research, design and processing to modules, systems and demonstrators.
www.iaf.fraunhofer.de/en