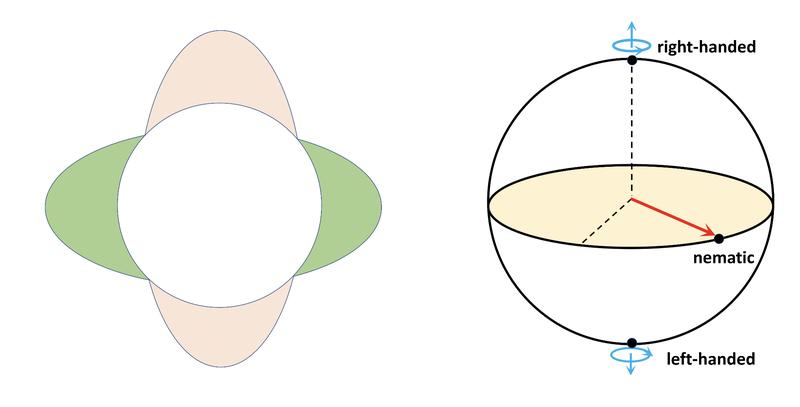 Researchers at the Max Planck Institute for the Structure and Dynamics of Matter (MPSD) in Hamburg and RWTH Aachen University have suggested a surprising connection between the nematic behavior of a superconductor in a magnetic field — a state that resembles liquid crystals used in LCDs — and its spiral-like groundstate in the absence of the field. Their theory could not only explain recent experiments on twisted bilayer graphene at the so-called magic angle, but would also point to potential applications in topological quantum computing. The team’s findings have now been published in Physical Review Letters.

In conventional superconductors — materials that conduct electricity without losses — the collective wavefunction of superconducting electrons in the material (the ‘superconducting order parameter’) looks the same in all directions in space. Like a circle, it can be rotated without changing its shape. By contrast, unconventional superconductors have an order parameter that does not look like a circle, but can have lobes like a blossom and only returns to itself when rotated by certain angles (see figure, left panel). Such unconventional order parameters can even be combined to form spiral-like, handed states. These are states which — like left and right hands — do not look the same in a mirror, but instead a right-handed state turns into a left-handed one as its mirror image, and vice versa.

Now postdoctoral researcher Tao Yu from the Emmy Noether group at the MPSD and colleagues put forward the theory that such spiral-like states can lose their handed character but instead attain the nematic state when they are exposed to a magnetic field. In the nematic state, known from liquid crystal displays, long molecules align to all point in the same direction like little needles do in a magnetic field. In the superconductor, the consequence of this nematic state is that electrons carry electricity better in one direction (from left to right) than in the other (from top to bottom). “Imagine that you have a circle with an arrow along its edge, for instance a clock on which the arrow shows the clockwise rotation of the clock’s hands“, explains Yu. “Now you start compressing the clock by pushing from left and right until you have completely squeezed it into a line. At this point, you cannot tell the handedness anymore because the 9- and the 3-o’clock positions are identical.“ The magnetic field effectively squeezes the handed superconductor until its electrons prefer to move in the same direction.

The physics can also be illustrated by the Bloch sphere (see figure, right panel), which is formed by all the different shapes and orientations of the clock. „The south pole is the usual clock with a left-handed, clockwise rotation of hands. The north pole is its mirror image. The equator has different orientations of nematic states without handedness. The effect of the magnetic field on the material is to move the arrow from one of the poles to the equator in this picture“, says Yu.

The theorists’ interest in this problem was sparked by a recent experiment in the group of Pablo Jarillo-Herrero at the Massachusetts Institute of Technology, published in Science earlier this year. There, the researchers observed nematic behavior in magic-angle twisted bilayer graphene which was exposed to a magnetic field. Twisted bilayer graphene is one of the most-studied and fascinating materials of the past few years. “That paper did not draw the connection between the observed nematic behavior and underlying handed states,“ says Dante Kennes, co-author of the study and professor at RWTH Aachen University. “It remains to be seen whether our theory explains the nematicity in magic-angle graphene, or whether it has some other origin. This will require more experiments. However, our theory does not only apply to this material, but is more general.“

Michael Sentef, Emmy Noether group leader at the MPSD and senior author of the study, says these are potentially groundbreaking results: “Intriguingly, the experiment may have revealed indirect evidence for handed superconductivity, which would be huge, if confirmed.“ However, he adds, it also illustrates a more fundamental issue: “What I find equally fascinating is how the idea was conceived. Tao worked on the optical manipulation of handed states, in which we showed that handedness can be flipped by laser pulses, an idea developed by some of us a few years ago (see this Press Release). When he saw the paper by the Jarillo-Herrero group, he connected the dots and realized that a magnetic field can have a very similar effect to a laser pulse.“

In Sentef’s opinion, this points to an important lesson: “The recently deceased Nobel laureate Steven Weinberg once wrote that one of the key insights from his impressive research career was that one should forgive oneself for wasting time. I believe what he meant was that research is not always straightforward and it is incredibly hard to predict which problems are worthwhile pursuing. Here we have a perfect example of a truly serendipitous finding — an unplanned discovery that is only possible when we have the opportunity to deeply think about nature without exactly knowing where this will lead us. The MPSD is a land of ideas which provides such opportunities, and I sincerely hope it will remain this way.“

Full image caption: Left panel: Blossom-like structure of the superconducting order parameter in one of the possible unconventional superconducting states, which only returns to itself when rotated by multiples of 180 degrees. Right panel: Bloch sphere displaying different states of the superconducting order parameter. The south pole represents the left-handed state (a specific mix of two different blossom-like states like the one displayed in the left panel), the north-pole its right-handed mirror image. Under a magnetic field, the system is forced into a non-handed, but nematic state (red arrow at the equator).