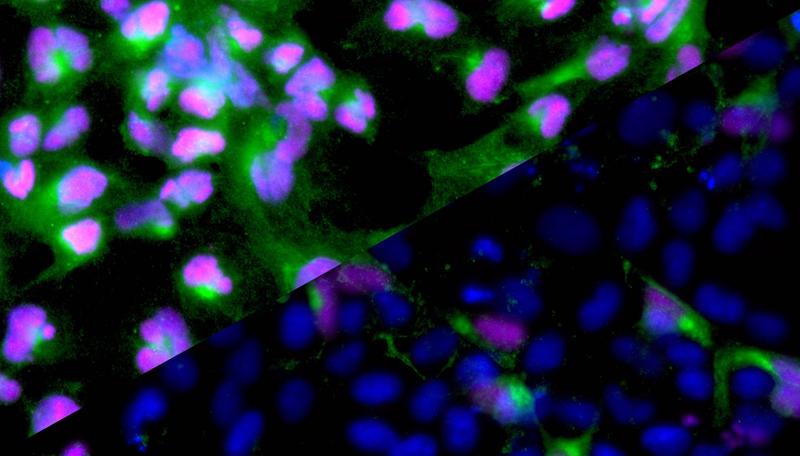 DNA segments with joint functions often cluster in loops. However, many of these tightly separated genetic areas contain only one gene each – preferably one that plays a prominent role in the development of the embryo. Here, genes enjoy protection from external interference.

Under the microscope, our genome looks like a wild tangle of string stuffed into the cell’s nucleus. But while it appears as a chaotic mess, almost every little sling and loop in the genetic thread also has its function. These DNA loops, which are often referred to as “loop domains,” usually contain genes and accompanying sequence segments that precisely control the gene’s activity.

As an international research team has discovered, the loop domains could serve to isolate genes and thus protect them from interference by other DNA regions. Especially genes that have particularly important tasks during embryonic development claim a loop in the human genome only for themselves and their regulatory sequences. Once the researchers removed the loop around the developmental gene SOX17, for example, development of embryonic cells was compromised.

The results have now been presented by a team of researchers from the Max Planck Institute for Molecular Genetics (MPIMG) in Berlin, the Dana-Farber Cancer Institute in Boston, USA, Harvard University in Cambridge, USA, and Peking University in Beijing, China, in the journal Nature Communications.

“We are interested in the role of the three-dimensional genome structure in human stem cells,” say Alexander Meissner of the MPIMG and Franziska Michor of Dana-Farber Cancer Institute and Harvard University, both lead authors of the study. “We wanted to add a systematic investigation to the discussion that linked gene function to the number of genes within loop domains of the human genome.”

The DNA loops represent three-dimensional functional units, also known as topologically associating domains (TADs). They are held together by the proteins CTCF and cohesin that attach to specific sequences and act much like the cord stopper on a drawstring: They draw the thread of DNA into a loop shape. A TAD loop usually contains one or more genes and their regulatory elements. These interact extensively with each other, while there is little interaction beyond the boundaries of the domain. Almost half of all protein-forming genes are located in such loops – alone or together with other genes. Disruptions of these structures at sites with developmentally relevant genes result in rare developmental disorders and malformations.

The researchers initially used human embryonic stem cells for their studies. Using the “Hi-C” method, they were able to measure which areas of the DNA contact each other preferentially as a result of the folding. They then used these contact points to predict the 3D structure of the DNA, i.e. how the DNA strand is arranged in space.

“We were very surprised to find that there is only one gene in almost 40 percent of the loop domains,” says Hua-Jun Wu of Peking University, one of the study's first authors. In contrast, one-fifth of the genomic loops are empty and contain no genes at all, and about two-fifths are populated with multiple genes.

The researchers did find genes from all functional areas of the cell in the single-gene domains. “Especially genes with an essential function for embryonic development seem to prefer a loop domain for themselves alone. Compared to all other genes, they are overrepresented in single-gene loops by 50 percent,” says the researcher.

Over a period of up to six weeks of embryonic development, the single-gene domains seemingly remained unchanged. In the early embryo, the developmental genes, along with their associated regulators, have been left undisturbed.

“Isolating the most important genes into clearly defined areas that are protected from external influences makes sense,” Wu says. “Developmental genes are subject to particularly tight control anyway, since the slightest change in gene activity can have far-reaching consequences, such as interfering with the regulation of other genes and thus disrupting the entire delicate process of embryonic development.”

In fact, this principle of isolation is widespread in the mammalian kingdom and has stood the test of evolution, the researchers noted. They compared sequence data from 45 animal species and found that the boundaries of single-gene domains have not changed much, if at all, over the course of mammalian evolution.

But what happens when an isolated gene loses its privilege? The researchers addressed this question using induced pluripotent stem cells (iPS cells). The scientists selectively removed the loop structure around the gene SOX17. This developmental gene is important for the formation of the inner cell layers of the embryo, the endoderm, and thus for the development of organs such as the liver, pancreas and intestine. It is also known for its particularly strong isolation.

The researchers excised the region from the genome that helps the DNA strand tighten like a sling and observed how gene activity changed. “The SOX17 gene lies in a classic enhancer loop. If it loses contact with its regulator, the enhancer, it can no longer be activated,” said Alexandro Landshammer, the other first author of the paper. “Regulators of other genes can't rescue SOX17, that’s why we saw very few cells with the gene still turned on in our experiments.”

But not only did SOX17 stop being active, other genes that are important for the formation of endoderm cells also remained silent. This is because SOX17, in turn, activates other developmental programs and thus new genes.

As a counterexample, the scientists chose the gene NANOG, which shares a loop domain with several other genes. Here, breaking the loop structure had no measurable effect, highlighting the importance of the structure around isolated genes.

“We believe that loop domains could be a security feature of the genome. The isolated genes are shielded from the influences of neighboring sequence segments,” Meissner says. “Embryonic development follows a fixed roadmap, where genes need to be activated in specific tissues for precisely defined periods of time. The smallest deviations can have devastating consequences.”

“Genes may not be equal in their sensitivity to pertubation,” says Meissner. Misregulation of other somatic genes may possibly lead to malformations or tumors, but are not immediately lethal for the organism. However, to prove this hypothesis, loop domains would have to be studied further, says the researcher.

Nevertheless, the scientists see opportunities for treatments that might alter the 3D structure of DNA – some research teams have already succeeded in doing so. “The exciting developments in the field suggest that mutations in domain boundaries could one day serve as diagnostic markers or drug targets,” Michor says. “Our study may help focus on the most essential and tightly regulated genes of early embryonic development.”